The process of appointing senior advocates is broken and no one has bothered to fix it, until now

“If the stakes are very high, clients expect a senior counsel," said a litigation partner at a national law firm. “There is a perception that a judge would tend to lend more gravitas to the submissions of a senior… In the Supreme Court, I would say this is true in the case of most judges—i.e., they want to hear senior counsel."

However, in the bar, many now argue that the senior counsel tag has lost its sheen because the process of appointing new ones has become opaque and arbitrary.

Arguments concluded last week on a petition filed by two advocates seeking the quashing of the Karnataka high court’s 2014 designations of 15 senior advocates, with the Supreme Court ordering the high court to hear the case.

And lawyer Indira Jaising, who is something of a path-breaker, being the first woman to be designated a senior advocate by the Bombay high court in 1986, last week filed a public interest litigation (PIL) against the Supreme Court, the Bar Council of India (BCI), the law ministry, attorney general and the associations of the Supreme Court bar and advocates on record.

According to Jaising’s petition, which is to be argued by senior counsel Fali Nariman, “there is no transparency in the procedure, no criteria laid down for determining excellence in advocacy and no rational nexus between the persons designated and their excellence or no rational reason for rejection of persons of eminence and ability".

Jaising argued that “several persons who in her opinion were deserving of designation and all of whom had recommendation of not less than five judges" had been excluded from the most recent round of elevations.

The process had become analogous to a “beauty contest", said Jaising, because since 2014 judges’ popular vote decided who to designate as senior advocates rather than “an informed discussion among judges on the merits of each candidate" or the prior convention of designating anyone who applied and who had at least five judges’ approval.

Judges who may never have seen or heard of an advocate, perhaps because of the types of matters some advocates handle, therefore invariably vote “no" under the new system, she argued.

In February 2014, out of 18 advocates who had recommendations from five judges, only two were eventually designated as senior advocates, according to Jaising. In April 2015, out of 14 applicants who had five judges’ support, only five made it.

Jaising’s Right to Information (RTI) application seeking the resumes of all those nominated for senior counsel has been declined.

“The system needs to be thoroughly overhauled. It must be truly merit-based and completely transparent," says Dushyant Dave, senior counsel and president of the Supreme Court Bar Association (SCBA). “The rules at present are very lopsided and open to nepotism and favouritism. Some of the best lawyers have as a result been denied designations all over the country while some really undeserving ones have managed to get designations."

The system of designating lawyers as senior advocates was created under the Advocates Act, 1961, emulating the English bar’s recognition of its most distinguished members as Queen’s Counsel (QC) and King’s Counsel (KC) (depending on the gender of the current regent) which has been around since the 16th century.

Since 2004, English QCs have been required to submit a lengthy application form and be interviewed by an independent panel of nine members, chaired by a non-lawyer. The CVs of new QCs are published online.

In India, in contrast, things are “arbitrary", “non-transparent", and “everything is left to gossip in the corridors of the bar", argues Jaising. Those who do get appointed enjoy a “de facto monopoly", she claims.

According to the numbers, only a tiny minority of advocates ever make it to the hallowed senior advocate ranks. At the Supreme Court, only 48 were designated from its advocates’ ranks from 1992. 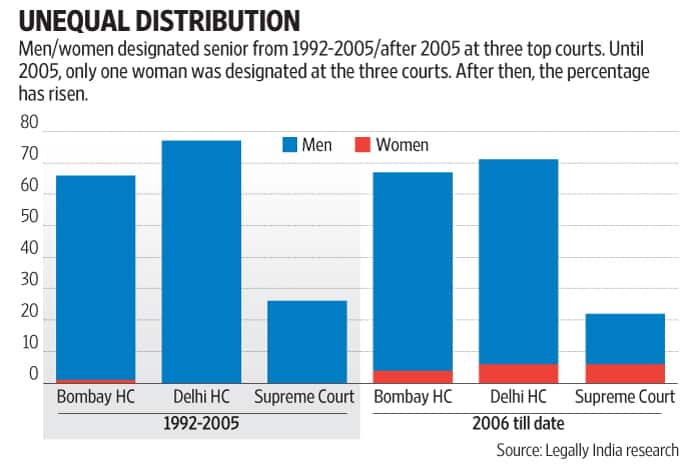 This constitutes only around 0.7% of the total membership of the SCBA, which counts the majority of Supreme Court advocates as its members; it has 6,992 lawyers on its 2015 member’s directory.

Only around 950 (13%) of the SCBA members are women. Between 1966 and 2013, only two new women lawyers were designated senior Supreme Court advocates—Leila Seth in 1977, before she became a Supreme Court judge, and Indu Malhotra in 2007.

In 2014 and 2015, women made up more than half of the lawyers designated as senior advocates (five out of nine), bringing the 23-year average to a more representative, albeit still low, figure of 12.5%.

A similar trend of an increasing number of women designated as senior lawyers has been seen at the Bombay and Delhi high courts (see chart), though some high courts have yet to elevate any women.

Jaising’s petition claims that because of its opacity, the system has also, in effect, been discriminatory of other minorities at the Supreme Court: since 2000, only one Dalit candidate, two Muslim advocates, “very few Christians" and no advocates from backward states like Uttar Pradesh and Chhattisgarh have been designated, while those from a “rural background are totally ignored".

And despite excellent advocates with disabilities practising, none have been designated as senior. Finally, Jaising argues, in the most recent round, four out of five designated belonged to the same caste.

“All people who are appointed come from rich, urban backgrounds and practise commercial law. Where are the Dalits, the tribals, the people who have been in the fields, where are the trade union lawyers?" asks senior advocate Colin Gonsalves, noting that only those who argue for industry and the wealthy generally get recognized. “There is a capitalist bias in the appointment of people... as if when they’re working for the poor, they’re unfit to become senior advocates."

“It doesn’t matter what criteria you fix, if you’re going to choose seniors from the top junior counsel, that is the upcoming people who are not seniors, typically in the early-40s, the so-called younger stars, they should be designated seniors."

All senior advocates spoken to agreed that the requirement of applying to become a senior advocate was somehow distasteful (despite the English QC system also requiring applications).

Senior advocate Arvind Datar says the system was changed after some judges had recommended unsuitable candidates for seniorship.

“I was designated as a senior in early 1969 by the Allahabad high court where I was then practising," recounts senior counsel Shanti Bhushan. “At that time, there was no procedure requiring a lawyer to apply for this honour. In those days, the chief justice would call you to his chamber to take your consent for being designated as a senior.

“I consider it below one’s dignity to apply for being conferred an honour. If today’s system had been in place in 1969, I would still be a non-senior as I would never have applied to be designated as a senior."

The majority of senior counsel get elevated in the high courts—in the last 23 years, the Bombay and Delhi high courts designated 133 and 148 new senior counsel, respectively. But there is little consistency in the process from one high court to another.

Chandhiok says: “Every high court and the Supreme Court has its own system and criteria for designating a lawyer/advocate, a senior advocate. There were occasions that those who had enough merit or were well deserving did not get the designation because the so-called ‘polling’ by the judges could not arrive at a majority support.

“Instances to the contrary were also there. It is very rare that a high court or the Supreme Court does confer the honour on an advocate without him/her applying for the same, based on his or her ability and standing at the bar."

“Worst is that some high courts and their chief justices have designated lawyers who have either never appeared in those courts or are not regular practitioners," says Dave. “Uttarakhand, Sikkim and recently Meghalaya (high courts) are some unfortunate examples."

“Some small high courts are prepared to do this as a matter of favour to the well-connected. So, some people get designated from those courts even though they are not practising there," Bhushan says, adding that the issues requires deeper consideration. “I was wondering whether some kind of consultation with seniors in the bar could be introduced."

Jaising’s petition seeks directions from the court to “evolve a scheme of designation of senior advocates which is constitutionally compliant" and that corrects “historical wrongs".

She wants the Supreme Court to order the appointment of a “permanent selection committee with a secretariat headed by a lay person" including the attorney general, representatives from the SCBA and the advocates-on-record association, as well as academics.

Candidates should be selected on the basis of an assessment report with 100 metrics, as well as proactively identify lawyers in practice areas that are traditionally under-represented.

Finally, she would like the Supreme Court to designate as seniors all those who have applied this year and had the backing of at least five judges, or whose applications had been deferred for several years.

“I believe the bench, the bar presidents and the AGs (attorneys general) must be involved together in the process," agrees Bhushan. “Most of all, there must be also scope to invite really deserving eminent lawyers by the bench for designation and this can be initiated by bar leader or the AG."

Chandhiok adds: “There should be uniform guidelines to be followed for conferring the designation. The court before which an advocate mainly practises must consider his/her case for designation. A specialist (for example taxation, excise) must be assessed by a judge or judges who had sat on that particular bench and seen the advocate presenting the case. Then, the other brother judges could see the assessment and take a decision."

“Unless there is something seriously against him, the designation should come through. There is no need of any system of reference. A transparent and open procedure could be adopted. A condition of having served the Legal Services Authority or such other body for a particular period should also be there. Once a proper checklist is formed, that would lead to a transparent evaluation and decision, even the eligibility criteria itself could make one decide whether he is fit for the silk (the senior’s gown) or not."

“You can’t take a few bad examples and condemn the whole thing," cautions Datar. “There are a number of good appointments. If you want to support the institution and want to preserve its high standards, then you have to be ruthlessly selective in appointing senior counsel."

Constitutionally, the issue of senior counsel designations arguably pales in comparison to who will adjudicate the laws of the country, and the government will therefore not have any major incentive in legislating reform or take the interest that it has in setting up the National Judicial Appointments Commission.

However, a functioning and meritocratic bar is arguably just as important to the effective administration of justice and is not facing any serious opposition from the bar. And despite the bench’s traditional reluctance in interfering in the affairs of the bar, making the senior process fairer should be an easy decision for the Supreme Court to make and a win-win for both.