Plain Facts | The world of slums

Depending on the data source chosen, India either has the lowest slum population among its peers, or among the highest

India either has the lowest slum population among its peers, or among the highest, depending on which data source you want to believe. The slum census of 2011 pegs India’s slum population at 18% of its urban population.

The UN, however, puts this number at a much higher 29%. The latest survey on urban slums in 2012 by the National Sample Survey Office (NSSO), which released its report a few weeks ago, puts the slum population at 10.5% of urban India. The differences in these figures could partly be because of methodological differences. The slum census of 2011 was not so much a census as a large-scale survey, and it only included bigger slums in some of the bigger urban centres in the country. The slum census was widely criticized for leaving out smaller slums and small towns from its ambit. NSSO’s urban slum survey is methodologically superior on paper as it addresses some of the limitations of the 2011 census but the fact that its estimate of the slum population is so much lower than the census figure, considered to be an under-estimate, suggests that it too suers from sampling bias.

However, both the NSSO and the slum census report can be used at least to gauge how the older slum dwellers in India fare compared with their urban peers when it comes to civic amenities. The NSSO report provides detailed data on 12 states for which adequate samples were available. 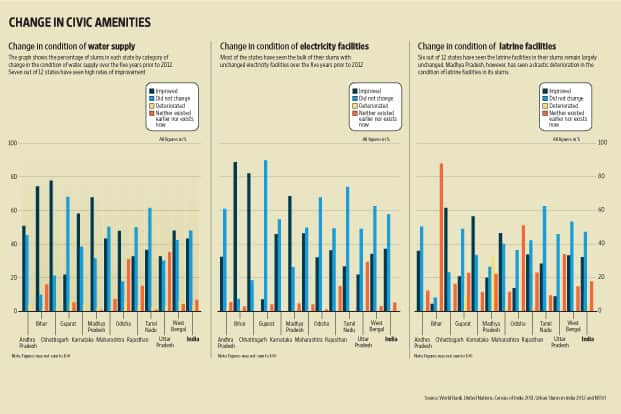 Except in the case of access to tap water, slum dwellers are worse o than their urban counterparts in other civic amenities. But the superior access to tap water reported in the data can be misleading since most taps in slums are communal, and the water supply to slums is typically erratic.

Interestingly, there seems to be a connection between the level of urbanization and per capita income in a state and the level of civic amenities available in that state’s slums. The more urbanized a state and richer its residents, the higher the access its slums have to tap water and toilets, cases in point being Gujarat and Maharashtra. But slums themselves are not necessarily a direct outcome of increased economic activity or urbanization, the data suggests. Among India’s developing peers, highly urbanized countries such as Brazil have among the lowest slum populations as a proportion of their urban populations. Less urbanized nations such as Bangladesh have among the highest proportion of people living in slums.

Possibly, the growth of slums is a manifestation of urban mis-governance rather than urbanization per se. As an earlier Mint analysis showed, high rural-urban income inequality could be a big driver of urban migration which, in the absence of well-designed urban and housing policies, could lead to slums.

Subscribe to Mint Newsletters
* Enter a valid email
* Thank you for subscribing to our newsletter.
Topics
plain-facts
First article
Close
Recommended For You
Feedback
Select your Category
Your Message
No Network
Server Issue
Internet Not Available