What China’s slowdown means for India

Chinese economy expands 7.4%, slowest pace in 24 years; problems may last for some time

New Delhi: The Chinese economy expanded at its slowest pace in 24 years at 7.4% in 2014, signalling an end to its scorching pace of growth for over three decades, which could have significant implications on its local politics, global growth—and India’s immediate economic future.

The numbers, along with estimates by both World Bank and the International Monetary Fund (IMF) that the Indian economy will soon outpace the Chinese one, could see a continuation of the bull run in the Indian stock markets (the BSE Sensex has risen almost 38% in the past 12 months), and also provide a fillip to India’s efforts to revitalize its manufacturing sector.

China’s problems could last for some time.

Nobel Prize-winning economist Paul Krugman said at the Asian Financial Forum in Hong Kong that he would not be surprised if China goes into a nasty recession. “With the Chinese economy in transition, investments are going to fall. But it will take time for consumption to catch up. China is scary because of the magnitude of adjustment it is seeing to move from an investment- to consumption-led economy. China also has a demographic crisis with its one-child policy. The effective working age population growth is slowing," he warned.

And India’s faster growth (albeit on a lower base; the Chinese economy is around four times the size of India’s) could change regional equations.

“President Barack Obama’s (upcoming) visit is an indicator of India’s stock rising. India’s growth rate will impact on the regional power structure, it will be invited into more multilateral institutions like APEC (Asia-Pacific Economic Cooperation). Increasing acceptance of India is unlikely to lead to open conflict between India and China but it can lead to greater shadow boxing between the two countries," said Srikanth Kondapalli, professor in Chinese Studies at the Jawaharlal Nehru University. “Slower growth in China will also have important regional effects, which partly explains the downward revisions to growth in much of emerging Asia," IMF said in its World Economic Outlook Update on Tuesday.

“Although a low-probability scenario, China’s carefully managed slowdown could turn into a disorderly unwinding of financial sector vulnerabilities. Should growth slow abruptly, or credit conditions tighten sharply, a self-reinforcing cycle of weakening growth and deteriorating credit quality could ensue. It could also include a sharp correction in the real estate market, which currently accounts for a sizable proportion of local government revenues," World Bank said in a report released last week.

To counter the slowdown, China adopted measures aimed at containing financial vulnerabilities and unwinding excess capacity including in construction, shipping, and renewable energy sectors and, at the same time, stemming a slowdown. Actions to rein in credit growth have slowed the real estate market and investment while dampening growth, especially in early 2014.

To reach its growth target, the government subsequently implemented a series of targeted stimulus measures. These included support for new public infrastructure and housing projects, tax relief to small- and medium-sized enterprises, and targeted cuts in the banks’ required reserves.

In addition, benchmark deposit and lending rates were cut in November 2014 for the first time since 2012.

Some of these measures seem to have worked. In the fourth quarter of 2014, China’s economy expanded by 7.3%, marginally ahead of median analyst estimates.

Still, because the country has balanced the competing goals of reducing vulnerabilities with supporting growth, the medium-term growth outlook has been revised down. “For 2015, soft oil prices are expected to boost activity and reduce the need for additional policy stimulus. Growth is expected to slow below 7% by 2017 from 7.4% in 2014, broadly in line with the objectives of the current five-year plan," World Bank added.

IMF said that in China, structural reforms, a gradual withdrawal of fiscal stimulus, and continued prudential measures to slow non-bank credit expansion will result in slowing growth. A slowdown in China would dampen activity in the entire region, because of the size of the Chinese market and the close trade and investment links. Since it would likely be associated with commodity price declines, commodity exporters (Indonesia and Mongolia) would suffer a double blow.

China is a major importer of industrial commodities: it consumes almost one-quarter of global energy output and one-half of global metal supply. Just as China’s burgeoning investments in commodity-intensive manufacturing, construction, and real estate raised global demand for commodities, its slowing has depressed demand, especially for copper, iron ore, steel, and nickel. Prices of these metals have recently been 33% off their record highs of 2011, according to World Bank. 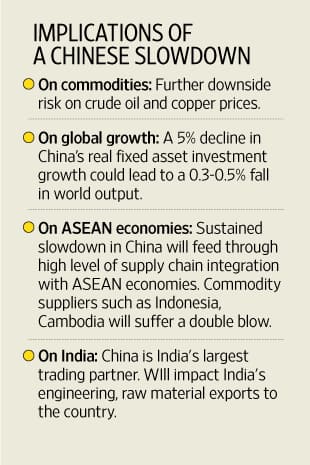 A sustained slowdown in China may feed through in the East Asian countries via integrated supply chains. World Bank estimates suggest that a 5% decline in China’s real fixed asset investment growth would adversely affect demand for metals, and hence weaken activity in trading partners in Latin America and Africa by some 0.3–0.6%. World output could also fall by 0.3–0.5% relative to the baseline.

The lower commodity prices could work to India’s advantage as it seeks to revive its own manufacturing sector and attract foreign companies to ‘make in India’. China’s consumption boom in the 2000s attracted several multinationals to manufacture in that country for the domestic market. India could tread the same path if the Narendra Modi-led National Democratic Alliance government succeeds in its efforts to make it easier to do business in India.

Indian stock markets could benefit too. Chinese indices have run up in recent months—although they corrected sharply earlier this week after restrictions on margin trading; they recovered again after the better-than-expected gross domestic product (GDP) number—and outstripped those in other emerging markets, including India.

Indian stocks, as a result, are reasonably valued despite their strong run, and could find it easier to attract foreign institutional investor (FII) money. China currently has sufficient policy buffers to intervene at times of stress. At less than 60% of GDP, public debt levels provide fiscal space to employ stimulus in the event of a slowdown. It also provides some room to bail out banks if non-performing loans were to rise sharply. Sovereign debt is currently predominantly domestically held, by a small group of institutions.

Regulations restrict savings instruments outside the banking system and the financial system is still predominantly state-owned. Capital controls on portfolio investment and bank lending can prevent sharp capital outflows. Institutional buffers can also retain savings within the country in the event of a loss of confidence in the financial system. Spikes in demand for foreign currency could be met by ample central bank reserves, which amount to $4 trillion.

Elizabeth J. Perry, director of the Harvard-Yenching Institute, in a recent interview with Mint said a big worry is that if the economy slows, there is going to be more opportunity for networking of grievances and the constellation of different kinds of concerns that until now the government has been quite successful in keeping separate.

Elizabeth Roche, Remya Nair and Bloomberg contributed to this story.