The cuts in excise duties and increase in import tariffs show the positive intent of the government, but lack substance

New Delhi: In an effort that some executives and analysts described as too little or too late, the Congress-led United Progressive Alliance government’s last budget, an interim one, announced measures to support manufacturing and the consumer economy to revive demand and stimulate production to boost economic growth from a mere 4.9% this year.

Presenting the interim budget—elections are due by May and the new government will present its budget for 2014-15 after that—finance minister P. Chidambaram announced temporary cuts in excise duties and an increase in import tariffs, intended to revive domestic manufacturing across automobiles and auto parts, mobile phone handsets, capital goods, laptops, refrigerators, televisions and air conditioners.

The share in gross domestic product of manufacturing, mining and quarrying, electricity, gas and water supply, and construction, has been falling. 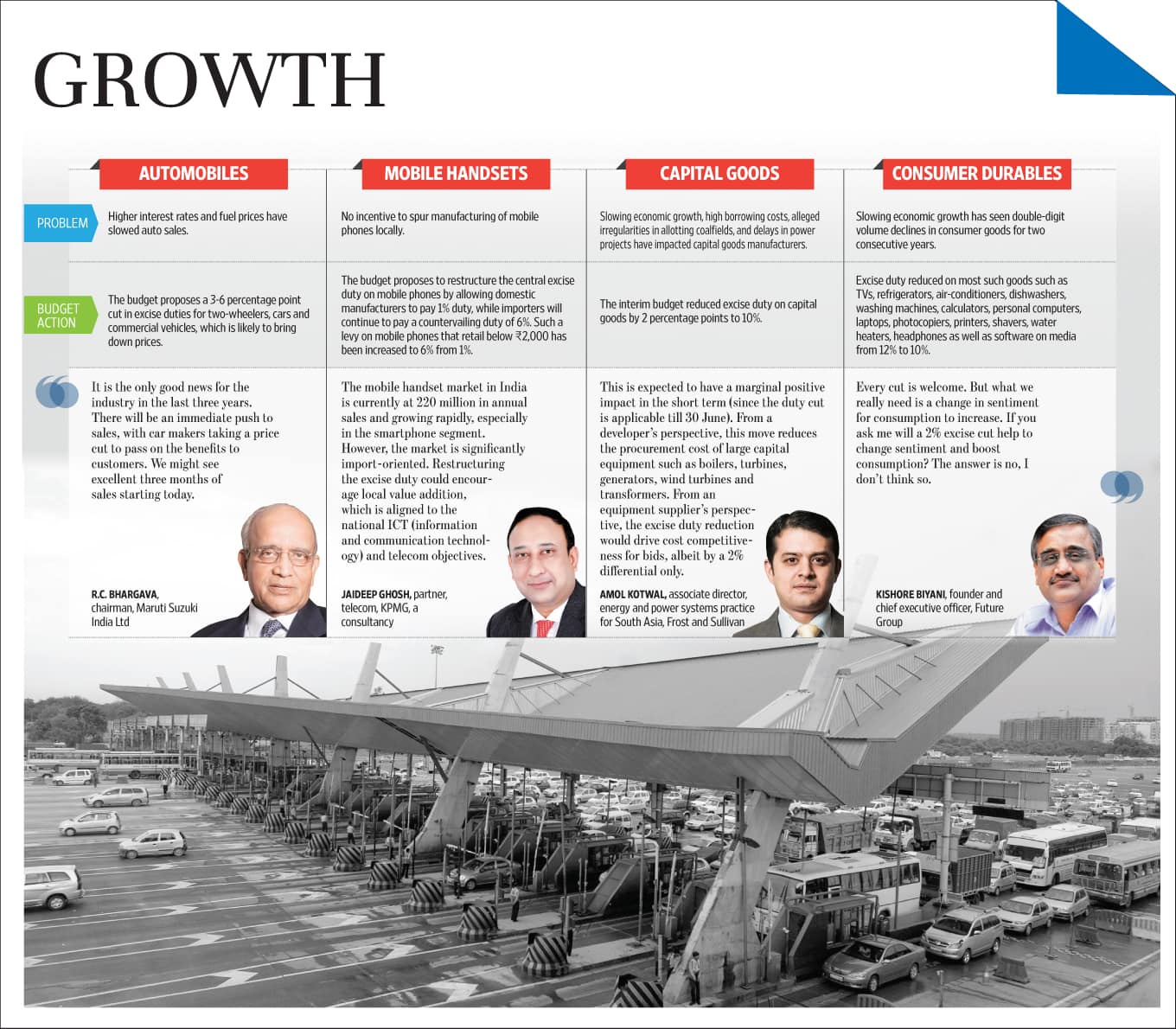 Experts said the duty cuts should help in making consumer durables and automobiles more affordable even if they don’t boost sales. They added that while the announcements showed the positive intent of the government, they lack substance and leave it to the next government to decide whether to keep them intact.

“To give relief to the automobile industry, which is registering unprecedented negative growth, the excise duty is reduced for the period up to 30 June," Chidambaram said in his speech in Parliament.

This move is likely to increase sales in the near term, said R.C. Bhargava, chairman of Maruti Suzuki India Ltd.

“It is the only good news for the industry in the last three years. There will be an immediate push to sales, with car makers announcing a price cut to pass on the benefits to the customers. We might see three excellent months of sales starting today (Monday). People will look to take advantage of price and advance their purchase decisions before the prices go up again," he added.

Sales of passenger cars in India will see its first annual decline over a decade this fiscal year. During the first 10 months to January, car sales fell 5.22% to 1.45 million units over the year-ago period.

Auto makers could announce a price cut in the range of ₹ 1,500 to ₹ 80,000 depending on the vehicle type and duty structure applicable, according to Surjit Arora, research analyst (institutional equities) at Prabhudas Lilladher Pvt. Ltd. He expects this to stimulate demand, especially if there is no rollback in the excise duty in the final budget, which is likely to be presented in June-July, post the Lok Sabha elections.

Still, the head of a large retail conglomerate said that while duty cuts were good, nothing would work as well to increase demand as a boost to consumer confidence.

“Every cut is welcome, but what we really need is a change in the sentiment for consumption to increase," said Kishore Biyani, founder and chief executive officer of Future Group. “Will a 2% excise cut help to change sentiment and boost consumption? The answer is no, I don’t think so."

Nor are there any substantive measures to boost investment, said another executive.

“Virtually nothing has been done to alleviate the sufferings of either the infrastructure or manufacturing sectors," said Ravi Uppal, managing director and group chief executive officer of Jindal Steel and Power Ltd, who described the vote on account as a “lot of good intentions", but with the “substantive content missing".