New Delhi: On 9 September, Delhi was inundated with 91mm of rainfall by noon—almost three-quarters of what it gets normally in all of September. Predictably, most areas of India’s national capital were flooded because the water had nowhere to go as the outlets were choked by layers of tar and debris. Chaotic urbanization and rampant construction have led to encroachment on natural drainage channels and the swallowing up of urban lakes. 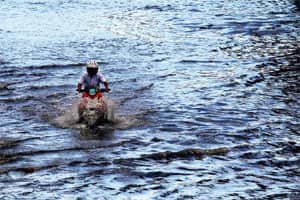 “While the city’s master plan has storm water drains, they have not been upgraded over the years taking into account the growing population," said Sushmita Sengupta, deputy coordinator of the water programme unit of the Centre for Science and Environment or CSE, an environmental NGO. “The water should ideally drain into the holes which have now been covered, increasing flooding through the city."

The last plan for master drainage was drafted in 1976, but was never updated to correspond with the sweeping changes that have taken place since then.

In an attempt to restore and maintain the water bodies of the city, a proposal was mooted at a meeting chaired by Delhi chief secretary Rakesh Mehta in May to form a Delhi water bodies authority that would carry out desperately needed restoration and upkeep.

Lakes and wetlands in Delhi come under a multiplicity of land-owning agencies—the Delhi Development Authority, the Delhi Jal Board (DJB), the Municipal Corporation of Delhi (MCD) and the Public Works Department (PWD). A team of inter-disciplinary experts has surveyed various areas of Delhi to gauge the status of its lakes.

The authority is due to be set up under the department of environment and will be monitored by its parks and gardens society, a nodal agency.

“We might follow a public private partnership like the Lake Development Authority (LDA) in Bangalore," said S.D. Singh, chief executive officer of the society. “The government will continue to provide inputs and monitor the revival projects. Since the water in these lakes is decreasing, it continues to threaten the ecology of the city."

In the ridge area, water bodies will be maintained by the forest department, Singh said. “Geographic Information System (GIS) will be used to mark each water body, so that their boundaries can be defined and areas used as greens."

The proposal is the outcome of a public interest petition filed in the Delhi high court in 2000 by Tapas, a non-profit organization, for saving waterbodies in the city that are important for groundwater recharge but are under constant threat from encroachment and pollution.

The urban impact of the lack of water bodies remains unquantified by the government. Environmentalists like Sengupta hold that the lack of laws and government attention has led to insufficient drainage and increasing pressure on infrastructure.

“Water bodies are recharge points for a city and thus reviving them will lead to recharging the groundwater level," Sengupta said. “The various authorities continue to pass the buck, stating jurisdiction and control and the lakes continue to languish." Eventually, they simply disappear, even in the official records.

The fate of the Mayapuri lake exemplifies this. The PWD had asked the MCD to remove all encroachments on the lake in 2009 to no avail. Eventually, a court order decreed the lake no longer exists.

Another example is the 7,40,000 sq. m Jahangirpuri marshland, allotted to DJB about 20 years ago. With changes in land use policy, DJB in time sold off some of the land to PWD and Delhi Police. The revenue department’s records show that, according to the government, the marshland was never a waterbody—it had been defined as “land not fit for cultivation," Sengupta said.

The functions of the proposed Delhi water bodies authority will be similar to that of the LDA that was set up in Bangalore in 2002. The Lake Development Authority is an autonomous regulatory and policy body for the protection, conservation, and regeneration of lakes.

In Bangalore, LDA has been effective in identifying 246 lakes and fencing them off to tackle the problem of encroachment by land sharks besides setting up catchments areas as treatment plants for sewage that has been allowed to drain into the lakes.

The action is desperately needed in a city grappling with a rapacious land mafia, the indiscriminate disposal of sewage and the lack of legal action against such activity.

LDA has not achieved much apart from privatizing the lakes, said T.V. Ramachandra of the Centre for Ecological Sciences at the Indian Institute of Science in Bangalore.

“Sewage is still allowed to drain into the lakes from industrial areas which has resulted in high impurities in the water and so it can no more be used for commercial purposes," he said. “Since Greater Bangalore has merged with Bangalore, all the common land has been taken over by the land mafia, including the storm water lakes that interconnect the water bodies. This results in flooding and a lack of water in the lakes."

Ramachandra is critical of the government for not accepting the V. Balasubramaniam committee report, which states that the biggest problem with the city’s lakes was encroachment and sewage. The report also wants Karnataka’s Land Grabbing (Prohibition) Act to be passed.

“Had the government taken his report into consideration, the BBMP (Bruhat Bengaluru Mahanagara Palike) would have been successful in ending encroachment but no legal action was taken and the water bodies are still languishing," he said.