New Delhi: The Election Commission on Monday set an October date for elections to the assemblies of three Congress-ruled states, Maharashtra, Haryana and Arunachal Pradesh, in the first electoral test of the United Progressive Alliance (UPA) after its surprisingly easy victory in the 15th Lok Sabha polls.

The assembly elections will be held against the backdrop of fresh economic challenges to the Congress-led UPA amid the spectre of drought in large swathes of the country following deficient monsoon rainfall.

The assembly elections to 288 constituencies in Maharashtra, 90 in Haryana and 60 in Arunachal Pradesh will be held on 13 October. The counting will take place on 22 October, chief election commissioner Navin Chawla said.

Although an opposition in disarray should work to the advantage of the Congress and its allies, senior party leaders admitted it would not be “smooth sailing". Prime Minister Manmohan Singh and his government have been under attack for failing to contain spiralling food prices and handling of foreign policy issues. But analysts point out that state elections do not necessarily reflect the performance of the Central government.

“State elections are slightly different from general elections. Having said that, the UPA government does not have much to show for its first 100 days in power, except promises. Whatever little it has achieved will get neutralized by the phenomenal price rise and hence the Congress is unlikely to get dividends of its Lok Sabha victory," said Subrata Mukherjee, professor in the department of political science, Delhi University.

In Maharashtra, the Congress is yet to finalize its electoral alliance with ally Nationalist Congress Party, or NCP, with which it is in power in the state. There has also been tension in the coalition after the Congress general secretary in charge of the state, Digvijay Singh, suggested that the NCP, a breakaway group from the Congress, merge with the parent party. NCP chief Sharad Pawar has, however, dismissed the idea.

Meanwhile, the Bharatiya Janata Party (BJP) and Shiv Sena, which were in power from 1995-1999, have announced an electoral alliance.

However, with the BJP’s central leadership busy tackling internal strife and a diminished Shiv Sena leadership, the opposition is seemingly weakened. But the BJP is optimistic. 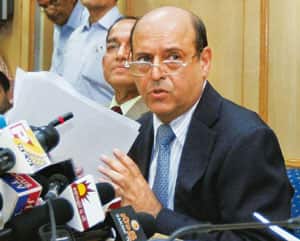 The recent parting of the BJP and Indian National Lok Dal in Haryana, combined with chief minister Bhupinder Singh Hooda’s perceived popularity, is likely to give a boost to the Congress. However, the Bahujan Samaj Party, especially after it joined forces with former Congress chief minister Bhajan Lal’s Haryana Janhit Congress, may play a spoiler for the Congress.

In Arunachal Pradesh, the Congress is hoping to cash in on recent defections from the BJP, with former BJP member of Parliament and the most popular face of the party in the state, Kiren Rijiju, joining the Congress last week.

Although elections were expected to be announced in Jharkhand, where President’s rule has been in place since January, Chawla said a new state assembly had to be constituted in the state only by March 2010 and the commission has time to conduct elections there.