Bangalore: When Rakesh Shukla started his technical writing outsourcing firm called The Writers Block (TWB), he decided to go after a somewhat unexpected source of labour to staff his company: the unemployed.

To be more specific, he looked for women who had taken some time off to raise a child, but were looking to get back into the workforce. “A lot of times they have had some kind of experience and been relatively successful," he says. “They have quality, but have taken a break and want to do something different." 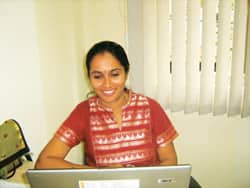 Loving it: Prema Radhakrishnan, a technical writer at The Writers Block, says flexi-timings were what attracted her to her job, but it’s the challenges that keep her there.

“I think it’s an idea whose time is about to come," says Ajay Sood, director of job training company KPO Academy, which seeks out women at home to teach its classes. Since the courses are set in advance—four hours every Monday afternoon for 10 weeks, for example—and don’t require a full-time commitment, Sood says, the job profile is ideal for women who have some outsourcing industry experience, but need more time at home. “There’s always a shortage of talent," he says. “At any given time, you have a pool of women professionals who have taken a break for family reasons. Somebody can put two and two together and make a business solution out of it," Sood adds.

Especially for smaller companies, and positions that can promise more flexibility and stability, women at home are seen as ideal candidates. TWB, for example, which also offers courses in technical writing, runs newspaper ads and online contests specifically targeting the stay-at-home demographic. More than half of the people the company trains are women getting back into the workforce, according to Shukla. Around half of the company’s own staff, who are often pulled from its courses, also fall into that group.

While companies have traditionally taken back their own employees after maternity leave, switching companies or even industries might have a few side benefits. Instead of returning at a level five years below their peers, they can sidestep that ladder entirely, adds Shukla.

Recruiting women may be a deliberate move on the part of the companies to tap into new labour pools, but the women themselves often follow a more inadvertent path into a second stint. Lakshmi Ramanujam, for example, first signed up for a TWB course offered across the street from her Bangalore home on a whim. “I decided to do the course just to see if I could do it," she says. After finishing the course though, the company offered her a job.

“When I got the offer, I thought it was suitable," she says. “It takes hardly three minutes to reach home."

Larger companies, too, have started pursuing women who are looking to get back into the workforce. In March, the Tata group launched a “second internship" programme for women, and earlier this month PepsiCo India Holdings Pvt. Ltd started posting job openings specifically targeting women.

Many of the companies are tinkering with things such as flexi-timings and work location to keep women on board. Pepsi is trying to figure out what work can be done off-site or part-time, and retooling certain roles and policies to fit that description, according to Nupur Bhargava, Pepsi’s vice-president of staffing. Software firm Stratify Software India Ltd, part of the US-based Iron Mountain group, followed through on its work-from-home capability and even let one woman work from her home in Australia. “They may not be available 24 hours," says Parveen Mittal, who heads the India operations in Stratify, “but they are a tremendous asset."

The ability to step out for a parent-teacher meeting or bring their children to work, say female employees at Stratify, are part of a work culture that keeps them with the company.

But while mothers might first look for flexibility in their second stint, the work itself might keep them there. “I started off with notions of flexible timings, but I’m now enjoying the challenges," says Prema Radhakrishnan, a technical writer at The Writers Block. Even if “leaving by five or six in the evening is totally out of the question".

Tips for going back to work

* Stay in touch with former colleagues

* Stay abreast of news and developments in your field

* Take a short-term course to brush up your domain knowledge. It will also beef up your resume

* Find alternative childcare options, and get your child adjusted to them before beginning work