New Delhi: To address deficits in India’s infrastructure, finance minister Pranab Mukherjee on Friday proposed measures, including extension of grants given by the government to make unprofitable projects viable for private companies to new sectors, increasing the limit on overseas borrowing and reducing withholding tax on foreign investments. 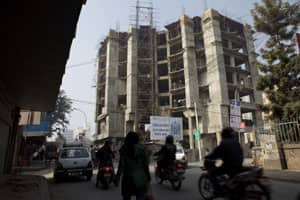 The grant, also known as viability gap funding (VGF), has been extended to irrigation (including dams, channels and embankments), agriculture market infrastructure, fertilizer, oil and gas (including liquified natural gas, or LNG) storage facilities and pipelines, and the telecom sector.

“Lack of adequate infrastructure is a major constraint on our growth," Mukherjee said in his budget speech.

The budget focused on providing respite to the crisis-hit Indian power and civil aviation sector.

Scrapping import levies on coal will help meet the growing demand for the fuel in a country where 70% of electricity is generated from it.

In addition, a concessional countervailing duty of 1% on thermal coal till March 2014 was also announced in the budget, along with customs duty exemption for coal mining projects.

While such exemptions will increase the demand for imported coal and help utilities such as Tata Power Co. Ltd and Reliance Power Ltd that are setting up imported coal-based plants, they will also help state-owned Coal India Ltd’s mining plans. Analysts said reducing the withholding tax to 5% from 20% will boost overseas investment in the sector. This tax is charged on the repatriation of income from equity or debt.

“Abolition of customs duty on coal, coupled with reduction in CVD (countervailing duty) on coal imports, will reduce electricity cost for consumers and is a strong positive," said Gautam Adani, chairman of Adani Group, which is among the largest coal importers in the country.

“The waiver for thermal power companies will be beneficial for upcoming projects. The removal of customs duty on imported coal, natural gas, LNG, and the incentives for the mining sector will marginally improve coal supply, but is still a far cry from achieving adequate fuel security," said Anil Sardana, managing director of Tata Power.

In addition, the budget also proposed extending a tax holiday under section 80-IA of the Income-Tax Act for power projects, which ends on 31 March, by another year.

The law allows a developer to claim tax exemption of up to 10 years within the first 15 years of a project’s operations.

An additional depreciation of 20% in the initial year, which has been extended to newly acquired projects, will help consolidation in the sector. In addition, the budget also announced incentives to promote the use of energy-efficient appliances and light-emitting diodes. These announcements were likely to be made in the budget, Mint reported on 1 March.

Mukherjee allowed airlines to access ECBs for working capital requirements for the year starting 1 April. Such a dispensation, with a ceiling of $1 billion, will help financially stretched airlines such as Kingfisher Airlines Ltd, Jet Airways (India) Ltd, SpiceJet Ltd and Air India Ltd.

However, Ajit Krishnan, tax partner and leader of infrastructure practice for consultancy firm Ernst and Young Pvt. Ltd, said the government had focused more on the power sector, whereas in the other sectors, it did not make too many announcements.

To boost the housing sector, the budget allowed ECBs for low-cost affordable housing projects and set up a credit guarantee trust fund to provide institutional credit for housing loans. It also extended the scheme that subsidized interest on low-cost housing by 1% by another year.

In addition to power and airlines, Mukherjee acknowledged that sectors such as roads, bridges, ports, shipyards, housing, fertilizer and dams were “stressed", and announced a reduction in the withholding tax to 5% from 20% for three years for the same.

In addition, the investment restrictions on venture capital funds will also be removed and full exemption be provided to certain construction equipment such as tunnel boring machines that will aid in road-building.

The budget also allowed overseas borrowing for maintenance and operations of toll systems for roads and highways.

To enable access of cheap finance for infrastructure projects, Mukherjee also announced doubling the money to be raised through tax-free bonds next fiscal to ₹ 60,000 crore. In what will affect the financials of oil explorers such as Oil and Natural Gas Corp. Ltd, Oil India Ltd and Cairn India Ltd, which has been acquired by Vedanta Resources Plc, the cess on crude oil under the Oil Industries Development Act was increased by 80% to ₹ 4,500 per tonne.

“The excise duty structure for most petroleum products has been rationalized, with an ad valorem levy of duty at the rate of 14% on most products, while diesel, light diesel oil, etc., continue to have a specific levy per litre in addition to the ad valorem levy," Saloni Roy, tax partner at Ernst and Young.

To encourage investment in the fertilizer sector, which has not seen any new plant come up since 1995, the budget proposed abolishing the import duty of 5% on equipment used in setting up new fertilizer plants.

India and Iran have finally worked out a way for the former to pay for Iranian crude oil, with the Union budget exempting the payments from a withholding tax.

The budget said that a mechanism has been devised to make payments to foreign companies in India in Indian currency for import of crude oil in the national interest. Such a dispensation will be effective from 1 April, provided the income earned by the foreign firm “is under an agreement or an arrangement which is either entered into by the central government or approved by it", and “the receipt of money is the only activity carried out by the foreign company in India".

Under the new arrangement, New Delhi will pay 45% of the dues in rupees and Tehran will use the money to pay for imports from India, its second biggest customer for crude.

India imports around 400,000 barrels of crude oil per day, or 12-13% of its needs, from Iran, amounting to about $11 billion (around ₹ 55,330 crore) a year. Payments have been a problem after India decided to discontinue making them through the Asian Clearing Union system as Iran came under sanctions over its controversial nuclear programme. Since July, India has been paying for oil it buys from Iran through Turkey, and was exploring the option of making payments through Russia.