Home / Politics / News /  Punjab short of hands
Back
Share Via

Chandigarh: June is the month when Punjab needs all the hands it can get, to transplant rice saplings.

It is barely able to do so even with the help of migrant labourers, coming mostly from Bihar, Jharkhand and Uttar Pradesh, who arrive in April to harvest wheat in this bread basket of India and stay till August, for the rice harvest. 61dadd4c-49ee-11dd-803e-000b5dabf636.flv

This year was worse.

Labour was extremely hard to find as many regular migrants preferred to stay back in their villages and work under the rural employment guarantee programme.

A farm worker would usually charge Rs750 to transplant rice on an acre of land. This year, wages shot up to Rs1,500 per acre due to the labour shortage, causing a crisis on the fields, and then stabilized to around Rs1,200 an acre.

The shortage was so acute that even state agencies woke up and rushed to provide alternatives. The Punjab state farmers commission started demonstrations of automated rice transplanters. Two of these machines, quietly rusting since being imported from Japan a couple of years back, were pressed into service in the heart of rice planting operations, in Ludhiana and Sangrur districts.

The commission also imported three new machines which, being smaller and more convenient, caught the fancy of Punjab’s farmers, who now say these are more affordable and could provide an alternative to the labour crisis. 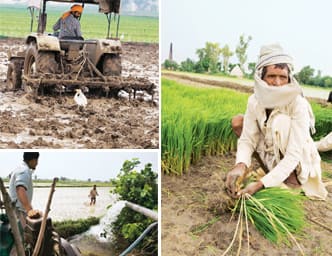 Pitching in: (clockwise from top left) Sunder Singh finds the stork an amusing distraction as he readies his field for transplanting. In the night, he will flood the field with water; Hari Ram, a labourer from Majorganj in Bihar, looks on at the darkening rain clouds as he works in the field; and Supinder Singh and his cousin Tejinder begin work at dawn on the fields he owns in Bhankapur in Mohali district.

Unlike wheat, rice was not traditionally grown in Punjab. It is ubiquitous in south and east India. Punjabis are more fond of rotis made from wheat flour, perhaps because it is more suited to the local climate.

The Green Revolution in the 1960s changed all that, when Punjab started to cultivate rice in large quantities. The state today produces more than 10 million tonnes of rice, most of which the government buys to sell at subsidized rates to the poor. Punjab is a small state, covering a mere 1.7% of India’s land area, but it contributes 37% of the rice to the national pool.

Rice is a difficult crop to cultivate, mainly because saplings have to be first grown in nurseries and then transplanted in fields. It is a labour-intensive crop and needs a lot of water .

This year, rice transplantation was over in Punjab by the end of June. It was done in 25 days on 2.5 million ha, which translates to 100,000ha planted every day. During the transplantation, standing water and young seedlings are a common sight all over the state. Rains are beneficial, but a storm could damage the saplings.

But the sight of little green rice plants sticking out of flooded fields in a non-rice-eating state remains a wonder to behold.