A majority of respondents to a Mint-instaVaani poll is of the view that the recent cabinet expansion by Prime Minister Narendra Modi is a political move with an eye on the forthcoming state elections in Uttar Pradesh, Punjab, Uttarakhand and Goa.

At the same time, over 50% of respondents believe that the expansion and consequent reshuffle of portfolios is required at this point in time, two years into the term of the National Democratic Alliance (NDA) government. 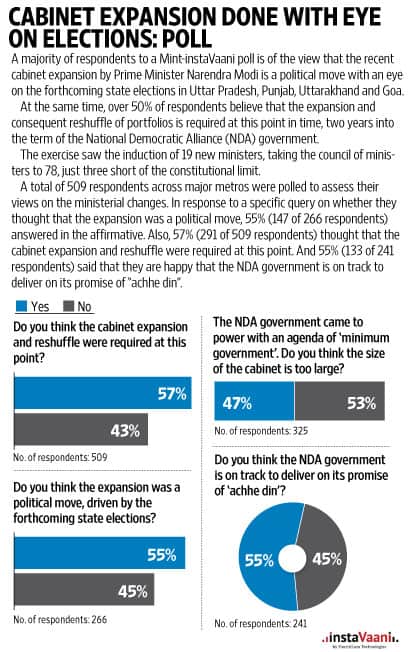 The exercise saw the induction of 19 new ministers, taking the council of ministers to 78, just three short of the constitutional limit.

A total of 509 respondents across major metros were polled to assess their views on the ministerial changes. In response to a specific query on whether they thought that the expansion was a political move, 55% (147 of 266 respondents) answered in the affirmative.

Also, 57% (291 of 509 respondents) thought that the cabinet expansion and reshuffle were required at this point. And 55% (133 of 241 respondents) said that they are happy that the NDA government is on track to deliver on its promise of “achhe din".