New Delhi: Will the move to demonetize existing currency notes of Rs500 and Rs1,000 denomination be the trigger for reforming the funding of elections?

“There is only one political repercussion I want to see with this (demonetization) and that is that politics and the process of elections will also get cleaned because of this. This will have an effect on political parties as well. So far in our country there has been a practice of invisible political funding, that will also have to be visible in a democracy," Union finance minister Arun Jaitley told Doordarshan News in an interview.

Political analysts concur and argue that the move to demonetize could address the creation of black money and consequently the funding of political parties.

The timing of the government action comes coincidentally just ahead of assembly elections to five states including India’s most populous Uttar Pradesh. Ruling Bharatiya Janata Party (BJP) is a key contender in all the upcoming polls including Uttar Pradesh, Uttarakhand and Goa.

“We know that political parties and primarily candidates allegedly use black money in election campaigns. But in just one step the NDA government has made it difficult for the use of black money. This is an electoral reform," said A.K. Verma, a Kanpur-based political analyst and political science professor at Christ Church College. 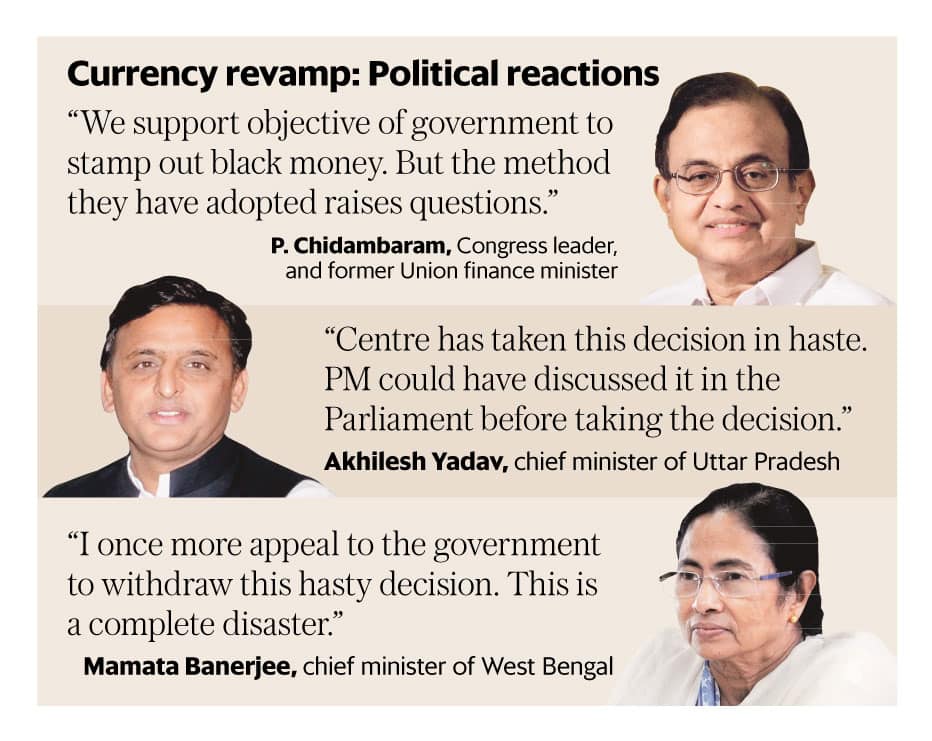 Indian elections, state as well as national, have historically seen the influence of money power.

In fact in the last round of elections to state assemblies in May this year, the Election Commission (EC) had to defer polling in two assembly constituencies of Tamil Nadu less than two days before polling. The reason—huge sums of cash were seized and reports of large scale distribution of money to voters surfaced.

“We too have taken a note of the demonetization announcement. We feel this will help improve the manner in which elections are conducted. In a globalized economy, such measures will curb the use of black money and significantly reduce it in polls too. The EC too has been implementing its checks strongly," a senior EC official said requesting anonymity.

According to a report by the New Delhi-based Association for Democratic Reforms (ADR), during the 16th Lok Sabha elections, the EC had reported seizures of around Rs300 crore of unaccounted cash and more than 17,000 kg of drugs and cache of liquor, arms and other items.

“Apart from funding for terror and use of black money, the government’s decision will directly impact on the note-for-vote phenomena. All political parties are equally to be blamed for this. Some use notes for votes and some do it through goods and services. It is a good initiative by the government and a welcome step towards electoral reforms," said N. Bhaskara Rao, a New Delhi-based political analyst.

Some analysts, however, argue that while welcome the decision on Tuesday may not have an immediate bearing on the upcoming assembly elections as the campaign is already in full swing.