New Delhi: The 13th Finance Commission (TFC) has called for streamlining government expenditure to promote more investment in public assets and services, stressing a reordering of state spending rather than cutbacks.

The panel, in its report tabled in Parliament on Thursday, recommended the reduction and better targeting of subsidies and greater accountability for making public expenditure more productive. 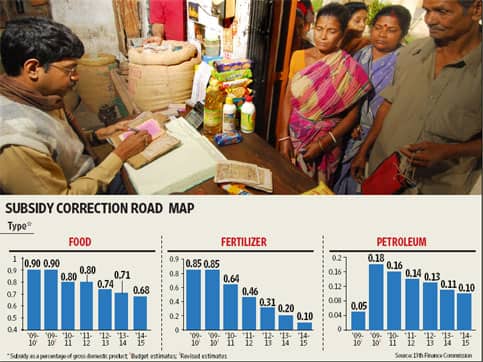 “The reduction of these subsidies, by freeing up fiscal space, will facilitate increase in the supply of public goods such as schools, village roads and irrigation, which will lead to higher growth by inducing greater private investment," the commission said in its report.

The commission, however, is in favour of a 50% subsidy on foodgrains supplied through the public distribution system to below-poverty-line (BPL) families and a 100% subsidy for Antyodaya Anna Yojana (AAY) beneficiaries, considered to be the poorest of the poor.

In a bold move, TFC also recommended that disinvestment proceeds accruing to the National Investment Fund between April 2009 and March 2012 not be solely used for funding social sector programmes but also for creating “critical infrastructure and the natural or environmental capital of the economy."

The government, on its part, said that the recommendations on expenditure reforms will be “examined in due course."

“The commission has tried to provide for fiscal rectitude and a substantial emphasis on funds to local bodies and meet the requirements of the states," B.K. Chaturvedi, a member of the Planning Commission and the Finance Commission, told Mint.

TFC also argued against off-budget financing of government programmes and favoured the implementation of recommendations made by a panel headed by Chaturvedi.

That panel had suggested that monthly revisions in fuel prices be used to bring local prices on par with international ones and the introduction of a windfall profit tax on oil producers.

With the management of ecology, environment and climate change being a major area of its focus, TFC has reassessed the petroleum subsidy, assuming mean crude oil prices at $70 per barrel, or Rs10,760 crore compared with the earlier estimate of Rs23,800 crore.

Similarly, TFC is also in favour of restricting the fertilizer subsidy to 120kg of fertlizer per cultivator household, estimating the subsidy to be Rs10,980 crore.