A million migrations: Journeys in search of jobs

Roughly a 100 million Indians have moved in search of work from their native place. Where do they go and what work do they find?

“There is always work available in Surat," recounts a middle-aged migrant worker, before boarding the Puri-Okha Express, one of the longest train journeys in India—transporting hundreds of thousands of migrant workers from coastal Odisha to Gujarat. Surat has been one of the world’s fastest growing cities of the past four decades, with annual population growth rates exceeding 6%, and over 70% of the city’s workforce today is sourced from outside. Its diamond polishing industry absorbs labour from a few districts of Saurashtra (within the state of Gujarat) as trust is a key component of the business and labour recruitment is mediated through strong caste networks. The other major industry is synthetic textiles which churn out most of the sarees worn by Indian women, amid the deafening clanging of powerlooms in small-scale industrial units.

In order to make the diamonds and synthetic sarees, mostly adorned by women, Surat employs over a million male migrant workers drawn from all over India. There are industry-specific recessions and economic disasters, such as demonetization, that temporarily halts or reverses the waves of migration, but Surat is widely considered to be the El Dorado of migrants. “Nobody leaves Surat poorer than when they first arrive" is a commonly held adage among the migrant workers of Surat. “Most migrants eventually leave Surat" could well be the other.

Migration for work within India is highly circular, with migrants working in multiple destinations during their lifetimes, and retiring in their native places. As per the Economic Survey of India 2016-17, there are over a hundred million migrant workers in India, of which most are circular migrants. The durations can be as short as a day or a week, in which case they are referred to as commuters, numbering in the tens of millions, who frequently board trains and buses bound toward a nearby town or city.

A few more tens of millions migrate seasonally for work—for a few months of the year, drawn disproportionately from the Scheduled Castes and Tribes and from particular clusters in central India (see map). They work in precarious worksites in sectors ranging from construction and brick kilns to rural harvesting operations. These migrations are brokered by contractors, often tied with debt, and studies have documented difficult prospects of upward mobility. A recent study by Divya Ravindranath on maternal health among migrant construction workers in Ahmedabad documented severe malnutrition among women and children. The lack of access to social security benefits and expensive health facilities in a land far away from home led women to neglect their own health and that of their children. This and other issues related to circular migration have prompted ‘portability of social security benefits’ to emerge as a major policy concern. It was also advocated in a first-of-its-kind policy document compiled by the Working Group on Migration, released by the government in 2017.

Beyond commuter and seasonal migrations, there are other kinds of migrations ongoing in contemporary India on a vast scale—for reasons such as marriage, education, job transfers, and involuntary displacements. But longer term circular or semi-permanent migration by migrants, who usually own some land back home, form the bulk of work-related migrations in India.

In a recently published book, India Moving: A History of Migration, I have argued that the great Indian migration wave of semi-permanent, male-dominated, and remittance-based migration is the world’s largest and longest voluntary stream of migration. Most of the dark shaded regions shown in the map are part of it—primarily including the Bhojpuri speaking belt in the Gangetic plains, 60% of the regions along coastal India, the Himalayan region and a few other clusters. These regions have witnessed persistent mass migrations, often for more than a hundred years.

The great migration wave was east-bound in the nineteenth century towards Bengal, Burma, and southeast Asia; west-bound in the twentieth century towards the arc between Punjab and Maharashtra; and appears to be south-bound in the twenty-first century. While earlier, cities like Bombay and Calcutta absorbed many of the migrants, today, there are a greater number of towns and cities that do so. Surat is a classic example of a smaller town turning into a migrant hub. And this shows up in the sex ratio, since all the new residents (migrants) are men. When Surat began to grow exponentially, its sex ratio began to plummet from over 900 females per 1000 males in the 1960s to around 750 today. 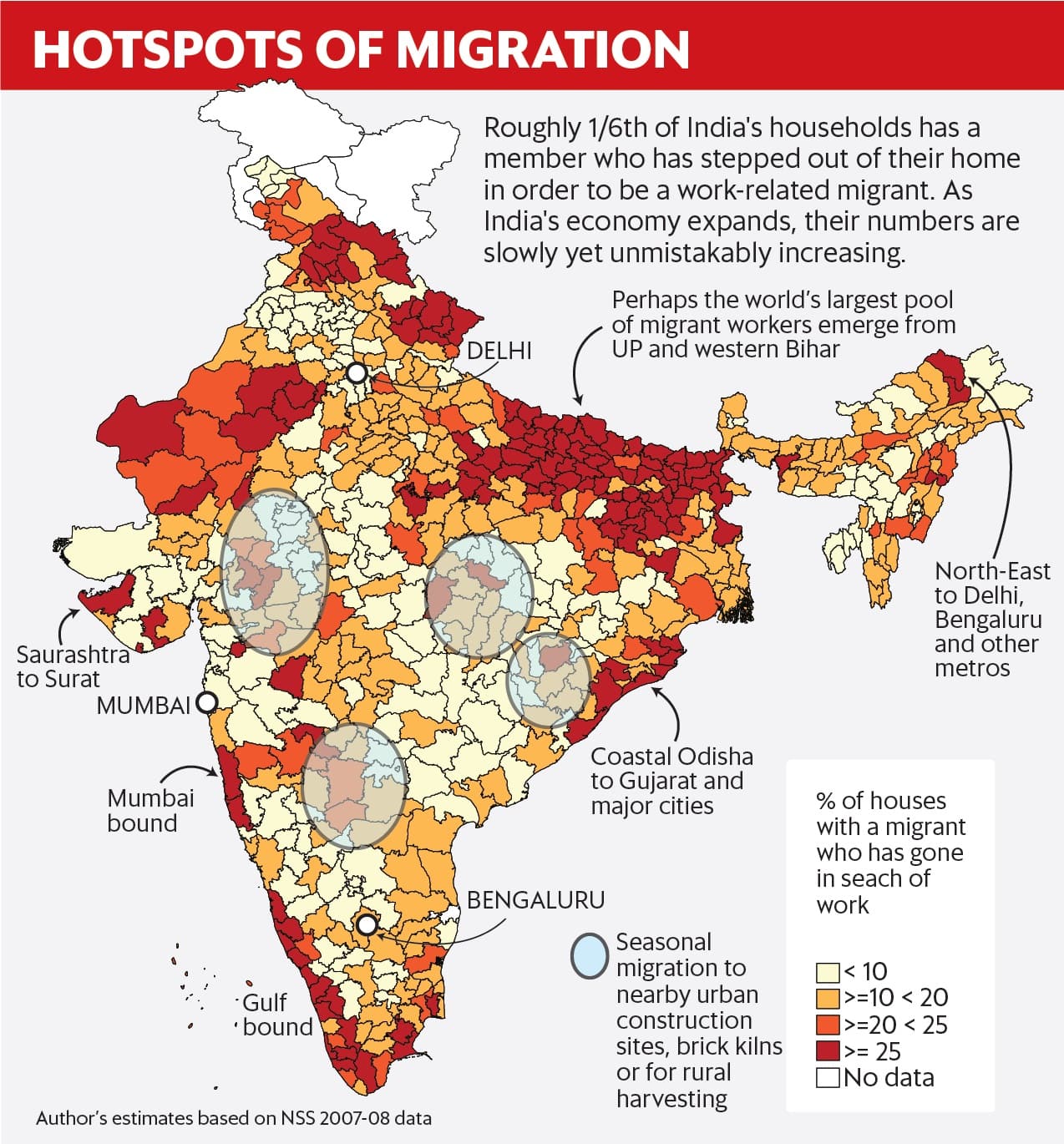 The coastal belt below Mumbai, all the way down south to Kanyakumari, is one of India’s major hotspots of outmigration. Travel south along the exquisite Konkan railway and you will find consistent stories of labour shortage and numerous signs of Western Union, the international money transfer operator. Historically, most migrants were Mumbai-bound along steamer routes, but today, destinations have diversified—especially to the Persian Gulf countries.

In Ratnagiri, the sex ratio has remained over 1,100 females per 1,000 males since the 1870s, representing a curious phenomenon of ‘missing men’, at least within certain districts, for well over a century. While Marathas dominated the earlier waves of outmigration, recent research shows that outmigration has intensified across all major caste groups along the coastal Maharashtra region. Circular migration has been a strategy conditioned by gender norms and has also been used to evade the exorbitant housing costs of Mumbai. The strategy is to have a foot in two places at the same. The women left behind take on more agricultural tasks, though, in Ratnagiri, an uptick in outmigration for work among women too has begun to be documented.

Over the decades, migration has alleviated absolute levels of poverty and given a new voice to the lowest ranking castes, the Mahars, but left relative inequality in landholdings intact. And with the rise in incomes, the famous mango orchards of the region draw in tens of thousands of immigrant workers all the way from Nepal—creating a new cycle.

Further south, in Goa, outmigration has reduced since the highs of the 1960s but in some taluks, emigration to the Gulf or to work in the merchant navy continues to hold a big draw for many. Udupi in coastal Karnataka began its connection with Mumbai through the fast-food restaurant business and has sustained this connection in other ways. As one heads further south to Mangalore and cross the boundary to Kerala, the smell of Arab-style Shawarma is unmistakable. It represents the cultural import from the Persian Gulf as millions of circular migrants straddle their lives across the Arabian Sea in construction work and a plethora of sectors in Dubai and other cities. Like the Nepalese import into Ratnagiri, over two million north Indians now work in Kerala to fill the void in segments of the labour market left vacant by upward mobility. Along the east coast, a similar rush to the Persian Gulf and to a lesser extent, southeast Asia, is witnessed in districts around Sivaganga. In the hinterland, internal migration takes places towards the industrial hubs of Salem and Tiruppur. The relatively rich coastal Andhra belt has strong migrant ties with Hyderabad and a large diaspora in America. And further north in coastal Odisha, the historic ties with Burma have swapped 360 degrees to Gujarat. Coastal India therefore exhibits a stunning diversity of destinations in outmigration driven by a combination of history and necessity.

In hinterland India, the vast Bhojpuri speaking belt of eastern Uttar Pradesh and western Bihar forms arguably the world’s largest pool from where migrant workers emerge. They work in all the leading cities of India; have close connections with the textile and industrial belts around Mumbai, the fields of Punjab, and, off late, have overtaken Kerala in supplying migrants to the Persian Gulf.

Remittances from all these places flow all through the year to thousands of villages and small towns, much like the tributaries of the river Ganga. Migrants from the Himalayan states of Uttarakhand and Himachal Pradesh find primary sustenance in the informal economy of Delhi; those from northern Rajasthan in the industrial clusters.

Migration in the Deccan is smaller in magnitude but even here the great migration wave seems to be active in northern Karnataka; districts like Sangli in Maharashtra; and Durg in Chhattisgarh. And as places of destination, Pune, Bengaluru and Hyderabad form the triad of booming cities in the hinterland as new opportunities open up every day. These cities, especially Bengaluru, increasingly draw in migrants from the North-East in specialised sectors, where proficiency in English is highly valued. While the IT sector and public administration have been the major drivers of metropolitan city activities, the vast informal economy associated with it—from plumbers to cooks to mobile phone service workers—has absorbed the lower rungs of the migrant workforce. One sector in particular needs to be singled out, that of security guards, for fulfilling the dreams of millions to have a foothold in the city. The security industry has grown by leaps and bounds as gated campuses and townships have placed an inordinate focus on surveillance measures to ensure ‘safety’ in their precincts.

Of all the linguistic and regional communities of India, it is the migration of Bengalis that merits the closest attention. Historically, they were not a part of the migration wave. On the contrary, Bengal was a major recipient of migrants since the late nineteenth century.

Bhojpuri folksongs used to decry the seductive Bengali woman stealing the attention of Bihari migrant men who were working away from home. Over the past two decades, however, with the relative stagnation in the economy of Kolkata, Bengalis have crisscrossed the length and breadth of the country to find new destinations. And it is not just economics departments that have absorbed their valuable skills. Artisanal work in the gold sector draws in hundreds of thousands of migrants from southern West Bengal to cities ranging from Surat to Kochi and even remote rural locations. This specialized migrant network in one sector is the latest addition to the great Indian migration wave, which, in the past, had spawned the rise of the jute and cotton textile industries in Calcutta and Bombay, respectively. But Bengali labour migration is slightly different because there are several migration streams and a greater diversification in occupations, ranging from construction to cultivation, and in regions as diverse as Gujarat and Kerala.

While Bengali contribution to south Indian films earlier came through leading female actors who became prominent in the Telugu film industry, it has now even breached the Malayalam frontier through songs on migration. In a recent Malayalam film, Njan Prakashan, a character laments that with Gulf-bound international emigration, the Keralites have lost the art of farming and their songs. The Malayali film then breaks into a full-length Bengali song—Badi Badi Bar—showing scenes of rice cultivation with Bengali labour in Kerala. In contemporary India, it seems it is the Bengalis turn to sing.

The great Indian migration wave, which is semi-permanent, male-dominated, and remittance-based, is the world’s largest and longest voluntary stream of migration. There are over a 100 million migrant workers in India.

The country has witnessed migration to centres such as Surat, considered as the El Dorado of migrants, to Kolkata and Mumbai, which have seen influx from eastern pockets, and the outflux to the Persian Gulf.

Among the many issues surrounding migration and migrants, skewed sex ratios in many pockets of India, like Surat in Gujarat and Ratnagiri in Maharashtra, are a cause for concern.

Chinmay Tumbe is an economics faculty member at IIM-Ahmedabad and the author of India Moving: A History of Migration (Penguin, 2018)