New Delhi: Production of horticulture crops such as fruits and vegetables touched a record high of 295 million tonnes (mt) in 2016-17, according to the second advance estimates released by the agriculture ministry on Tuesday.

The latest estimates are an upward revision over the 287 mt estimated by the ministry in February (first advance estimate), and 3.1% more than the 286 mt produced in 2015-16.

The record horticulture production in 2016-17 marks the fifth straight year that production of fruits and vegetables outstripped output of foodgrain. Data from the farm ministry further shows the area under horticulture crops rose 1.9%, from 24.5 million hectares (ha) in 2015-16 to 24.9 million ha in 2016-17. 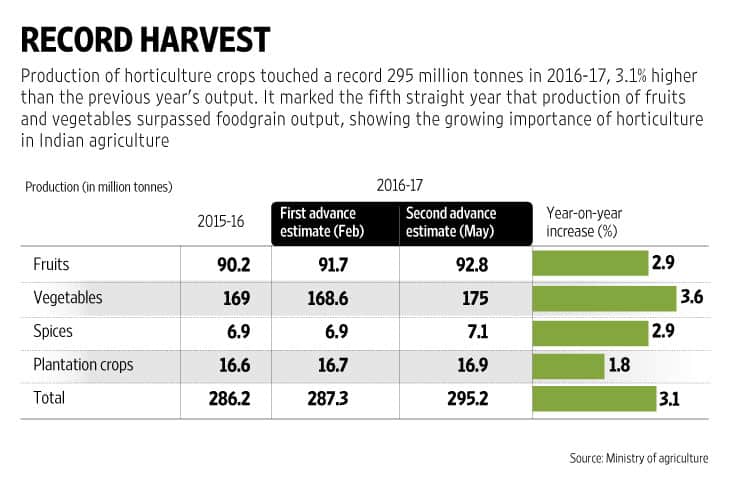 Among major vegetables, production of potatoes, tomatoes and onions rose during the year, the data shows.

The record production of horticulture crops in 2016-17 was also accompanied by a steep fall in wholesale prices of major perishables such as onions, potatoes and tomatoes.

In states like Chattisgarh, farmers were forced to dump their tomatoes by the roadside while potato and onion prices dipped to lows ranging between Rs1-3 per kg in several states like Uttar Pradesh, Punjab and Maharashtra.

Over the past few years, Indian farmers have adopted horticulture crops, which ensure a quicker cash flow and can be grown in very small plots, unlike say, pulses, which may take more than six months from sowing to marketing.

State-wise data on production (for 2015-16) shows the horticulture boom is spread across the country, and not limited to the erstwhile foodgrain-based green revolution states like Punjab, Haryana and western Uttar Pradesh.

States like Tamil Nadu, Telangana, Maharashtra, Madhya Pradesh, Karnataka, Gujarat, Bihar and Andhra Pradesh are among the leading fruit growers in the country.