New Delhi: China’s economy grew at its slowest pace in a quarter of a century last year, raising expectations of a further devaluation of the yuan to boost its exports—a move that may erode India’s export competitiveness and fuel currency-market volatility.

Separately, the International Monetary Fund (IMF) on Tuesday kept its growth forecast for India unchanged at 7.5% in 2016-17 and lowered its global growth projection in an update to the World Economic Outlook (WEO) released in October, maintaining that China remains a source of uncertainty.

China grew 6.9% in 2015 after fourth-quarter expansion slowed to 6.8%, capping a tumultuous year in which the world’s second-largest economy was hit by capital outflows and a summer stocks crash. 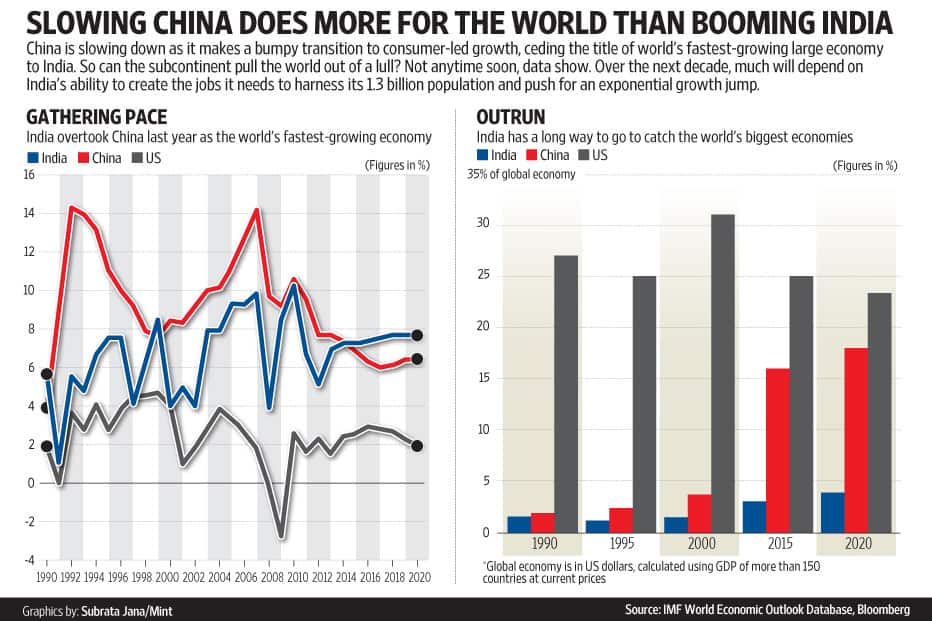 For long a driver of global growth, the rapid slowing of the Chinese economy is triggering fears of a fresh global setback.

IMF kept China’s growth projection unchanged at 6.3% in 2016, but lowered its global growth forecast to 3.4% from the October projection of 3.6% for the same year.

India is projected to remain the fastest growing major economy for the second year in a row. To be sure, the Chinese economy, at $10.4 trillion, is little over five times the size of the Indian economy, estimated at $1.9 trillion in 2014-15.

“India and the rest of emerging Asia are generally projected to continue growing at a robust pace, although with some countries facing strong headwinds from China’s economic rebalancing and global manufacturing weakness," IMF said.

Maury Obstfeld, economic counsellor at IMF, said in a video posted on the Fund’s website that the slowing of growth in China was to be expected, as the economy was experiencing a process of rebalancing which entails stepping up consumption in the economy.

“There is, however, uncertainty about the bumpiness of that ride. The markets are quite focused on what is going on because the spillovers from China to the rest of the world are quite significant, both through their demands for imports and on the effect on commodity prices. That contributes to the volatility," he added.

India’s exports contracted for the 13th time in a row in December, due to tepid global demand and a volatile global currency market. Niti Aayog deputy chairman Arvind Panagariya, in an interview with Reuters on Tuesday, said India would be “very concerned" if China were to allow a major devaluation of the yuan.

“In the end, that not only makes Indian goods less competitive in the Chinese market, but also India’s ability to compete with the Chinese in third markets is impacted," he said.

Snapping its three-day losing streak against the dollar, the rupee recovered by three paise to close at 67.65 on fresh selling of dollars by banks and exporters amid a recovery in equities. BSE’s benchmark Sensex rose 1.2% to 24,479.84 points.

Madan Sabnavis, chief economist at credit rater Care Ratings, said any further devaluation of the Chinese currency will add to volatility in the rupee.

“The Reserve Bank of India has to take a call of allowing the rupee to temporarily depreciate by another 7-8%," he added.

“Deepening local capital markets, improving fiscal revenue mobilization, and diversifying exports away from commodities are also ongoing challenges in many of these economies," it said.

IMF said in terms of the country composition, the downward revision in global growth was largely accounted for by Brazil, where a recession is proving to be deeper and more protracted than previously expected; the Middle East, where prospects have been hurt by lower oil prices; and the US, where the growth momentum is now expected to hold steady rather than accelerate.

IMF is not as optimistic about a pickup in US growth as it was in October, Obstfeld said.

“US growth is facing challenges due to the dollar strength, which is causing its manufacturing sector to shrink marginally and is having an effect on its trade balance," he added.

Although a decline in oil prices, driven by higher oil supply, should support global demand, several factors have dampened the positive impact of lower oil prices.

“Financial strains in many oil exporters reduce their ability to smooth the shock, entailing a sizable reduction in their domestic demand," IMF said. “The pickup in consumption in oil importers has so far been somewhat weaker than evidence from past episodes of oil price declines would have suggested, possibly reflecting continued deleveraging in some of these economies. Limited pass-through of price declines to consumers may also have been a factor in several emerging market and developing economies."

IMF warned that downside risks such as a sharper-than-expected slowdown in China’s growth, tighter global financial conditions as the US exits from an easy monetary policy, a sudden rise in global risk aversion and an escalation of current geo-political tensions could derail the slow global economic recovery.