How the latest NDA cabinet compares with the last UPA cabinet

Following last week’s expansion, the 78-member cabinet of the National Democratic Alliance (NDA) government has crossed the 71 that the previous United Progressive Alliance (UPA) government signed off with.

The makeup of the NDA’s newest cabinet differs in several respects from that of the UPA’s last: while it draws less from the elected pool, it is younger, assigns more responsibilities to women and junior ministers, and draws from more states.

While both cabinets have an identical percentage of women, the NDA has assigned them greater responsibility. It is also drawing from a larger pool of parties (three versus one for the UPA). Elected by the people: UPA

The UPA cabinet had more ministers from the Lok Sabha (who are directly elected, unlike members of the Rajya Sabha, who are either elected by legislators or nominated). In the subset of those leading ministries, the percentage fell for both cabinets, but the UPA still did better. Half the ministers in both cabinets are older than the 60 years at which central government employees retire. Between the two, the NDA is slightly younger. The NDA has a greater percentage of ministers in the cabinet who either studied till school or are graduates. But the UPA had a greater share of ministers with post-graduate or higher degrees. While the NDA cabinet draws ministers from more states than the UPA did, it also shows greater concentration at the top. Interestingly, the list of the top six states of both cabinets has only three common entries: UP, Maharashtra and Rajasthan. 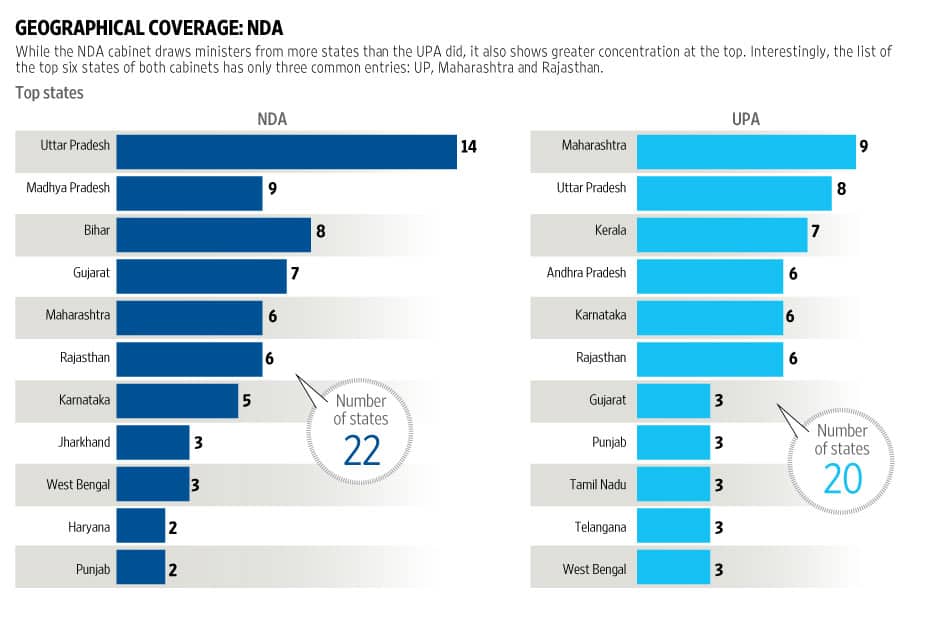 The NDA has a higher percentage of ministers with assets above ₹ 1 crore. However, the median value of assets of its council of ministers is lower than that of the UPA. The larger cabinet size of the NDA is because of more ministers of state, who report to a cabinet minister and are usually tasked with a specific responsibility in that ministry. At the senior cabinet-rank level, the NDA has fewer ministers holding multiple portfolios. At the junior MoS level, NDA ministers holding multiple portfolios number two-and-a-half times those in the UPA cabinet. Note: Composition and data for UPA cabinet as of April 2014, a month before it left office.