Bicholim, Goa: The reddish hills dot large tracts of the Goan landscape—mounds of waste soil and other debris that have been left behind after iron ore was dug out from some 95 mines. Accumulating since the 1960s, the dumps, as they are known, are estimated at 750 million tonnes (mt) and consist of top soil, mud and iron ore.

With little having been done to clean them up in 50 years, the dumps pose a serious environmental hazard, said central and state officials. The dumps trickle into the state’s rivers and occasionally collapse, flooding homes and fields with muddy water. The contaminated water has to then be painstakingly mopped up from homes and fields, an expert said. Iron ore mining began in Goa in the 1950s. The debris has mostly been dumped outside the mines as there is shortage of space—mines are dug close to one another in the hilly terrain. Miners say there is lack of clarity on how long the dumps can be stored for and whether they can be sold under the existing law. Chief minister Digambar Kamat said in an interview that he is seeking legal opinion on the matter. Many mine owners have not taken adequate care of the dumps, which need to be stabilized scientifically—they should be fenced, covered with some top soil, irrigated and planted with vegetation to prevent erosion.

There are specifications on the height and the slant the dumps can have. The material has to be put back into the pit when the life of the mine is over.

But not all mine owners have managed dumps as per the norms in Goa.

“Dump runoff is a common problem in Goa. They flow into fertile farmlands as well as into streams and waterbodies," said Ligia Noronha, director, resources, regulation and global security division at The Energy and Resources Institute (TERI). “Dumps are high and often steep. If dumps are not well managed, a heavy downpour can cause problems to the water bodies or to villages which are often just below," Noronha said.

In 2009, in Advalpal village, a dump belonging to Vedanta Resources Plc unit Sesa Goa Ltd, collapsed when a strong jet of water from the mine washed it away, flooding village homes and fields with muddy water. “It happened at about 9pm, when people were still awake. Had it been a little later when they were sleeping, it could have been a big accident," said Shyam Sunder Naik, a driver living in Advalpal village. A public interest litigation was filed and the matter is still being heard in the Bombay high court in Goa. 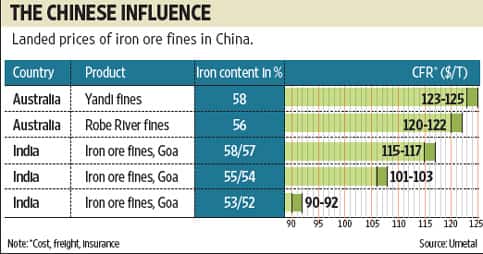 “So much dump got created because miners went wider instead of going deeper as it is easier to go wider," the official said, without wanting to be named.

Given the low grades of Goa’s iron ore reserves, and the fact that many of the mines are old, the only way miners could get sufficient iron ore out to satiate China’s demand was by mining more, and thus they created more dumps.

“In Goa the striping ratio is one to four. To win 1 tonne of ore, four-five tonnes of rejection has to be handled," said S. Sridhar, executive director of the Goa Mineral Ore Exporters’ Association (GMOEA). “As per law, in order to preserve minerals, permission to refill the pit has to be obtained from Indian Bureau of Mines (IBM). Only recently, maybe six-eight years back, such permission was given for partial re-filling."

Sridhar said in the past such permission to refill was given by IBM only after all mineral in the mine was exhausted.

But the central government official said many miners did not follow proper mine closure procedures not just in Goa, but all over India, which is also responsible for such huge volume of dumps in Goa.

“They should have backfilled this ore a long time ago or found a way of utilizing this lower grade ore through pelletization. But going for just the best pickings was the easiest, cheapest way to make profits," Noronha said. “Dumping the ore that has no market is a cost-shifting strategy, since no one is charging them for the environmental risks posed to others."

China, having consumed much of the higher grade iron ore fines, with iron content upwards of 59%, started asking for the lower grades in 2009.

This led mine owners to excavate the old dumps and about 25 mt of the 750 mt was exported in 2009 and 2010, the Goa mines department official said.

China, which has the world’s largest steel industry, aims to produce over 700 mt of steel not only for its own use, but to sell to the world to maintain its global dominance.

The powdery iron ore fines from Goa suit its requirements very well as it is cheap and it blends with high-grade ore with iron content of 65% from Australia and Brazil in their blast furnaces.

Sridhar of GMOEA said the law does not specify how much dump can be created or for how long it can be stored.

Earlier this year, the mines department in Goa ordered all mines not to touch their dumps till the issue of what to do with them was resolved.

“About 30-35% of those dumps can be used for back filling," said the official in Goa’s mines department.

The official in the central government said it was prudent for the dumps to be sold off to China while there was still a market for it, and thereby eliminating the environmental risk.

“The dumps should be sold off as fast as possible as long as China has a demand for it," the official said. “Otherwise nobody will buy it later."

Next: How miners in Goa may have jumped the red signal.