Mumbai: The Indian Institutes of Technology (IITs) are known for producing the best engineers and scientists. What is less well known is that they also breed world-class entrepreneurs.

Over the past five decades, IIT Bombay (IIT-B) alone has seen many of its alumni start and successfully run companies. They include Nandan Nilekani, co-founder of India’s second largest information technology services firm Infosys Ltd.

Bharat Desai, founder of Syntel Inc. and also an IIT-B alumnus, helped build the centre by donating $1 million in March.

Anand Kusre, who heads DSCE and is also a professor at the Shailesh J Mehta School of Management in the same institution, hopes these initiatives will enable IIT-B to “become a hub of entrepreneurship, similar to the role played by the Stanford University in the Silicon Valley".

“Most students have an idea, but don’t have a business model in place. Also, they have no idea about operations, marketing, funding, scaling up—issues that play a key role in building a business," said Kusre, explaining the need for a dedicated entrepreneurship centre.

DSCE offers a three-year course, which allows students to get a minor in entrepreneurship along with their engineering degree, and a basic programme on entrepreneurship for six months. About 250 engineering students have already enrolled for the classes, most of them with the intention to start their own companies.

“At the moment, I have a few ideas and this course shall help me give concrete shape to the ideas. I am looking forward to the next semesters, which shall teach me about funding, building a prototype and other business aspects," he said.

The course also gives students an opportunity to do an internship with a private equity (PE) investor or venture capitalist (VC) in the second year, create a prototype and write a business plan, according to Kusre.

Moreover, founders of big and small companies, including those like Desai and Vishal Gondal, founder and chief executive (CEO) of GOQii Inc., come as guest lecturers.

Those like Kamal K. Kumawat, a fourth-year electrical engineering student, who have less time on hand before graduation, enrol for short-term courses.

Kumawat has opted for a six-month course at the centre. “I founded an e-commerce deals company (dealwithus.co.in) in January and this course has helped me validate the idea, put in place a better business model and given me an understanding of customer needs, marketing, and other aspects of business," said Kumawat, who hopes that by the end of the course, he would have learnt to address concerns like fund-raising, hiring talent and marketing.

DSCE, according to Kusre, is complementary to all the other entrepreneurship initiatives of IIT-B. The institute’s five integrated development centres have students developing business ideas across various departments which include nanotechnology, biotechnology, mechanical engineering and environmental engineering.

IIT-B’s incubation centre, SINE, operates as an independent body with a staff of 10 people and has been funded by the government’s department of science and technology. 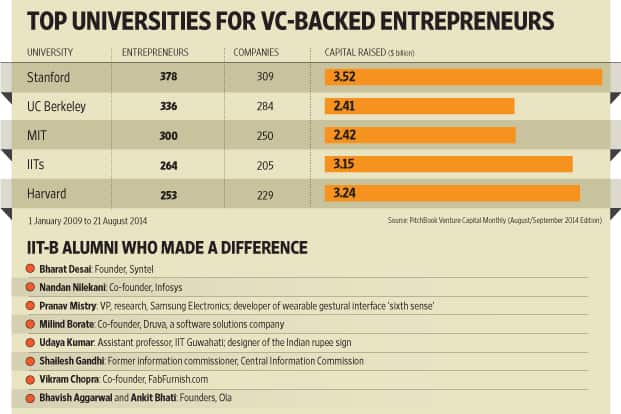 “Students at the institute learn technology even if it is across various sectors. We want to encourage students to start only technology ventures which don’t include creating mobile applications and e-commerce sites. Knowledge must be converted to wealth," said Milind D. Atrey, professor in-charge of SINE.

The incubator, he added, receives 25 applications every month, which are screened by a panel of entrepreneurs.

When a company is selected to be incubated at SINE, it is granted a soft loan of ₹ 20 lakh and is provided office space for a team of 8-10 at a monthly rental of ₹ 10,000. The incubation duration is typically three years, after which the company usually scales up and begins customer traction and revenue flow.

SINE has a 3-4% equity stake in the company till the latter raises its institutional round of funding.

SINE recently appointed Ajeet Khurana as its CEO. Khurana has been a Mumbai Angels investing member and an active personal (angel) investor.

SINE is currently incubating 16 companies and plans to expand its facility and provide support to incubate around 50 firms at any given time.

IIT-B will soon also have a research park that is being funded from a grant it received from the ministry of human resource development for the purpose. “The research park is estimated to be spread over 200,000 sq. ft area and is looking to house 200 research and development (R&D) units of private companies and corporates in the campus," said Atrey.

The building at the research park is estimated to have 20-25 floors, where companies will set up their R&D units. These companies, whose founders need not necessarily be from an IIT, will also get an opportunity to interact with the IIT faculty. The research park will also provide space for incubators to support start-ups, according to Atrey.

IIT-B also has a Tata Centre for Technology and Design that was established in March and focuses on developing technologies, products and systems in energy, water, healthcare, food, agriculture, education to serve low-income sections.

IIT-B also has an entrepreneurship cell—a student body that organizes, coordinates and initiates entrepreneurship-related activities on the campus. Its initiatives include Eureka—a business plan competition that is open to students and working professionals from all over the world.

A Eureka semi-finalist (2013), Bookpad Inc., for instance, became the first Indian tech start-up to be bought by Yahoo Inc.

IIT-B also has a deferred placement policy, whereby students can apply for job offers made by companies that come to the campus after three years in case the start-up the student is working on fails.

Entrepreneurship in the DNA

IITs combined ranked fourth, ahead even of Harvard University, in a listing of the top 50 universities that have produced VC-backed founders, according to a September 2014 study compiled by PitchBook Data—a US-based PE and venture capital research firm.

The study showed that over a five-year period, from January 2009 to August 2014, 264 IIT founders launched 205 companies, and raised $3.15 billion. Stanford University with 378 founders topped the list, followed by the University of Berkeley (336) and Massachusetts Institute of Technology, or MIT (300). Harvard had 253 entrepreneurs in the same period.

While all IITs do have a focus on entrepreneurship, IIT-B is the only one with a dedicated centre.

“At IIT Delhi, we have an entrepreneurship development cell (eDC) that carries out various initiatives to foster entrepreneurship. These include, Campus CEO, e-summit and social initiatives. We have a number of business plan competitions organized as well. However, as part of a curriculum, we have not offered any courses in entrepreneurship," said Ravish Ratnam, president of eDC Delhi.

At IIT-M, the Cell for Technology Innovation, Development and Entrepreneurship Support (C-TIDES) organizes talks, workshops, entrepreneurship week and other events.

“There are a number of students who are working on their start-up ideas and we provide them resources in terms of networks, funding and mentorship," said Swapnil Bhirud, core member (events) at C-TIDES. He added that start-ups are incubated at IIT-M Incubation Cell.

About 60 companies have been incubated at IIT-M, with a majority of them situated at the IIT Madras Research Park. However, the institute has no dedicated courses on entrepreneurship.

According to Sharad Sharma, co-founder of iSpirt (Indian Software Product Industry Round Table), a software product lobby, IIT-B has “a unique sense of functioning when it comes to entrepreneurship, primarily because it is perhaps the first educational institute in India where professors have been successful entrepreneurs, hence leading to a strong trickle-down effect for the students". He added, “Today IIT-B is at an inflection point from where it is going to take off with full force when it comes to entrepreneurship."