Why the H1B visa policy is in the line of fire

When some Americans talk about immigration, they picture people they want to keep out: the undocumented ones sneaking across the southern border.

But when some US businesses talk about immigration, they picture people they’d like to bring in, especially those with science, math or computer skills.

Now, US President Trump is considering overhauling the visa programme used by technology firms to hire tens of thousands each year.

The result could roil businesses from Silicon Valley to New Delhi.

During his campaign for president, Trump said the H1B visa programme, mostly used to hire technology workers, was a “cheap labour programme" that takes jobs from Americans.

He said it should be ended. A lot of jobs are at stake. In 2016, it took less than a week for applicants to exhaust the 85,000 petitions the government allots for H1Bs each year. 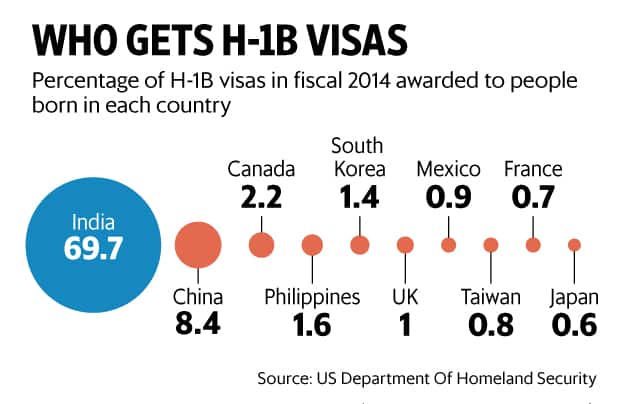 Indians receive more H1Bs than any other nationality.

Facebook, Google, Intel and Cisco Systems are among the firms that have lobbied Congress to increase the number of these visas; Facebook more than doubled its lobbying spending in 2016 from 2012. H1Bs, issued for up to three years with a possible extension for three more, aren’t the only ways US businesses can hire foreign help.

Seasonal agriculture workers come in under the H2A visa programme.

Movie stars, distinguished academics and professional athletes can get special US work visas set aside for those with “extraordinary ability".

Extraordinary bank accounts allow the rich to receive EB5 visas if they’re willing to invest at least $500,000 in the US and create at least 10 jobs within two years; a lot of this money has gone into real estate developments.

The US system of immigration categories and caps has its roots in a 1924 law meant to curb a wave of post-World War I immigration.

Quotas tightened after World War II as the nation faced a flood of Europeans fleeing Hitler and Communism.

The war also led to a dearth of farm workers; so, in 1942, the US signed an agreement that allowed Mexican labourers in for short-term work.

The Immigration and Nationality Act of 1952 permitted employers to hire skilled foreign workers to fill temporary positions; early on it was used to bring in Basque sheepherders to tend flocks in remote western areas.

The Immigration Reform and Control Act of 1990 created the H1A visa for nurses, to cope with a nationwide shortage, and the H1B for skilled people like scientists and engineers.

In 1998, during the tech bubble, the US Congress amended the law to allow more H1Bs to be issued for computer workers.

It stalled in the House of Representatives because some Republicans didn’t like that it included a pathway to citizenship.

In 2014, President Barack Obama used executive authority to expand a programme that allows foreign graduates in science, technology, engineering and math to work in the US for 29 months.

Opposition to immigration rises and falls with the state of the economy.

In tough times, Americans desperate for work tend to be none too happy to see businesses import labourers.

Employers in both the technology industry as well as agriculture say there aren’t enough Americans able to fill all the available jobs.

Food producers say crops are rotting in fields because there aren’t enough farmworkers after immigration crackdowns.

They also ­­worry that stiffer global competition for talent will make it more difficult to hire skilled workers in future. Indian outsourcing companies facing the loss of H1B hires as on-the-ground representatives say their American customers will end up paying more for services.

Opponents of H1B visas point to an increase in US students seeking degrees in science.

They also note that offshore outsourcing firms receive half of the H1B visas, allowing workers to be trained in the US who then take those technology jobs back to their home countries.

Opponents also say the companies are just trying to avoid paying higher wages to American workers, though some studies have shown that some increases in H1B workers resulted in higher wages for college-educated natives.

It’s unclear whether the arguments for or against the visa programme will outweigh Trump’s desire to fulfil his promise to put America first.