When running becomes a religion

When running becomes a religion

Bangalore/Chennai/Mumbai/New Delhi: Neville Bilimoria is drenched in sweat and breathing hard as he comes charging down the posh Boat Club Road in Chennai. He sneaks a look at his watch and takes a sip of water—it’s 7am and he’s been running for two hours, during which he’s covered over 20km.

A national rowing champion, Bilimoria took up running in 2010 and has kept on going since then—he’s completed 14 marathons in as many months with a personal best of 3 hours 52 minutes for the 42km distance. The 43-year-old immigration consultant, who has also participated in cross-training events, is training hard to take part in an event that’s even more gruelling—the 600km Bangalore Ultra BOB (Bangalore-Ooty-Bangalore) beginning 9 March.

He’s just one among a growing army of runners in India who are increasingly participating in big and small marathons held across the country. Last month, nearly 40,000 runners gathered in Mumbai to compete in the ninth annual Standard Chartered Mumbai marathon. That was nearly double the turnout since the event started in 2004.

The rise in the popularity of running owes much to the fitness trend—more people flocking to gyms, getting on their cycles, or putting in a couple of hours a day on a badminton or tennis court. It took sports management company Procam International, organizers of the Mumbai marathon, three years to get someone to sponsor the event. Standard Chartered eventually agreed to sponsor the first leg of the marathon. “When we started out nine years ago, this event was just a concept; we discussed and debated the idea of running. Back then, it wasn’t the culture of any city," recalls Sumeet Singla, regional head (corporate affairs), Standard Chartered.

The bank’s decision has paid off. Eight years on, over 20 sponsors and associate sponsors from health drinks to financial product companies are jostling for a piece of the event. To be sure, the advertising money generated by marathons may still be a minuscule fraction (an estimated 60-70 crore) of what an event like the Indian Premier League generates, but the concept is a hit, if the increasing number of runners is any indication.

Between Mumbai, Delhi and Bangalore alone—where the three premier marathon events are held—nearly 94,000 people run regularly. According to Procam, participation in the Airtel Delhi half marathon and the TCS Bangalore marathon has grown by as much as 30% in five years.

“Airtel’s success story is synonymous with determination, preseverence and ability to never lose sight of the long-term goal, just like a seasoned runner," said Bharat Bambawale, director, global brands, Bharti Airtel Ltd, in an emailed response, happy to bask in the glow of what has grown into a mass-participation event.

“Distance running is one of the fastest-growing sporting categories in India," said Vivek B. Singh, joint managing director, Procam International. Rahul Verghese, the Mumbai-based founder and CEO of Running and Living Infotainment, spotted a business opportunity in the trend early and launched a website aimed at people with a passion for running around five years ago, according to an earlier news report. An alumnus of the Indian Institute of Management, Ahmedabad (IIM-A), Verghese gave up his 25-year corporate career (with stints at Unilever, Nestle and Motorola) and started getting people to run for a living. He organizes marathons at locations such as Shimla and Jaipur. “We are organizing crosscountry runs at unusual places so that it translates into a vacation-cum-marathon experience."

New locations have also brought new partners into the ecosystem, including sponsors such as Rajasthan Tourism and the state government of Himachal Pradesh. Verghese said he has managed to rope in several advertisers, including print media companies.

Sponsors said they benefit from the association with such events. MARG, a local infrastructure and real estate company, sponsored the Chennai Marathon in 2008 and continues to support small-scale marathons. Atul Raja, group vice-president and head of corporate communications at MARG Group, said the sponsorship “definitely helped enhance the brand recall and create a stronger brand identity for all our business verticals".

Marathons may not be money spinners right now, but they do not cost a bomb to organize either. A large-scale marathon event costs about Rs5-8 crore, said one of the organisers of the Standard Chartered Mumbai marathon. Procam said the Delhi half marathon costs more Rs12 crore to put together. As the events become more popular, prize money is also increasing. This year’s Mumbai marathon had a total prize money of $340,000, up $15,000 from last year. The Delhi half marathon, too, raised prize money by as much as $50,000 this year to $260,000. Both events recently started separate prizes for Indian athletes.

The easy explanation for the growing number of runners in the country would be that it’s cheap to pursue. All that’s needed is a pair of sneakers and stamina. But that is not necessarily true. Ten runners that Mint surveyed at random said they spend on average anywhere between 1,000 and Rs2,000 a month on the sport. Some spend much more.

“It’s like putting oil on a door. You need to spend on apparel and equipment to ensure that your body functions smoothly," said Bilimoria, who raised Rs7.2 lakh for a children’s charity by running solo for 12 hours in January. 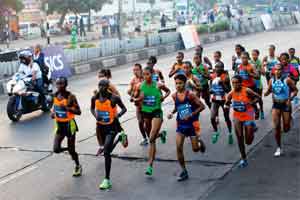 Different strokes: Runners in the Mumbai marathon in 2011 and 2012. Photographs by Hindustan Times, AFP

According to Technopak Advisors Pvt. Ltd, a management consulting firm, the Indian sportswear market is estimated at Rs3,500 crore and is growing at 20%. Footwear accounts for close to 60% of this. The rest of the market is comprised of apparel and accessories. Within footwear, performance (running) shoes are growing faster than the rest. “Now people are taking it very seriously—there is demand for technically superior brands," said Purnendu Kumar, vice-president, retail and consumer goods, Technopak. “Earlier, it was just about colours and designs."

The trend has also led to the entry of specialized performance shoe brands such as Asics (through Reliance Trends) and New Balance. In sports footwear, performance shoes account for 70% of the category, estimated an industry expert. Nike, Reebok, Asics, New Balance and Adidas sold about 500,000 shoes last year, he said.

Reebok spent a significant amount of its marketing budget last year to promote its running shoe Zigtech. Reebok is also the fitness and merchandise partner of the Delhi half marathon. Asics has joined hands with the Mumbai marathon.

In 2006, Nike launched the Nike+, a sensor that can be slipped into a shoe made by the company that will allow the runner to extract performance data to track progress. Without giving away sales numbers, both Reebok and Nike said sales of their performance shoes had seen an “encouraging" spurt.

Also gaining in popularity are trainers. Bangalore-based Santhosh Padmanabhan quit his software job with AMD in 2009 and started Runners High. He currently trains close to 150 people, having started off with 10 techies. Padmanabhan has roped in 10 other trainers to help him out. “I’m also putting a cap on the number of people I’m going to take in," he added.

His success has prompted others like Dharmendra D., who quit his job at KPMG to launch his own training company in October last year. “Right now, I’m making enough to sustain the business. But in two years, I expect it to really take off," he said. Trainers charge between Rs6,000 and 10,000 per session (a session is usually a three-month period) based on the kind of training an individual requires.

There are no specialized training areas though—people have to make do with “open-to -public" stadiums and parks.

Meanwhile, there are those who say a simple activity is being needlessly complicated.

“Running is an inclusive sport, but if you put it together with getting equipment and participating in events, it does become sort of elitist," said Virapandi T., unstrapping his Rs1,000 water bottle holder from his waist after a routine 15-20km Sunday run with local club Chennai Runners. In March, the club,with over 1,000 members, will celebrate its sixth anniversary.

Others like him are looking to go back to the basics and experiment by training barefoot or by using regular running shoes on Indian roads as many international athletes now advocate. There’s equipment on offer for this segment, too, as it happens—rubber foot gloves with no heel cushion, sandals and minimalist shoes.

“Essentially, it means cutting down on expensive shoes for your feet and making the transition to barefoot running," said Ashwin Prabu, an eight-year veteran international marathon runner.