Home > politics > news > More than scores, the quality of education is what matters: study

More than scores, the quality of education is what matters: study

More than scores, the quality of education is what matters: study

Bangalore: As the centre of gravity of technology development and innovation shifts to emerging economies, developed nations have begun taking stock of their science and math education, believed to be determinants of a country’s place in the new global economy. 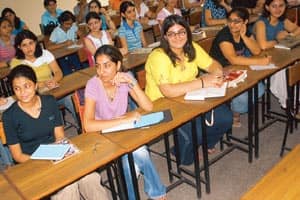 Growing disparity: While the top 2-5% of Indian graduates are world-class, the vast majority don’t even get beyond the high school level, says Vivek Wadhwa, an executive-in-residence at Duke University. (Photo: Vipin Kumar/ Hindustan Times)

India, which is beginning to implement some of the educational reforms recommended by the National Knowledge Commission, should have a “general science/math literacy test", say the authors, even though the country doesn’t yet participate in the international tests—Programme for International Student Assessment and Trends in International Mathematics and Science Studies.

“These scores indicate broad performance groupings and especially for large countries, more detailed care should be taken to look at the distribution of performance," says Lindsay Lowell, one of the co-authors.

In Making the Grade, Hal Salzman of the Urban Institute, and Lowell, of the Institute for the Study of International Migration, say poor performance in science and mathematics testing does not predict the inability to compete in an innovation-based economy.

“Improving education should be a priority for the nation, but erroneous interpretations of international test scores may drive economic and competitiveness policy in the wrong direction."

“These tests are flawed and irrelevant. China and India, the two countries that are rising most rapidly, and which America is worried about, don’t participate in these international tests," says Vivek Wadhwa, an executive-in-residence at Duke University, UK, and a co-author of a 2008 study titled Getting the numbers right: International engineering education in the US, China, and India.

“The challenge for India is structural, and infrastructure, not testing levels," says Salzman. He thinks expansion of the top tier is needed, but it “seems that’s a matter of will rather than know-how".

The challenge is to reach the masses, it doesn’t matter what these tests say, says Wadhwa. “The top 2-5% of Indian graduates are world class—the vast majority don’t even get beyond high school. Imagine the progress if India increased this (percentage of graduates with high standard) to 20-50%."

Europe, on the other hand, has a different problem. In Science teaching must evolve, Andrew Moore, manager of the Science and Society Programme at the European Molecular Biology Organization, says: “Evolutionary theory, study and knowledge moved on dramatically in the latter half of the 20th century, but school teaching, curricula and teacher training are still in the primeval soup era."