Party members and some analysts credit the Prime Minister, while others saypolitical strategy at work, not personal charisma

New Delhi: Was the much-touted Modi wave—credited for the electoral resurgence of the Bharatiya Janata Party (BJP) this year—also at play in the party’s victory in Jharkhand and its best performance ever at the hustings in Jammu and Kashmir (J&K)?

The party and political pundits believe that to be the case. BJP president Amit Shah, at a press conference in the afternoon on Tuesday, credited the party’s performance to the “people’s love" for Prime Minister Narendra Modi, who led the party back to power at the centre in the April-May general election after a gap of 10 years.

The BJP won 25 seats in the 87-member J&K assembly to finish a close second to the People’s Democratic Party (PDP), which clinched 28 seats in the state torn by a two-decade insurgency. In Jharkhand, it sealed power for the first time with 37 seats in the 81-member assembly; its ally, the All Jharkhand Students Union won five.

It’s the first time that Jharkhand, where instability has been the hallmark of politics since the mineral-rich eastern state was carved out of Bihar in 2000, has handed a majority to any political dispensation. 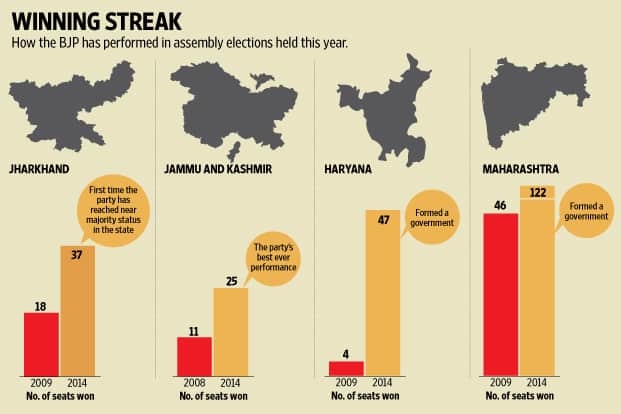 The performance was the year-end icing on the cake for a party that won elections in Haryana and Maharashtra in October after becoming the first poltical entity in 30 years to win a majority in Lok Sabha on its own. Shah credited the victory in the national elections to an electoral “tsunami" in favour of Modi.

As he did in the national election, Modi spearheaded the party’s bid for power in all the state elections, campaigning mainly on the plank of ensuring good governanace and economic development. In J&K and Jharkhand, he spoke at multiple rallies, tailoring his speeches to address issues on the ground.

“In J&K, his pitch was against corruption and dynasty politics, the baap-beta sarkar (father-son government), whereas in Jharkhand he promised political stability," said political analyst and academic Manisha Priyam.

“There is a strategy worked out for every state, he does not take anything for given," Priyam said.

According to Priyam, the Modi wave is not about his personal charisma but rather the political strategy he adopts. “It is quite clear that Modi does not work on any prescribed script…he concentrates on each election as if it is an exam," she added.

To be sure, the BJP’s Mission 44 in J&K—the goal of a simple majority in the state assembly—was thwarted and it won most of its 25 seats from the Hindu-majority Jammu region, drawing a blank in the Muslim-dominated Kashmir valley.

In Jharkhand, with 19 seats (one more than its previous tally), the Jharkhand Mukti Morcha (JMM) has emerged as an opposition force to reckon with.

“In that regard, I don’t think we can say there was a complete Modi wave in Jharkhand. With an effective leadership in charge of the opposition, in this case the JMM, the BJP’s march was halted," said Mumbai-based political analyst Jai Mrug. Even so, as the second largest party in J&K, the BJP is set to wield greater political clout. Its rise to power in Jharkhand promises an end to a nearly one-and-a-half decades of political instability in the state that’s home to 40% of India’s mineral wealth and 35% of coal reserves, but remains a laggard on most development indices. Jharkhand has seen nine governments come and go since its creation.

As it wraps up 2014 on a high note, the BJP’s sights are trained on the politically crucial states of Bihar and Uttar Pradesh, where the Modi wave theory will be put to the test in 2015 and 2017, respectively. The two states together send 120 members to the 543-member Lok Sabha.

Some analysts say the party should guard against any sense of complacency. “The victory in Jharkand and Jammu is a ‘polluted’ Modi wave. Yes the development plank is still reeling voters in, but the hope that the aspiring middle class has invested in Modi is gradually getting dented," said Pramod Kumar, director of the Chandigarh-based Institute of Development and Communication, a think tank.

“This is primarily due to the fringe elements of the party, who, with their majoritarian tendencies, are polluting the wave," Kumar said in a reference to the aggressive targeting of minority communities by hardliners in the BJP.

“Their success of today is a cautionary tale for tomorrow. They have to make only development and growth their calling card," he added.