Child brides in the classroom

For girls trying to reclaim their lives after being pushed into child marriage, education makes all the difference

Pali, Rajasthan: What does attending a wedding mean to a 13-year-old? New clothes? Jewellery? Binge eating and late-night chats with cousins?

For Padma Pawar, now 21, of Gudakalan village in Rajasthan’s Sojat block near the city of Pali, the experience wasn’t much different even though she was the bride. She says ruefully, “What does a 13-year-old really know?"

What she does remember of that fateful day in 2007 was being “giddily happy".

“Everyone was fawning over me, I was the centre of attention. Yes I knew I was getting married, but beyond that I had no thoughts on the subject," she says.

Padma was supposed to continue living with her parents till her gauna (going-away ceremony) a few years later. But within six months of the wedding, having just cleared her 8th standard exams, her in-laws insisted on taking her to her new home. Life was never the same again.

Padma talks fast, giving details of her wedding and the events that followed. She starts off confidently: a “good" first few months followed by months of physical and mental abuse. From waking up at 4 am to working in the fields to suffering domestic violence everyday, not just at the hands of her husband but also her in-laws.

And then, suddenly, her eyes fill up, her voice quavers, and she stops talking for a moment to compose herself.

A day earlier, talking to Mint about her abusive marriage, another Pali-based woman, 23-year-old Pinky Bhatti, too, had stopped in the same manner: tears brimming over, narrative stalled.

Pinky too was married off before she reached 18 years of age but her family had let her finish class 12. Yet the abuse meted out to both was independent of their age and educational qualification.

The Prohibition of Child Marriage Act, 2006 prohibits the marriage of girls under 18 and boys under 21. Apart from allowing for an annulment of such unions, it also has provisions for those who aid and abet such unions.

According to a report by IndiaSpend, a data-based news website, nearly 17 million Indians in the age group of 10-19 are married; of these, nearly 13 million are girls.

The Annual Health Survey of 2013, conducted by the central government, reveal that over 14% of girls in Rajasthan were married before they turned 18, the legal age. A 2013 report by UNICEF on child brides states that one of three child brides in the world is in India.

“Money, traditional beliefs, dowry… there are plenty of reasons why people think it’s better to marry their girls off when young," explains Meena Kanwar Bhatti, communications manager at Educate Girls, a non-governmental organisation (NGO) that works towards reducing gender disparity in education. In an attempt to adhere to tradition, families sometimes end up pushing their daughters into a situation from which few manage to escape.

“Do you know what it feels like to be destroyed every day by words or abuse? It breaks you from inside," says Padma. Yet, like Pinky, she says she had no intention of walking out on her husband. But a routine visit to her parental home became first an involuntary separation and then a determined break after her in-laws refused to take her back. “My father wanted an assurance from them before the panchayat that they would stop beating me. They refused to give it," says Padma.

For Pinky, it was her volunteer work at the local village school, ironically encouraged by her father-in-law who thought that it would bring in extra money, which became the bone of contention. “My husband’s family had always mocked me for my education. I was expected to work from dawn till bed time and was repeatedly told that they would have preferred an illiterate daughter-in-law," she says. 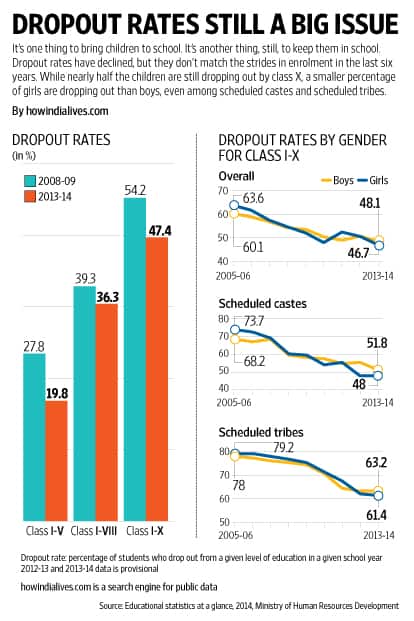 Today, however, it is the pursuit of education that has given both these young women a new direction in life and the ability to dream big. Padma volunteers at the local government school as a member of Educate Girls; Pinky works at the service desk of the NGO in Pali. Both are now pursuing their graduation through correspondence.

Back at her parental home, Padma, with the encouragement of her parents, went right back to school after a gap of three years. “People laughed and asked, ‘Why do you want to study? It’s not as if you are going to work.’ But education is much more than about getting a job, isn’t it? It is about being aware of every aspect of life, being knowledgeable; it is about being a different person," she says.

It is her education, for instance, that is making Padma insist on a legal divorce from her abusive husband as opposed to a dissolution of the union by the panchayat, the norm in her community, where, fortunately, her separation is not a social stigma.

Nine of the 26 worst districts in India in terms of the gender gap in education are in Rajasthan, the state with the lowest female literacy rate. Pali and Jalore districts are among the worst affected.

“The biggest hurdle to education of girls is the mindset. People ask, ‘Why do you want to educate girls? What purpose does it serve?’" says Meena.

Issues such as distance, lack of women teachers and toilets are some of the other hurdles. The government primary school in Raira Khurd village in Pali, for instance, has only one teacher for more than 200 students. Two toilets have been constructed for girls but are unusable.

As a Team Balika at the school, 20-year-old Shobha Kumari teaches thrice a week and is a “godsend" to the lone, work-worn teacher. “I enjoy it but…," she trails off. Team Balika volunteers are not paid and for Shobha who is pursuing her bachelor’s degree, extra cash would be welcome in supplementing her expenses towards her annual fees of ₹ 3,000 and the cost of books and supplies.

With two younger sisters still in school, Shobha’s wedding had been arranged to a boy from a neighbouring village when she was just three years old. But at some point her father decided to call it off. “I never asked him why but I am very glad that he did," she says. One of her friends from the village has joined the police and Shobha is keen to pursue a similar path though her father Bhanwar Lal has different plans for her and has been meeting families in the hope of cementing an alliance. “They all want dowry. I can’t afford it. I tell them that she will do a B.Ed, be an earning member, but that is secondary," he says.

“Many young girls are quite muddled about why they are pursuing an education. They still don’t put themselves first. Their mothers and grandmothers are uneducated and conform to norms and the girls doubt their own ability to take decisions," feels Meena, who has worked extensively on the ground to convince recalcitrant parents to send their daughters to school.

But there is no diffidence in Padma’s demeanour. She knows her parents are not in favour of her seeking a divorce, but she says that is what she believes is the right thing to do. Her father wanted her to contest the panchayat elections as the position of a woman panch was open but she refused. There was a time, she says, when she wouldn’t have had the courage to defy her father but it’s a different story now.

“Earlier I wouldn’t have been able to speak with you and share my story. But studying and volunteering have given me a lot of confidence," she says.

Pinky echoes Padma’s thoughts. “If I had been more educated then I would have been more careful in my choice of a life partner," she says. Her favourite subject is sociology though these days; she is very interested in coding as well. She also provides private tuitions to students.

Education has given Pinky a voice, and no one is more aware of this than her own father. When the panchayat was pressuring him for a reconciliation with her in-laws, he took Pinky to present her own case. “I told them, ‘Listen to her. Hear what she has to say’. She was articulate and confident and stood her ground despite their disapproval," says her father Chela Ram.

Pinky and Padma are luckier than most; they were able to walk away from abusive marriages. “Even now my life is still governed by what happened to me, dimaag se nikalta hi nahi (I can’t get it out of my head)," says Padma, adding, “so now I focus on being happy. I owe it to myself to be happy. I think if more girls are allowed to study till class 12 or even BA, they will avoid my fate and that is a big step forward isn’t it?"

This is the second of a five-part series on educating girls.