Krishna to take up terror issue during Pakistan visit

Krishna to take up terror issue during Pakistan visit

New Delhi: India will seek to revive a panel focused on improving ties in less contentious areas of its relationship with Pakistan even while keeping its key concern on terrorism on the table during external affairs minister S.M. Krishna’s visit to Pakistan later this week.

The India-Pakistan Joint Commission—first constituted in 1983 and co-chaired by the foreign ministers of the two countries—has kept its attention on agriculture, health, science and technology, information, education, information technology (IT) and telecommunications, environment and tourism. And India and Pakistan are set to hold its sixth meeting on Saturday in Islamabad, said people familiar with the developments. 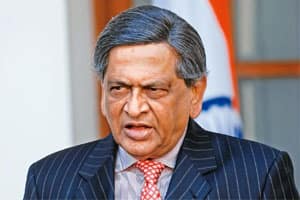 “The sixth edition of the joint commission that will meet will come up with some ideas of cooperation in various segments," the person added, pointing out that the issues related to economic and commercial areas. The aim of the joint commission is to improve the “nuts and bolts" of the relationship while keeping discussions going on contentious issues such as Kashmir, which sparked three of the four wars between the two neighbours.

Trade has been the main driver of relations between India and Pakistan since last February when the two countries resumed dialogue that had been stalled by the Mumbai attacks in 2008. Since the resumption of the dialogue, India has relaxed rules to alllow Pakistani investment into India and both sides are working on ways to allow their banks to operate in the other country. A visa pact that aims to improve people-to-people contact and business links between the two countries has been finalized and only needs to be signed. Earlier this month, India’s cabinet reduced the South Asian Free Trade Area (Safta) sensitive list for Pakistan by 30% to 614 items. And last week, Indian commerce secretary S.R. Rao said India would propose the start of direct flights between New Delhi and Islamabad in the forthcoming talks between the commerce secretaries of India and Pakistan.

For its part, Pakistan has said it will grant India most-favoured nation status by December this year. It has already moved from a positive list based trading system to a negative list.

India has been pushing Pakistan to bring to justice the planners of the 2008 Mumbai attacks that claimed the lives of 166 people when Pakistan-based militants belonging to the Lashkar-e-Taiba group targeted multiple locations in India’s commercial capital. Pakistan has arrested seven people in connection with the case but the pace of the trial has been slow.

“India is trying to bring about a change in the direction of ties with Pakistan. But to do that we need an enabling framework—namely Pakistan should not be seen to be supporting terror," said C. Uday Bhaskar, analyst with the South Asia Monitor, a Delhi-based policy forum. India should hold Pakistan to its promises on terrorism, he added.

Besides his meeting with Khar, Krishna’s engagements include meetings with Pakistan president Asif Ali Zardari, Prime Minister Raja Pervez Ashraf and leaders of political parties. On Sunday, Krishna will travel to Pakistan’s cultural capital Lahore, where he is expected to visit the mausoleum of the poet Mohammed Iqbal, besides Data Darbar, considered to be among the oldest Muslim shrines in the sub-continent.