Minority women: A court in their corner

Ever since the Shah Bano case, the Supreme Court has given a series of judgements that give secular laws precedence over personal,religious codes

Quietly and unobtrusively, the Supreme Court has over the past few years done what no government has dared to do—speak up for the rights of minority women.

In the first quarter of this year alone, it has delivered a series of judgements that has given secular laws precedence over personal and religious codes.

On 16 April—coincidentally just days before the 30th anniversary of the Shah Bano judgement—a two-judge bench ruled that Muslim women are entitled to maintenance beyond the Muslim personal law-mandated iddat period (roughly three months after divorce).

Justices Dipak Misra and Prafulla C. Pant ruled that Muslim women are entitled to seek maintenance under section 125 of the Criminal Procedure Code which grants the same relief to wives, children and parents. The judges also castigated family courts for delays, saying they were being “absolutely apathetic" in granting maintenance.

The judgement holds small consolation for Akhtari Salim Shaikh who bore six children before she says her abusive husband threw her out of their home in Indore, Madhya Pradesh, after pronouncing talaq (divorce) three times. That was 20 years ago.

“Forget about mehr (the amount of money promised at the time of marriage) or maintenance, I didn’t even have the train fare to return to Mumbai," she says. Now 50, she works as an ayah for a private nursing agency and says she welcomes the court judgement, but it has little meaning for women like her who have “no time to run to the courts".

But at least, she adds, “It gives an option to women like me."

In the courts, it’s not just maintenance that has pitted civil law against religious personal law. Earlier, in February, another two-judge bench, upholding an Allahabad high court judgement, ruled that although Muslim personal law granted men the right to have four wives, polygamy “was not integral part of religion".

The case was filed by Khursheed Ahmad Khan against the state of Uttar Pradesh for sacking him from his job in the irrigation department because he had married a second time without divorcing his first wife—a violation of conduct rules. Citing Article 25 of the Constitution (the right to practice and propagate any religion), justices T.S. Thakur and A.K. Goel upheld his dismissal and observed, “A practice does not acquire the sanction of religion simply because it is permitted." 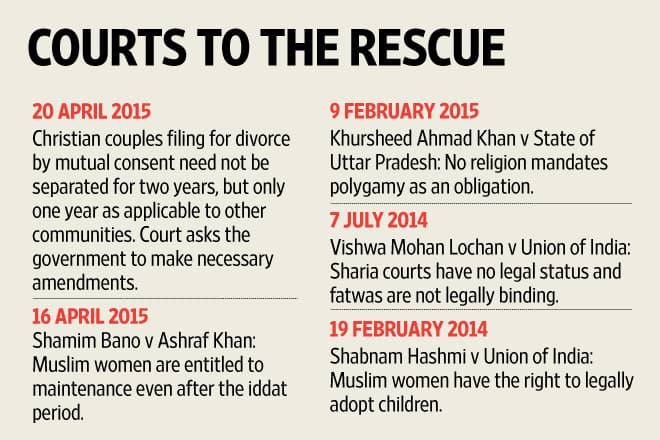 It’s not just Muslims. Questioning the existing law that mandates a two-year separation period for Christians seeking divorce by mutual consent, against one year for others, justices Vikramjit Sen and A.M. Sapre pointed out that the distinction violated Articles 14 (right to equality) and 21 (right to life and liberty), and asked the Centre to make the necessary amendments.

In July last year, the apex court created a stir by ruling that sharia courts have no legal status and that religious decrees and fatwas (edicts) are illegal if they tread on the rights of an individual. Prompted by at least three different fatwas against women who had been raped by their fathers-in-law, the petitioner, Vishwa Mohan Lochan moved the court to ban Dar-ul-Qazas, or Islamic courts.

The Supreme Court refused to ban them, saying they functioned as an “informal justice delivery system with an objective of bringing about amicable settlement between the parties". However, justices C.K. Prasad and P.K. Ghosh ruled that fatwas had “no legal sanction and cannot be enforced by any legal process".

Earlier still, in February 2014, a three-judge Supreme Court bench headed by then Chief Justice of India, P. Sathasivam ruled that Muslim women had the right to legally adopt children, even though their personal law did not give them that right.

“Personal beliefs and faith, though must be honoured, cannot dictate the operation of the provisions of an enabling statute," ruled the court. In other words, when personal laws come into conflict with secular laws such as the Juvenile Justice (Care and Protection of Children) Act, the secular law would prevail.

“The courts are moving more and more towards granting a universal scheme of rights regardless of religion," says Supreme Court advocate Mihira Sood. “By granting these rights, the courts are providing an option to women who have often been prevented from challenging traditional norms."

Advocate Malavika Rajkotia, who is working on a book on family law, agrees: “These are small little efforts towards uniformity which parliamentarians cannot address because it is such a hot potato." However, Rajkotia cautioned that it is important for courts not to overextend their brief, but allow space for minority beliefs and practices. “There has to be an approach of mutual respect and maturity," she says.

The laws of India apply equally to all citizens, except in personal matters concerning marriage, divorce, inheritance and adoption where different communities are governed by their personal or religious laws. Demands for a common civil code have been made since Independence and its implementation is a directive principle under Article 44 of the Constitution.

While Hindu personal law has undergone several changes and reforms in matters of marriage, succession and adoption pushed through by the Jawaharlal Nehru government in 1955-56 and even as recently as 2005 when amendments to the Hindu Succession Act ensured that daughters could claim a share of joint family property and even ask for its partition, women from other faiths and religions have not been as lucky.

Married at the age of 22 and the mother of a two-year-old son, Sabiha Khan received a triple talaq in the form of a letter from her husband. When she approached a Dar-ul-Qaza to say she had received neither mehr nor any financial assistance for herself and her son, she was told that the divorce was valid. She now lives with her parents.

Samreen Khan, an MBA, on the other hand, wants to divorce her husband on grounds of cruelty, but the Dar-ul-Qaza she approached says she cannot get a divorce (known as khulla) without her husband’s consent. As a result, she has filed for a divorce in the civil courts.

The relative confidence with which women like Samreen Khan can approach the courts over such matters is underpinned by recent legal precedence.

On 23 April 1985, the Supreme Court ruled to grant maintenance to Shah Bano Begum, a 62-year-old Muslim mother of five who had been divorced by her husband. The judgement was hailed as a milestone in the granting of rights to Muslim women, but it led to a backlash from the orthodoxy, including the All India Muslim Personal Law Board (AIMPLB).

The Rajiv Gandhi government quickly enacted the Muslim Women (Protection of Rights under Divorce) Act, 1986, under which divorced Muslim women were entitled to maintenance only for the iddat period, after which they would have to depend on relatives or else Waqf boards (charitable trusts), effectively undermining the Shah Bano judgement.

The first challenge to this new law came in the form of a Supreme Court judgement in 2001 when a five-judge bench heard a petition filed by Danial Latifi (ironically, Shah Bano’s lawyer) who was appealing against a high court decision ordering him to pay his divorced wife—they had been married for 43 years—a sum of ₹ 179 a month.

Latifi argued he had paid his wife—the mother of five children—a maintenance of ₹ 200 during the iddat period as well as ₹ 3,000 as mehr and was, therefore, not obliged to pay any further maintenance under Muslim personal law.

After hearing interventions from Muslim organizations including AIMPLB, the court ruled that the Muslim Women Act had to be read in conjunction with the constitutional rights to equality and life with dignity. In other words, the lump sum granted to a divorced Muslim woman had to be sufficient to maintain her for life.

Ever since that landmark judgement, the Supreme Court has consistently ruled in favour of women—with little or no opposition from religious leaders.

“There is a new environment and realization that you cannot deny women their rights under the Quran," says former minister Arif Mohammad Khan, who resigned in protest at the passage of the Muslim Women Act. “People today realize that the law of the land is not asking Muslims to do anything that is prohibited in Islam, and these judgements are welcomed."

In 2002, for instance, the court held that a Muslim man does not have a unilateral right to divorce his wife by triple talaq and had to provide good reasons for a divorce.

In the years since Shah Bano, Muslim women too have organized and established new organizations that represent their interests. With 45,000 members in 15 states, the Bharatiya Muslim Mahila Andolan (BMMA) is one such organization that seeks solutions and mediation in matters of marriage and divorce in what it sees as the true spirit of Islamic gender equality.

In Lucknow, a group of Muslim women set up their own law board, the All India Muslim Women Personal Law Board, in 2005. These organizations have evolved a model sharia Nikahnama (marriage contract) that gives equal rights to men and women.

“Poor women often have no access to the courts and the justice system," says Noorjehan Safia Niaz, BMMA co-founder. BMMA has prepared a draft Muslim Family Act based on Quranic values, which Niaz says grants women enormous rights. Many of its provisions coincide with the recent Supreme Court judgements on triple talaq and polygamy, and some even lay down the terms under which women can seek divorce under the tenets of the Quran.

“We are providing an alternative to women that is in consonance with the Quran and its concept of rights to women," says Niaz.

Meanwhile, on Tuesday, the Supreme Court adjourned a hearing of a petition by Goolrukh M. Gupta, a Parsi woman who has challenged the Valsad Parsi Anjuman Trust’s decision to bar her from offering prayers at the Fire Temple after she married a Hindu. Her petition challenges an earlier high court ruling to uphold the trust’s decision “on a principle…that until her marriage, a woman’s decision as to which decision she follows is dependent upon the religion of her father and after her marriage, it is dependent on that of her husband".

The matter was adjourned to 11 August.

In this verdict, as with the others, all eyes will once again be on the Supreme Court.