Srinagar: Jammu and Kashmir chief minister Ghulam Nabi Azad resigned on Monday after weeks of violent protests over the transfer of government land to a Hindu shrine in this Muslim-majority region.7df99ec0-4c30-11dd-b837-000b5dabf636.flv

At least six people were killed and hundreds wounded in protests over the dispute, leading the People’s Democratic Party to withdraw support from the ruling Congress party in the state.

State governor N.N. Vohra had asked Azad to prove his majority in the assembly on Monday. But before the house could vote to ascertain whether Azad had the required numbers, he decided to resign. 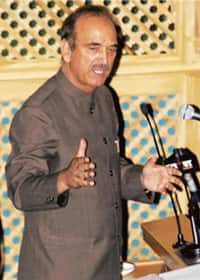 Way out: J&K chief minister Ghulam Nabi Azad addresses the state assembly before submitting his resignation, in Srinagar on Monday. Azad’s exit may push the state into early elections.

“I am going to the governor’s house to tender my resignation," Azad told the house after a fiery speech blaming both Muslim and Hindu fundamentalists for the crisis. “People do politics in the name of religion and take the innocent public towards destruction," he said.

The governor has accepted Azad’s resignation “but has asked him to continue as caretaker chief minister until an alternate arrangement is put in place," said Madan Mantoo, a spokesman for the governor’s office. The unrest was sparked when the state government transferred 40ha of land last month to the Shri Amarnath Shrine Board, a trust running the Hindu shrine, a place for an annual pilgrimage.

Muslim Kashmiris denounced the land transfer as an attempt to build Hindu settlements in the area and alter the demographics in India’s only Muslim-majority state.

Faced with some of the largest protests in nearly two decades, Azad revoked the order — a move that angered Hindus who staged protests in Jammu, a predominantly Hindu area.

After Azad’s resignation, other parties will be given a chance to form a majority coalition. If they fail, elections, already scheduled for October, could be brought forward.

In the past, Islamic separatists have targeted the pilgrimage, charging that New Delhi uses the annual religious event as a political statement to bolster its claim over the Himalayan region that is divided between Pakistan and India but claimed by both.