Thanks for Visiting Mint
You seem to have an Ad Blocker on. Please turn it off in order to continue, or whitelist Mint
HOW TO TURN OFF AD BLOCKER
OR
REFRESH IF YOU ALREADY TURNED OFF THE AD BLOCKER
Home >Politics >News >Sushil Kumar Modi | We will have to wait until April 2013 for GST

New Delhi: The empowered committee of state finance ministers, at its two-day meeting in Bhopal, agreed to tax services based on a “negative list" to ensure broad-based coverage. It also set a deadline for the computerization of states’ commercial tax departments, removing two major hurdles for the implementation of the goods and services tax (GST) in India. Services that are part of the list won’t be taxed. 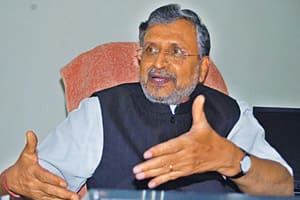 The empowered committee took some important decisions at its meeting that are being considered as a big positive for the GST implementation process. How do you think the Centre should reciprocate to ensure that GST is implemented soon?

The central government should ensure that the states are compensated for revenue forgone due to the gradual phasing out of the central sales tax (CST). It will help in improving the confidence of the states on the Centre.

The Centre should be more flexible. In a country like India, where (there are) so many different states, and economic conditions are very different, you cannot use one stick for each and every state. There are many issues on which the states have a unanimous view, but even they have not been incorporated in the Constitution Amendment Bill.

States are concerned about a dispute resolution authority. There can be a provision wherein the GST council can itself work out a mechanism to resolve disputes among the states. Another issue is uniform GST rates. There can be a floor rate with a band. I have a personal feeling that the central government will keep these things in their mind. The standing committee will also address these issues.

What is a realistic deadline for implementation of GST?

These things depend on many things. It requires a two-thirds majority. The central government should take a political initiative. It should meet important political parties and they should also be taken on board. Whatever issues were there have been expressed by the state governments. I cannot comment on the time frame. But 1 April 2012, is impossible. It should not be brought in between also as some experts have suggested.

Even the IT (information technology) infrastructure is not ready. For a successful GST roll-out, a robust IT infrastructure is needed. Though the empowered committee had given its nod for setting up a GST network, it is yet to get a cabinet nod. It will take around eight-nine months for the network to be in place after the cabinet gives its nod. So 1 April 2012 is ruled out. It cannot be brought in between. Then naturally we will have to wait for 2013.

We will request the central government to pay the CST compensation to the states. Besides this, the states will raise four issues collectively.

The second issue is VAT (value-added tax) on imports. The state governments will request that they be allowed to levy VAT on imports.

The last issue is that central government directly gives funds to state societies or districts rather than giving it to the state governments. For example, under the Sarva Shiksha Abhiyan, state education societies get funds directly. That does not get reflected in the states’ consolidated funds.

Have state tax collections started feeling the effects of a slowing economy?

Till now, VAT collections have grown at around 20% and not shown signs of a slowdown. But we are also scared as we feel that the euro zone crisis could also affect state revenues. Mainly the southern, western and northern states may feel some impact in the coming days.