New Delhi: The stand of the Congress party-led United Progressive Alliance to restrict benefits under the newly minted Forest Rights Act has triggered an angry exchange of communiques with the Left Front ruled West Bengal government.

The ministry of tribal affairs has reaffirmed in its latest response that forest dwellers with access to revenue land should not become beneficiaries. In other words, the benefits of the Forest Rights Act is to be restricted to only those people, made up largely of scheduled tribes, who are traditional forest dwellers. 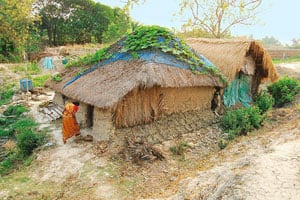 Tough survival: A tribal dwelling in Ghoramara island, Sundarban. The Act is meant to provide rights to the scheduled tribes and other forest dwellers who have resided on the forest lands traditionally. Indranil Bhoumik/Mint

Implementing this could potentially pose political problems to the state government as it will have to deny benefits to some of the people, especially at a time when it is under severe pressure for the manner in which it handled the acquisition of agricultural land for setting up of industrial projects in the state.

In a riposte to the Centre, Brinda Karat, politburo member, Communist Party of India (Marxist), sent a missive this week to the ministry, claiming that the ministry’s position was faulty in law and stood against the spirit of the Act.

The Scheduled Tribes and Other Traditional Forest Dwellers (Recognition of Forest Rights) Act was introduced by the UPA in its earlier term when the Left was part of the coalition. The Left parties had at that time argued on several forums with the Congress to get the Act enacted quickly. It had also lobbied hard to prevent dilution to the Act that the wildlife conservationists had argued steadfastly for.

The Act is meant to provide rights to the scheduled tribes and other forest dwellers who have resided on the forest lands traditionally.

It was contended then that several hundreds of thousands of tribals and other communities had been illegitimately deprived of their rights when the Indian Forest Act, 1927, and thereafter Forest Conservation Act, 1980, were introduced. The Forest Rights Act was meant to be a populist move of the UPA to legalize such landholdings.

But the letter from the nodal tribal affairs ministry threatens to artificially limit the number of beneficiaries under the Act, Karat has contended.

The conditions the ministry prescribes, if applied, would have wide implication for tribals and forest dwellers, who depend on revenue land for their livelihood, be it as hired or exchange labour.

“There is no such mention of ownership of revenue land in the eligibility criterion in the rules. This has always been very dangerous. The Act has always intended to keep out pure commercial interests and not anyone who is not dependent on forest land, but what does bona fide mean?" said a close observer of the Act and its implementation, who did not want to be identified.

One of the drafts contained more detailed explanation of the term bona fide to include hired labour but those complexities didn’t make it into the final draft, he added.