New Delhi: India will soon have a law for so-called international financial services centres (IFSCs) such as the Gujarat International Finance Tec-City (GIFT City) that was launched by finance minister Arun Jaitley on Friday.

Speaking on the sidelines of the launch function, financial services secretary Hasmukh Adhia said the government is working on appointing a regulator for IFSCs and also drafting a law for them.

Hinting at tax concessions in such centres, Jaitley said an internationally compatible and non-adversarial tax regime is required to make IFSCs globally competitive. 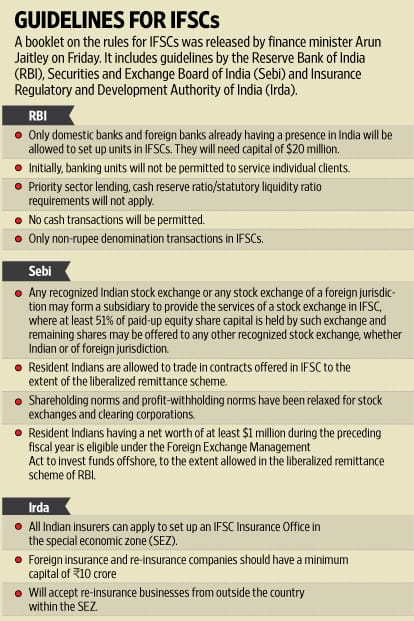 “We are trying to present a taxation regime that is internationally compatible, which is non-adversarial," the finance minister said.

In the absence of IFSCs in India, the country has lost roughly 50% market share in the two most important India-related financial products—the rupee-dollar futures contracts traded on the Dubai Gold and Commodities Exchange (DGCX) and the Nifty futures contracts traded on the Singapore Exchange (SGX), which are popular among international traders.

GIFT Co. has proposed to the finance ministry that companies operating out of IFCS be exempt from all tax, including the minimum alternate tax, managing director and chief executive officer R.K. Jha said.

Currently, firms operating in the centre have to pay this levy.

“The announcement of regulations and guidelines will create a lot of excitement, but we need the right legal system and taxation norms. Also, GIFT has to be like a foreign territory," he said. “It will take about a year for it to start operations and we are aiming for full-fledged operations in three years’ time. By that time, we would have invested ₹ 4,000-5,000 crore in infrastructure."

Of the 880 acres allotted to GIFT City, about 250 acres is earmarked for the IFSC. This area will be treated like a special economic zone (SEZ).

In February, National Stock Exchange of India Ltd announced the creation of an international exchange in GIFT. The bourse followed BSE Ltd, which in January signed a similar deal with GIFT that entails an investment of ₹ 150 crore.

Kotak Mahindra Bank Ltd on Friday signed an agreement to set up an offshore banking unit in GIFT City.

Billed as one of Prime Minister Narendra Modi’s pet projects when he was chief minister of Gujarat, GIFT City is projected as one of the first of the 100 smart cities the government plans to build across India. It is seen as India’s reply to the IFSCs in Dubai, Singapore and Hong Kong.

It is estimated that GIFT will provide 500,000 direct, and an equal number of indirect, jobs. It will have 62 million sq. ft of commercial, residential and social facilities, and require an investment of about ₹ 78,000 crore over the next 10 years.

An estimated ₹ 1,334 crore per day, or ₹ 2 trillion per year, of trades in rupee derivatives is taking place in locations outside India, according to a 6 February concept note prepared by the National Institute of Public Finance and Policy for the finance ministry that details the objectives and the policy framework for setting up SEZs for financial services in India.

Exchanges based in SEZs such as GIFT City can compete for global customers with DGCX in Dubai or SGX in Singapore, the report said.

In March, India’s stock market regulator approved guidelines for IFSCs that would allow Indian and foreign stock exchanges, clearing corporations and depositories to set up subsidiaries to undertake their business in such centres.

Earlier this month, India’s central bank allowed banks operating out of such centres to be able to fund mergers and acquisitions in dollars. They will also be able to allow customers to place bets on exchange and interest rate movements in addition to trading in dollar-denominated securities.

The capital requirement for this is $20 million (around ₹ 125 crore) and these businesses will also not be subject to reserve and priority sector lending requirements.

Reinsurance business worth ₹ 7,300 crore is currently going outside India, but could go to such centres located in the country, according to T.S. Vijayan, chief of India’s insurance regulatory agency.

IFSCs are seen as a significant contributor to a country’s gross domestic product (GDP). A case in point, according to financial services secretary Adhia, is Dubai, which set up an IFSC in 2004 that now contributes 12% to that country’s GDP.