Capital expenditure by the government is about the current generation creating assets for future generations: building infrastructure, from schools and hospitals to water canals and bus stations. The higher the capital expenditure, the greater the trickle-down effect on growth in the long run. The problem is Indian governments have very little fiscal room, directing only ₹ 1 for every they ₹ 4 spend on today’s expenses.

How much is the government investing?

Capital expenditure exceeded 20% of the total in just two of the last nine years. In other words, only one rupee out of every five went towards creating future assets; the other four went towards running expenses like paying salaries. The current National Democratic Alliance (NDA) government projected an expansion back to the 20% mark last year, budgeting about ₹ 3.18 trillion. This budget will tell us how it fared in that projection. 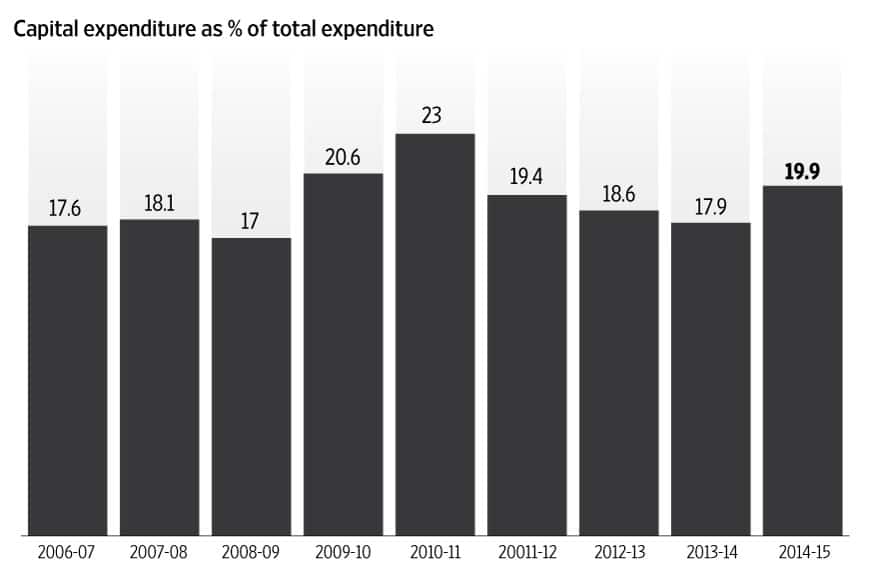 Is it investing what it budgeted?

It’s one thing to budget, it’s another to spend as intended. In three of the seven years till 2013-14, the government spent less than budgeted. It spent significantly more than budgeted in two years, which is also when it pierced the 20% mark. Where is it investing?

The share of transport and communication (which includes roads) has been shrinking. Meanwhile, the share of ‘other social services’—which include housing, labour welfare, employment and rural works—has increased. As has agriculture. How is it investing?

Increasingly, rather than directly spending, the central government is relying on states and local bodies.