Ahmedabad: The first stretch of an ambitious riverfront development in Ahmedabad is set to be thrown open to the public, and realtors are preparing to tap a business opportunity in it, amid discontent that thousands of poor residents displaced by the long-delayed project are yet to be resettled.

Sabarmati Riverfront Development Corp. Ltd (SRFDC), a special-purpose vehicle set up by the Ahmedabad Municipal Corporation 14 years ago to oversee the development, soon plans to open the 3.5km stretch, municipal commissioner Guruprasad Mohapatra said. This could be as early as a month, said architect and planner Bimal Patel, who is closely associated with the project. 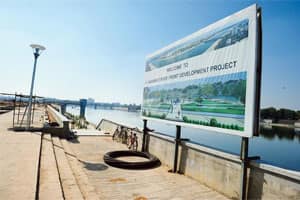 The cost of the project has escalated from ₹ 400 crore estimated in 1996 to ₹ 1,500 crore because of delays. The Ahmedabad municipality aims to raise the money by selling 14% of the total 200 hectares of reclaimed land.

Housing and Urban Development Corp. Ltd (Hudco) has lent ₹ 400 crore for the project that Patel, a key driver of the project, says is aimed at reclaiming the 11km “private" river edge and make it a “public" asset.

Some builders are seeing a real estate opportunity.

“The riverfront saga begins…" blares the slogan on a billboard that came up recently near the campus of the Indian Institute of Management, Ahmedabad (IIM-A), in the Vastrapur neighbourhood.

Posters showing dolphins diving in and out of the water and water sports being played are being displayed as part of a campaign by Ahmedabad-based developer JP Infrastructure Pvt. Ltd to promote its first residential project on the riverfront.

These hoardings came up after a Gujarat high court on 22 November directed the Ahmedabad civic body to provide basic amenities with transportation to displaced families while upholding its contention that rehabilitation efforts should not hold up the complete evacuation of the riverfront for the completion of the Sabarmati project.

According to the high court orders, at least 11,000 affected families were to be rehabiliated and resettled by the municipal corporation.

That hasn’t happened, but a demolition drive has been under way.

Close to 3,000 people have moved to the vicinity of Ganesh Nagar on the outskirts of Ahmedabad in the last two weeks. A local leader who did not want to be identified said around 2,000 of these people are those whose houses and hutments have been demolished in the riverfront area.

For instance, Deviben Vinod, a 50-year-old woman with seven children and an invalid husband, made a living by selling flowers in the Lal Darwaja area until the Ahmedabad Municipal Corporation demolished her one-room dwelling 15 days ago, forcing her to shift to Ganesh Nagar.

“We have made a temporary roof on our own from whatever little money we had," Vinod says. “The winter has started and we are offered open plots on a makeshift basis."

Eighty-year-old Gulabkhan Pathan, a rickshaw puller, who was displaced to the riverfront area during the 2002 riots, said he is again looking for shelter.

Rahamuddin Sayyed, whose name appeared in the first list of displaced people to be allotted new houses, said he is still waiting for a dwelling as the house meant for him had been given to somebody else.

This site is flanked by a large solid-waste processing facility, electricity towers and high-tension wires.

“The ongoing demolition drive is not violative of the high court direction," municipal commissioner Mohapatra said.

As many as 5,000 displaced families have already started using the new houses allotted to them, he said, and another 5,000 houses will be ready in the next two-three months.

Mohapatra said there have been several instances of illegal sale of houses by the displaced. Houses of 36 sq. m are being readied at various locations and the construction cost will be about ₹ 4 lakh each, he said.

The high court has appointed a committee headed by retired judge D.P. Buch in May 2010 to examine the claims of the hutment dwellers affected by the Sabarmati riverfront development.

From mid-February 2011 till 30 June 2011, the committee received as many as 7,500 applications from hutment dwellers who claimed their homes had been affected by the riverfront project and raised concerns about their resettlement and rehabilitation, says Beena Jadav, director and social researcher at not-for-profit Shelter, Gender and Human Rights Issues.

As many as 5,000 applicants have claimed before the Buch committee that their names have not appeared in any lists accepted by the court for providing alternative accommodation, said a person aware of the matter, who spoke on condition of anonymity.

“There has been little verifiable and consistent information about the riverfront project in the public sphere except for glossy brochures with pretty pictures, glamorous exhibitions showcasing the project for the international media..," says Navdeep Mathur, an IIM-A professor.

Mathur has been collaborating with academic researchers, students and communities affected by the riverfront project.

Not a single livelihood survey has been “carried out in the last 14 years to document all the different kinds of economically productive activity undertaken by vast numbers of mostly poor people", Mathur said.

Even architects, town planners and some property owners have expressed reservations over the project.

“It is a top-led model rather than inclusive and comprehensive model, and this is not quite appropriate for India, whose cities are composed largely of poor people," said Neelkanth Chhaya, dean of the faculty of architecture at CEPT University.

Rustom Cama, director of Cama Hotel located on the banks of the riverfront, points out that the river has been narrowed by about 30% and this has raised concerns of flooding.

Moreover, the Sabarmati is not a perennial river. Its flow depends on on the water released from the Narmada canal and rainfall in its catchment in the Aravalli hills in Rajasthan.

“Fortunately from the last four-five years, there has been no heavy rainfall, but there are many small rivers which join Sabarmati and we don’t know if the river can handle this," says Cama.

A community organization and several non-governmental organizations argued that 30,000-40,000 households will be affected by the project, and they filed a case in the Gujarat high court in 2005.

“The survey was inconsistently done, leaving out many households," says Desai. Also, while the 2000-02 survey enumerated some 14,500 households, there were several reports by the Ahmedabad Municipal Corporation and project consultants between 2000 and 2006 that cited this survey, but gave different numbers for project-affected households," said Desai, who is with the Centre for Urban Equity at CEPT University and has studied the riverfront project extensively.

IIM-A’s Mathur is more hopeful about the future as “a fresh perspective has been brought in by a new municipal commissioner, widely considered to be more balanced and committed to public service ethics, a welcome change from the past several years of trenchant hostility towards the poor by the local authority".