Washington: Scientists, using data from Nasa’s New Horizons spacecraft, have discovered what may be giant ice-spewing volcanoes on the surface of Pluto, providing an important new clue to the icy-dwarf planet’s geologic and atmospheric evolution.

New Horizons geologists have combined images of Pluto’s surface to make 3-D maps that indicate that two of Pluto’s most distinctive mountains could be cryovolcanoes — ice volcanoes that may have been active in the recent geological past. 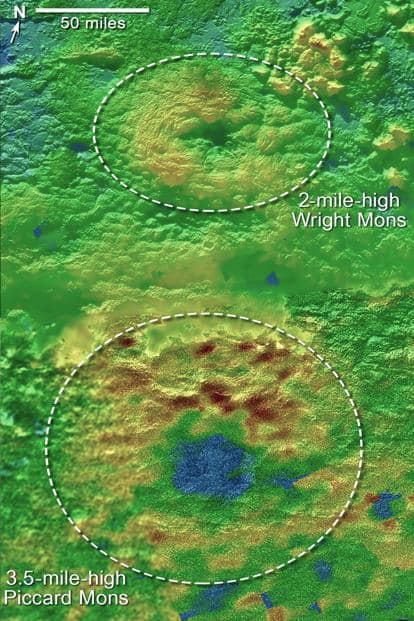 “These are big mountains with a large hole in their summit, and on Earth that generally means one thing — a volcano," said Oliver White, New Horizons postdoctoral researcher with Nasa’s Ames Research Centre in California.

While their appearance is similar to volcanoes on Earth that spew molten rock, ice volcanoes on Pluto are expected to emit a somewhat melted slurry of substances such as water ice, nitrogen, ammonia, or methane on Pluto. White stresses that the team’s interpretation of these features as volcanoes is tentative.

However, “If they are volcanic, then the summit depression would likely have formed via collapse as material is erupted from underneath," said White.

“The strange hummocky texture of the mountain flanks may represent volcanic flows of some sort that have travelled down from the summit region and onto the plains beyond, but why they are hummocky, and what they are made of, we don’t yet know," he said.

If Pluto is proven to have volcanoes, it will provide an important new clue to its geologic and atmospheric evolution, researchers said.

“After all, nothing like this has been seen in the deep outer solar system," said Jeffrey Moore, New Horizons Geology, Geophysics and Imaging team leader, also from Nasa Ames. From possible ice volcanoes to geologically diverse surfaces to oddly behaving moons that could have formed through mergers of smaller moons, Pluto system discoveries continue to surprise scientists on New Horizons mission team.

Another of the more surprising findings from New Horizons is the wide range of surface ages found on Pluto, from ancient to intermediate to relatively young in geological terms. Crater counts used to determine surface unit ages indicate that Pluto has ancient surface areas dating to just after the formation of the planets, about 4 billion years ago.

The New Horizons mission is also shedding new light on Pluto’s fascinating system of moons and their unusual properties. For example, nearly every other moon in the solar system, including Earth’s moon, is in synchronous rotation, but not so of Pluto’s small moons.