New Delhi: Projecting a moderate increase in growth rate for India to 7% in 2012-13, the Asian Development Bank (ADB) today said strong economic performance would depend on the country’s ability to push reforms agenda and address issues constraining investments.

The government, however, has projected a growth rate of 7.6% for the current fiscal and Reserve Bank of India (RBI) is slated to come out with its forecast the next week.

“An expected easing in monetary policy after a long period of persistent inflation and rate hikes might help stimulate investment over the coming year, but its impact is likely to be limited until obstacles like land purchase and environmental regulations, which are currently deterring both domestic and foreign investors, are addressed," said Changyong Rhee, ADB’s chief economist.

A number of bills and measures to improve India’s investment environment have been introduced in Parliament, but they are making little progress amidst lack of sufficient consensus for immediate reforms, said ADO.

It further pointed out that the recent rise in the pace of road construction and clearances for power projects is a positive signal, but, “more is needed to substantially increase levels of investment". 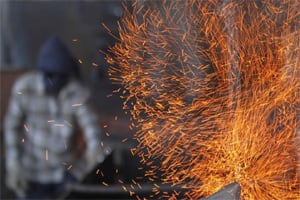 On inflation, ADB said, it eased late in the year, after 13 consecutive policy rate hikes by the RBI, but a sharp first-half pickup in exports was not sustained in the second, as global demand fell.

The dip in inflation is expected to continue on the expectation of normal monsoons and more stable global commodity prices, with the average rate expected to be 7% in 2012-13 and 6.5% the following year.

However the longer-term outlook for consumer prices will also depend on structural reforms to improve production and distribution of food, as India’s consumption patterns and incomes change.