Congress party to garner an average 37% vote share, according to estimates by a majority of exit polls

Bangalore: The Congress party is expected to win the assembly elections in Karnataka with an average 37% vote share, according to estimates by a majority of the exit polls.

Election to the 224-seat state assembly was held on Sunday. An estimated 69% of 43.5 million voters exercised their franchise.

There is a similar consensus among exit polls in terms of the vote share for other major parties, with the Janata Dal (Secular) (JD(S)) estimated to win 20-22% of the total votes and the ruling Bharatiya Janata Party (BJP) 23-27% of the share.

Former chief minister B.S. Yeddyurappa’s Karnataka Janata Paksha (KJP), formed after he quit the BJP in 2012, is expected to win about 7% of the votes, hurting the chances of the BJP to return to power in the only southern state the party has ever ruled. 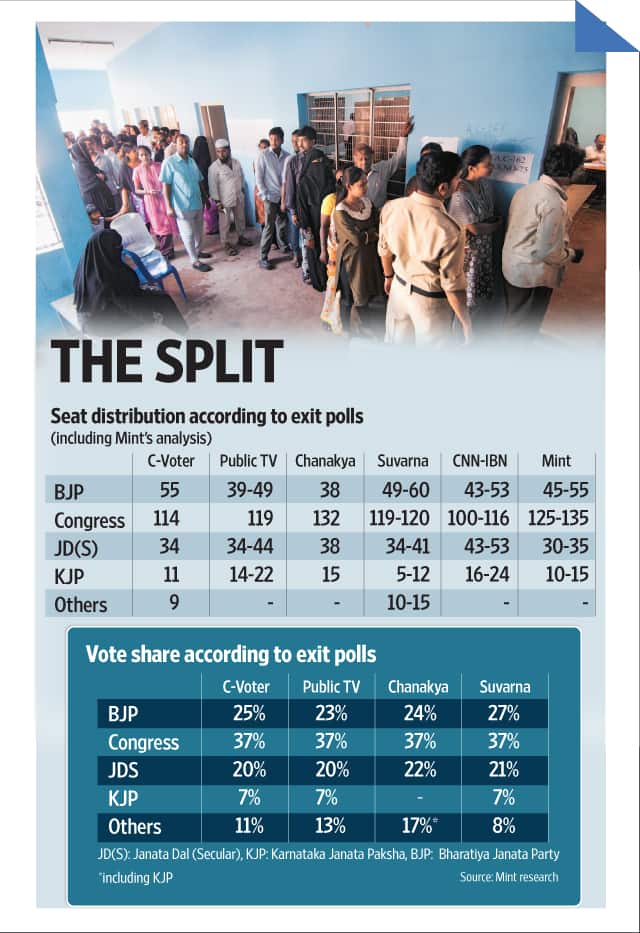 Despite the broad consensus in terms of vote share, different polling agencies have come up with vastly different projections in terms of seat distribution. While the CNN-IBN exit poll predicts 100-116 seats for the Congress, indicating the party might struggle to win a majority in the assembly, Today’s Chanakya, an opinion poll from RNB Research, estimates a majority for the party with 132 seats.

Plugging in the consensus vote share numbers into our own model, the Congress is expected to get a comfortable majority with at least 125 seats.

The swing against the BJP, combined with the split because of the KJP, means the party will be reduced to around 55 seats in the assembly. The JD (S), we expect, will slightly improve its tally to about 35 seats. While the KJP may not gain too much in terms of seats (most polls expect it to get somewhere in the low teens), the impact of the party can be seen in the vastly reduced tally for the BJP.

Finally, a note on sampling. The Suvarna News poll interviewed about 10,000 respondents across 200 constituencies —about 50 voters per constituency. Daksh, a not-for-profit initiative, conducted a survey rating Karnataka members of the legislative assembly in December, again polling about 50 voters in each constituency.

The problem with such sampling is that the sample size in each constituency is too thin. More incremental information might be derived from making the polling deeper—polling more voters in fewer constituencies.

From now until the end of the 2014 general election, Mint will carry, at frequent intervals, data-driven articles on elections and electorates.