Bihar poised to return to politics of caste, religion

In the next Lok Sabha election, the Bihar electorate—like in the past—will be polarized along of caste and religion

Darbhanga/Samastipur: In the last assembly elections in 2010, Mohammad Ajmad Ansari, a 35-year-old teacher from Saramohanpur village in Darbhanga, voted for the Janata Dal (United), or JD(U), which was in alliance with the Bharatiya Janata Party (BJP), because it stood for “good governance". Even after the alliance broke up in June, he says he will continue to vote for the JD(U), but for different reasons.

Bihar chief minister Nitish Kumar precipitated the split within days of Narendra Modi being elevated head of the BJP’s campaign committee for the 2014 general election. Kumar has been a critic of Modi, the Gujarat chief minister, over his handling of the 2002 communal riots in the western Indian state.

“While I am not happy that the alliance split, Nitish Kumar’s reason was valid," said Ansari. “All doubts are cleared now. Everyone knows Narendra Modi by Gujarat riots and by this decision, Nitish has shown that he is not aligned with such forces. We will vote for someone who stands by our community."

Nearly 30 kilometres away in Panchom village, Santosh Chaudhary, a 42-year-old farmer, feels even more strongly about the split.

“Unlike others, I feel this split should have happened much earlier and the BJP should have opted out of it," Chaudhary said. “Only the Mahadalits have benefited from Nitish’s rule, this time around upper castes like us would stand strongly behind BJP." The so-called Mahadalits are the poorest of the Dalits.

Ansari and Chaudhary are in many ways etching the new political narrative of Bihar, wherein the split in the alliance has created three political power centres around the JD(U), the BJP and the Rashtriya Janata Dal (RJD) led by Lalu Prasad.

Unlike in the last assembly polls, where development was central to the electoral agenda, in the next Lok Sabha election, the Bihar electorate, like it always did in the past, will be polarized along the lines defined by caste and religion. 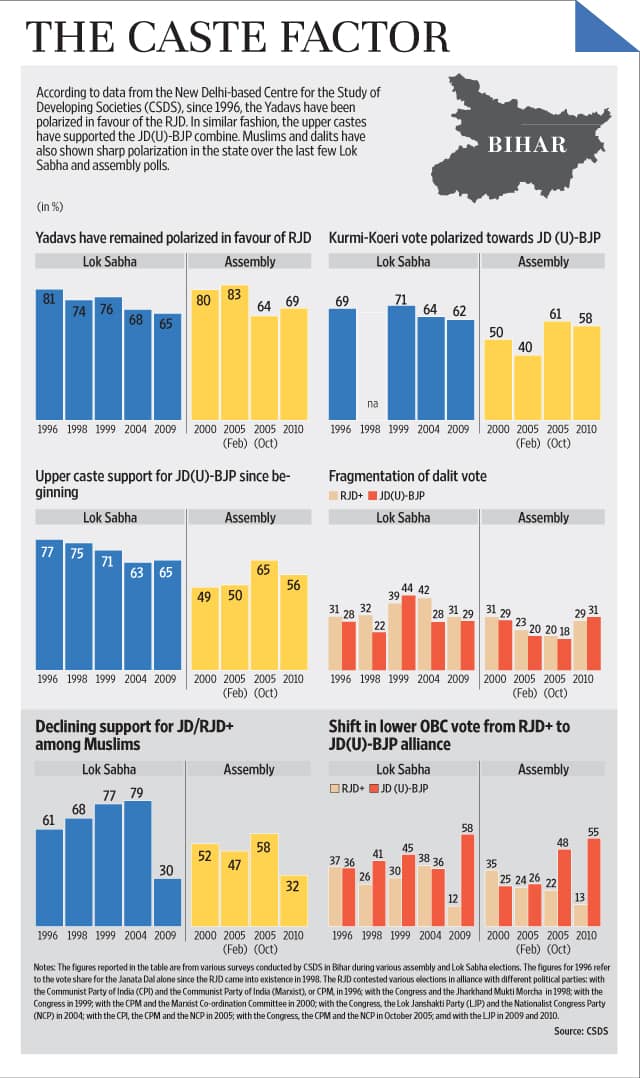 While the BJP has a strong support base among the upper castes and urban voters, the JD(U) has successfully cultivated an alliance of the Mahadalits, the Pasmanda Muslims, the extremely backward castes and non-Yadav other backward classes (OBCs).

One without the other would mean scrambling to woo non-traditional support bases and that too over the months before Lok Sabha elections take place.

“The BJP and the JD(U) had totally different support bases, both ideologically and on the ground. There were too many castes in a single group. For instance, the Kurmis and the Brahmins were forced to be in the same group because they belonged to the ruling bloc. However, post the split, they are now opposed to each other, making way for sharper polarization," said Sanjay Kumar, a political analyst and fellow at New Delhi-based Centre for the Study of Developing Societies (CSDS).

“The caste polarization following the split will be sharper. Political rivalry always gives way to heightened caste rivalries," he said. “As far as caste is concerned, this time the big fight among all political parties would be to mobilize the lower OBC voters because the rest are already polarized."

Similar battle lines are being drawn communally too in a state where 16.5% of the population was made up of Muslims, according to the 2001 Census data, compared with the national average of 13.4%. A more recent breakup isn’t available.

Mohammed Mehfuz Ali, a 40-year-old teacher from Sharfuddinpur, says that by ending the alliance on the choice of Modi as the BJP’s campaign chief, Kumar has sent the “right signals" to the Muslim community—a key electoral vote bank.

“For us, the BJP we supported was the one that was led by Vajpayee," he said, referring to former prime minister Atal Bihari Vajpayee. “Narendra Modi gives provocative speeches against us, how can we align with a party that projects him as their prime ministerial candidate?"

Mukhtar Ahmed, a 48-year-old farmer in the same village, argued similarly. “BJP used to get Muslim votes in Bihar because of JD(U), but we don’t see that happening now that they have split ways. Kumar did the right thing by breaking the alliance when he saw Modi growing too big," he said.

Experts say that it is too early to make a surmise that the Muslim vote will consolidate behind Kumar.

“Right now every Muslim would say that he or she favours the reason for Kumar’s split. However, when elections are nearing such a sharply polarized dominant opinion may not get translated in votes and other factors may seep in," Kumar of CSDS said.

Young Muslims—another important subset within the larger Muslim vote bank—have their own concern: the lack of government jobs.

“Unemployment is a major issue in the state. The chief minister may have positioned himself as a secular person, but that does not mean that the Muslims would blindly vote for him," said Syedain Ashraf, a 23-year-old graduate student from Darbhanga. “Let us not forget that we felt equally safe even during Lalu Yadav’s tenure. If (Modi) being communal was Kumar’s greatest concern, why did he wait for so long to quit the BJP?"

While under the alliance’s rule Bihar’s economic growth rate spiked to nearly 12%, issues such as poverty, unemployment and lack of inclusiveness are yet to be tackled. According to a report in June by Crisil Inclusix, an index to measure the progress of financial inclusion across the country, Bihar was one of the bottom five states in terms of delivering financial services.

“To sustain a growth rate of nearly 12% would be very difficult for Nitish Kumar. There is hardly any resource base and the state’s revenue is also low. While fiscal consolidation has happened over the last few year, the vicious cycle of poverty continues to exist," said Alakh N. Sharma, director of New Delhi-based Institute for Human Development, who has been working on the political economy of Bihar for the last three decades.

“Bihar’s per capita income is one-third of national per capita income—even if Kumar maintains a growth rate of 12% and India grows at 6%, it would take the state nearly 20 years to reach there," he said.

“The mandate was common and it was wrong on Nitish’s part to fracture it midway. I believe Nitish’s story is over from here," said Akhilesh Kumar Gupta, a 32-year-old cloth merchant from Painathi village near Bihta. He travels to surrounding villages on his bicycle.

Places like Bihta could prove to be a litmus test for measuring the development claims of the government, given its geographical proximity to the state capital of Patna, which is less than 20 kilometres away.

Many feel that in constituencies like this, a lot will depend on the candidates fielded, their background and the caste calculations involved.

A favourable sentiment for the JD(U) may help it in constituencies where the fight was close in 2010. One such constituency is Bahadurpur, where the RJD candidate lost out to the JD(U) candidate by a margin of just 643 votes.

“In the last election, the margin here was very low. So, in a constituency like ours, a lot will depend on the kind of candidates that the parties are fielding," Vishwanath Paswan, a small trader from Harichanda village in Bahadurpur, said. “We would support someone who pays attention to the problems that people from our caste are facing here."

V. Krishna Ananth, a political analyst and author of India Since Independence: Making Sense of Indian Politics, said Nitish Kumar’s main rival is the RJD, which targets a similar vote bank, and not the BJP.

“There is a churning in Bihar that has taken place because of the changes in the economy. Concerns of caste can never be ruled out, but it may be relevant only in the case from candidate to candidate," Ananth, who is currently based out of Sikkim, said.

In the final analysis, it is clear that Bihar is poised to return to its classic electoral battles fought over caste and religion. Ironic, coming at a time when the state economy seems nicely poised to launch the next phase of its economic growth.

This is the second part in a series on Bihar.