"storyDirectUrl"
OPEN APP
Home / Industry / Infrastructure /  Govt unveils list of 98 smart cities; UP and TN get the most

Govt unveils list of 98 smart cities; UP and TN get the most

Four cities with a population of above 5 million have been selected for the projectChennai, greater Hyderabad, Ahmedabad and greater Mumbai

New Delhi: The government on Thursday released a list of 98 cities selected for the smart cities project aimed at kick-starting the next wave of planned urbanisation in India.

“The work on smart cities mission that started about a year ago reached a major landmark today (Thursday) with official announcement of the smart city nominees. I am happy to release the names of 98 smart city aspirants that were chosen by the states and Union territories after the first stage of competition," said minister for urban development and parliamentary affairs M. Venkaiah Naidu.

Experts welcomed the rollout of the project, but cautioned that the key will be in implementation.

“Selection of smart cities is the first step. The major challenge is to provide quality urban services such as 24x7 water supply, sanitation, drainage, solid waste management, sewage treatment. Looking at the finances of urban local bodies, which are far from healthy, the provision of these services will be challenging. Levying of user charges to recover the cost of provision of these services will be crucial to maintain the quality of these services. In the process of smart cities, the focus should not divert from providing urban services in other cities and make them more liveable," Devendra Kumar Pant, chief economist, India Ratings and Research, said.

Census 2011 revealed that the country had seen a sharp rise in urbanization, especially in the so-called census towns—rural areas that mimic urban behaviour. India’s urban population grew from 286 million in 2001 to 377 million in 2011. A big concern was that this growth was happening in a haphazard manner. At present, nearly a third of India’s population is estimated to live in urban areas, including so-called census towns. This is projected to grow to 50% by 2050. The National Democratic Alliance (NDA) released the guidelines and mission statement for the 100 smart cities project in June. The mission, a flagship programme of the NDA, has been allotted a budget of ₹ 48,000 crore for five years. Focus areas of the mission include provision of clean water supply, sanitation and solid waste management, efficient mobility and public transport, affordable housing and governance.

Each state has been given a fixed number of cities to nominate. These numbers were arrived at following a criteria giving equal weightage to the urban population of the state and the number of statutory cities/towns in that state.

Jammu & Kashmir and Uttar Pradesh are yet to come up with one nomination each from the number of smart cities allotted them.

“The government of Jammu and Kashmir sought more time to firm up its choice. More information is sought from the Uttar Pradesh government about the 13 smart cities that are yet to be announced," said Naidu.

The cities nominated by Uttar Pradesh, that had been allotted the largest number of 13 cities, include Lucknow, Varanasi, Kanpur, Ghaziabad and Allahabad. Poll-bound Bihar, allotted three cities, has selected Muzaffarpur, Bhagalpur and Biharsharif.

Eight nominated cities have a population of 100,000 or less. These include Panaji, Silvassa, Dharamsala and New Town Kolkata.

Arindam Guha, senior director at Deloitte, said, “The implementation challenges for the cities with a population below 1 lakh would be somewhat different from the large cities. While complexity would be higher in the large cities, the main constraint for the smaller cities is likely to be that of technical capacity in areas like urban planning, financial management, engineering, procurement and programme management. It is here that state governments may need to think of some common support mechanism for fast-tracking implementation."

Four cities—Chennai, greater Hyderabad, Ahmedabad and greater Mumbai—have a population of over 5 million.

Commenting on the non-inclusion of capital cities, including Patna, Shimla, Bengaluru and Kolkata, Naidu said, “In one sense, this non-inclusion goes to prove that the selection in the first stage of the competition was not swayed by the status or importance of the cities and the selection was objective and as per the stipulated criteria."

With the first stage completed, the cities will be evaluated on the basis of six criteria, including credibility of implementation, city vision and strategy, and economic and environmental impacts of the plan. On the basis of this, 20 cities will be selected in the first year and 40 each in the next two years.

The central government will provide ₹ 200 crore in the first year to each selected city and ₹ 100 crore subsequently each year. Plans will be implemented by a special purpose vehicle set up for each city.

Madhurima Nandy in Bengaluru contributed to this story. 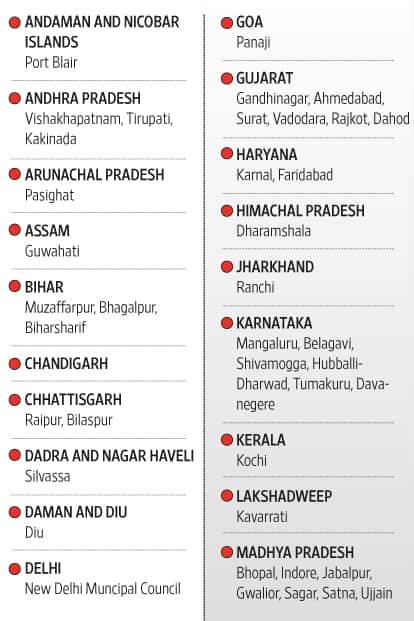 Expand
Expand
Subscribe to Mint Newsletters
* Enter a valid email
* Thank you for subscribing to our newsletter.