Why risks to inflation in India are on the rise

The sharp drop in prices of farm products over the past few months has not just upset farmers across the country, but also seems to have complicated the task of India’s monetary authorities. The minutes of the last meeting of the Monetary Policy Committee (MPC) of the Reserve Bank of India (RBI) show that the committee is divided on the issue of inflation outlook, in general, and food inflation, in particular.

While inflation data has been consistently below RBI’s forecasts over the past few months, there is a growing risk that this trend may not continue in the coming months. Three factors, in particular, pose a risk to inflation in India: low price expectations of farmers which can affect cropping decisions, the frenzy around cow protection which can wreak havoc on India’s cattle economy, and the introduction of the new goods and services tax (GST), which if not managed well, can contribute to inflation.

To put the current drop in inflation in the right perspective, it may be useful to compare it with historical trends, using the old wholesale price index (WPI) series which provides a consistent time-series from the 1980s.

The data clearly shows that food inflation has been the key driver of inflation in the past inflationary spirals. An analysis of the four major food groups—food grains, fruits and vegetables, milk, and animal products other than milk (including meat, eggs, and fish)—which together constitute 97% of the food component in the WPI series shows that sustained rise in the prices of milk and other animal products was the major driver of food inflation since the turn of the 21st century. Food grains had a much bigger role to play in the high inflation phase of the 1990s. Inflation in food grain prices has been relatively stable over the past two decades.

This suggests that if left unchecked, the current frenzy around cow protection can wreak havoc on the market for animal products, and take a heavy inflationary toll on the economy. Inability to sell their unproductive cattle will adversely affect dairy farmers, who have begun complaining about the restrictions on cattle sales. This would lead to an increase in milk prices. Reduction in supply of bovine meat can also push up prices of other meat products.

Already, shares of Venky’s (India) Ltd, a leading producer of processed poultry products, have soared in anticipation of higher margins in the future, and this rise may continue if the hysteria around cow protection sustains, according to market-watchers.

The key driver of disinflation over the recent past has been the sustained drop in prices of pulses and fruits and vegetables. However, this trend may not sustain.

Over the past few years, Indian farmers have become much more price-sensitive than before. Their cropping decisions for the year ahead are therefore based at least in part on current prices. So, when prices rise for a given crop, next year’s cultivation increases and vice-versa. This effect, called the cobweb effect in economics, has become increasingly prominent in India. Food grains are an exception, because of the stabilising impact of public procurement policies. This suggests that the sharp decline in prices of pulses and horticultural products may lead to a supply crunch in the next season. 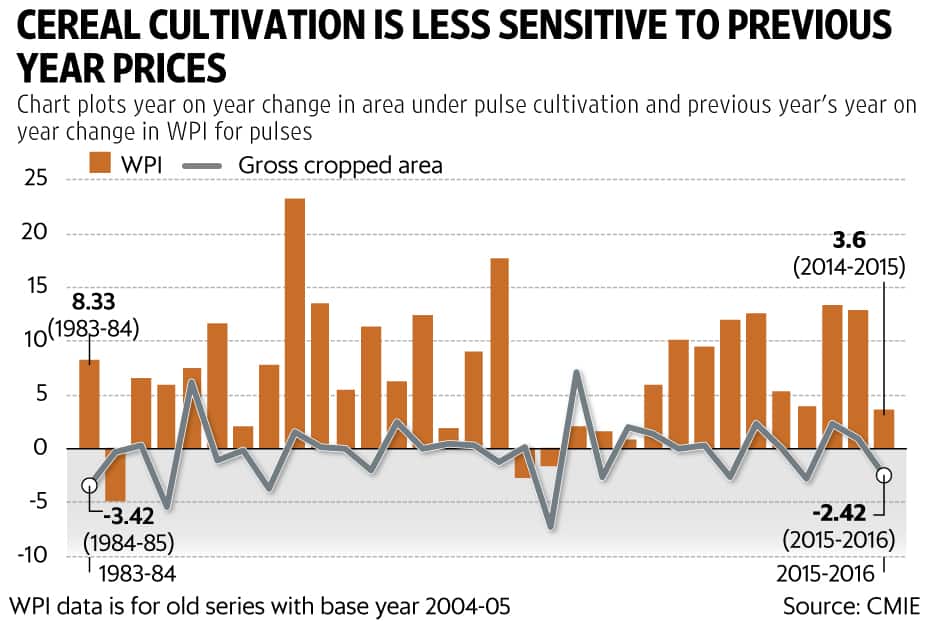 This may already be happening in Maharashtra, with farmers reverting to cultivation of cotton after suffering losses in pulses this year. Such trends may lead to a rise in prices of several farm products in the coming months. An analysis of prices and cropping decisions by Ajit Karnik, an economist at the University of Mumbai, suggests that we may expect prices of pulses in particular to rise sharply.

Implementation of GST is another key risk factor. Part of the crash in food prices could be because of pre-GST liquidation of stocks to reduce tax liability, Mint reported last week. This effect will dissipate now.

Also, some economists fear that lack of preparedness on the part of the government may lead to an inflationary spike similar in nature to the one witnessed after the adoption of VAT (value-added tax) in 2005.

In a recent Economic and Political Weekly article, economists Sthanu R. Nair and Leena Mary Eapen from IIM Kozhiikode argued that unlike countries such as Australia which set up a well-equipped anti-profiteering machinery a year in advance in preparation of GST, India’s attempts in this regard appear clumsy and inadequate.

Given the rising uncertainties, the outlook for inflation does not appear as rosy as before.