The current account deficit rose to $3.4 billion, or 0.6% of gross domestic product in the fourth quarter of fiscal 2017, from $0.3 billion a year ago, showed RBI data

Mumbai: India’s current account deficit narrowed to 0.6% of gross domestic product (GDP) in the fourth quarter of 2016-17 against 1.4% in the preceding quarter as trade deficit narrowed, according to data released by the Reserve Bank of India (RBI).

Separately, commerce ministry data showed India’s trade deficit expanded in May to $13.8 billion as exports growth decelerated to single digit (8.32% to $24 billion) after growing in double digits for three consecutive months while imports expanded 33.1% to $37.8 billion due to a significant jump in gold imports (236.7% to $5 billion). 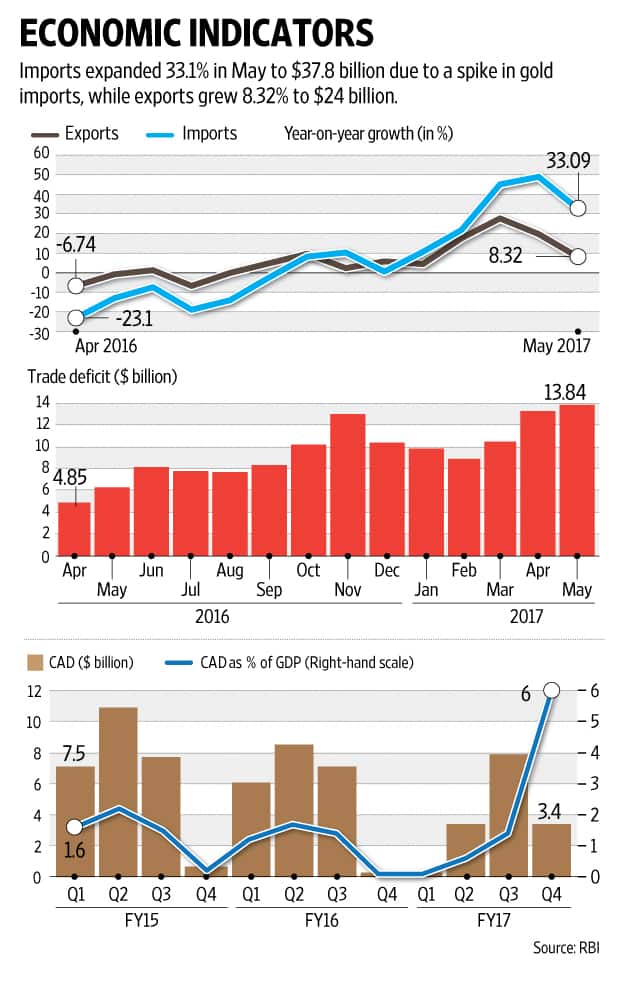 Federation of Indian Export Organizations (FIEO) president Ganesh Kumar Gupta said the continuous growth in gold and electronics imports and the decline in pharma exports is a cause for concern which needs to be studied and addressed quickly.

Aditi Nayar, principal economist at Icra Ltd, said she expects a widening of CAD to $27-32 billion, or 1.1% of GDP in FY18. “Notably, volatility in commodity prices could significantly influence the pace of growth of import and export values. Our baseline expectation is that the merchandise trade deficit would widen to around $122-127 billion in FY18 from $112 billion in 2017. The services trade surplus and remittances are unlikely to improve significantly from the levels in FY17, particularly given the headwinds faced by the information technology sector," she said.

Workers’ remittances by overseas Indians, after picking up in Q2 at $9 billion, declined for the second consecutive quarter to $8.4 billion. Subdued income conditions in the Gulf region due to the downward spiral in oil prices have kept growth in remittances muted.