Indian economy back on growth track

GDP grows at 5.7% in June quarter, best in 10 quarters as manufacturing expands at 3.5% while construction gains 4.8%

New Delhi: In the first clear sign that the Indian economy is on the mend after two years of sluggish growth, data released on Friday showed economic growth bounced back strongly to hit 5.7% in the first quarter of the current fiscal year, the highest in 10 quarters, that was driven by strong industrial recovery.

Gross domestic product (GDP), the broadest measure of goods and services produced across the economy, grew at 5.7% in the three months ended 30 June against 4.6% in the March quarter.

The US economy also grew at a higher-than-expected rate of 4.2% in the June quarter, compared with a contraction of 2.1% in the March quarter, driven by more business spending on new equipment and stronger household spending.

The 5.7% growth figure released on Friday was the highest since January-March 2011-12, when the economy grew by 6%. 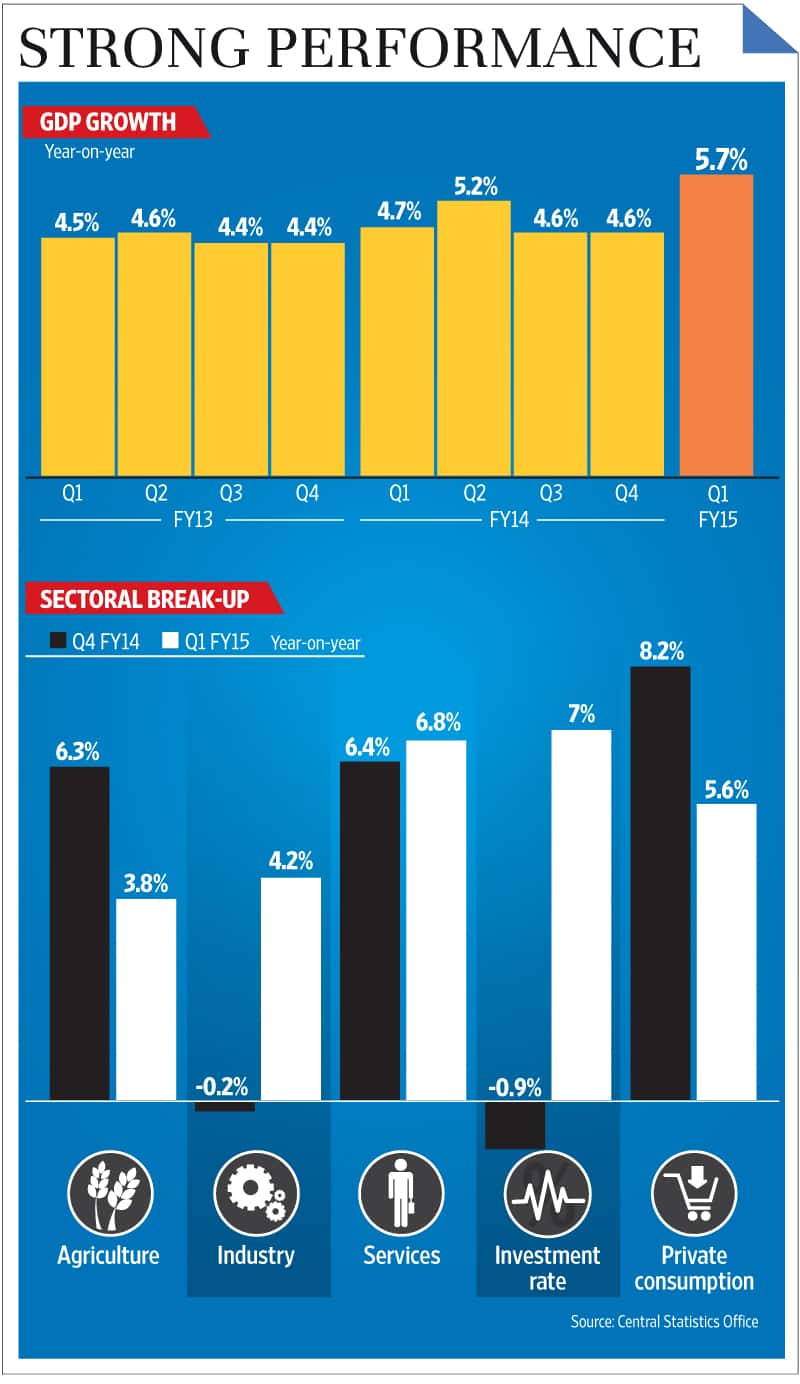 With Prime Minister Narendra Modi’s government having taken charge only on 26 May, the good news may be less on account of policy measures and more the result of a positive response by business and industry to a slew of opinion polls that had projected a stable government and a clear majority for the National Democratic Alliance.

Modi led the Bharatiya Janata Party to a spectacular win in the April-May general election, promising to boost economic growth that has languished at sub-5% levels for two years on the trot.

The new government announced measures to boost manufacturing and foreign direct investment, including in defence manufacturing, railways and insurance. In his maiden budget, finance minister Arun Jaitley hiked spending on infrastructure and announced incentives for manufacturers.

The government data showed that manufacturing expanded at 3.5%, bouncing back from a contraction of 1.4% during the preceding March quarter, with electricity generation growing 10.2% compared with 7.2% during the same period. Construction activity, too, showed signs of revival, growing at 4.8% during the June quarter compared with 0.7% in the March quarter of the previous fiscal year.

However, farm output slowed down due to the erratic monsoon, to 3.8% in the June quarter, compared with 6.3% in the March quarter.

Among services, there was a slowdown in trade, hotels, communication and financial services. But community and social services, a mark of central and state government expenditure, picked up significantly.

The slowdown in the trade, hotels, transport and communication sectors is surprising, given the recent recovery seen in high-frequency indicators for tourism, air passenger traffic, air and sea cargo and rail freight, according to Shubhada Rao, chief economist at Yes Bank Ltd.

On the expenditure side, the economic recovery was led by a sharp revival in investment demand. Growth in investment surged to a two-year high at 7% against a contraction of 0.9% in the March quarter. On the other hand, although growth in private consumption eased to 5.6% in the June quarter from 8.2% in the March quarter, it continued to remain above 2013-14 average consumption growth of 4.7%.

However, economists cautioned that economic revival will be gradual.

Although a lower base last year makes the GDP numbers look better than they are, there is no denying that the health of the economy is improving in response to mildly positive steps being taken by the government, Crisil Ltd’s chief economist D.K. Joshi said. “Going ahead, agriculture will slow down significantly due to poor monsoon, while improved prospects of industry and services can deliver 5.5% growth," he said.

Half of the country by area has received deficient or scanty rainfall in the southwest monsoon season so far this year, and some experts fear 2014 may be India’s first drought year since 2009. Overall, rainfall has fallen 18-20% short of the long-period average so far in the June-September monsoon, which waters most of India’s crops.

“Although sowing has picked up pace in the last four weeks, it continues to remain below last year’s levels. We expect the bulk of monsoon impact to come over the next two quarters, though rabi production could cushion the downside," Rao of Yes Bank said.

Rating agency Moody’s on Wednesday said the Indian economy is in the early stages of a slow cyclical upturn. Investor sentiment has improved significantly since the new government took office under Prime Minister Modi.

The Reserve Bank of India, in its monetary policy statement on 5 August, said prospects for reinvigorating growth have improved modestly.

“The firming up of export growth should support manufacturing and service sector activity," the central bank said. “If the recent pickup in industrial activity is sustained in an environment conducive to the revival of investment and unlocking of stalled projects, with ongoing fiscal consolidation releasing resources for private enterprise, external demand picking up and international crude prices stabilizing, the central estimate of real GDP growth of 5.5% within a likely range of 5% to 6% that was set out in the April projection for 2014-15 can be sustained."

However, it cautioned that if risks relating to the global recovery, the monsoon and geo-political tensions intensify, the balance of risks could tilt to the downside.

Data released separately by the Controller General of Accounts showed that lower Plan and non-Plan expenditure helped the central government keep its fiscal deficit under check in the first four months of the current fiscal year. Fiscal deficit during the April-July period narrowed to 61.2% of the ₹ 5.3 trillion annual target compared with 62.8% during the same period a year ago.

Aditi Nayar, senior economist at rating agency Icra Ltd, said at an absolute level, the fiscal deficit in April-July is five percentage points narrower than the level in the first four months of 2013-14.

“This partly reflects an 11% contraction in non-interest expenditure, which is a cause for concern," Nayar said. “In particular, Plan expenditure in April-July 2014 was 12% lower than the year-ago period, highlighting that productive expenditure is yet to pick up."

Net tax revenue displayed marginal growth in April-July at 15%, indicating that the achievement of the budgeted growth target of 20% for 2014-15 remains challenging.

“However, the positive growth displayed by corporation tax and excise collections for the month of July 2014, subsequent to the year-on-year contraction in June 2014, is encouraging," Nayar added.