New Delhi: Lack of creche facilities, rigid work hours, and barriers to transitioning back into work after the birth of a child are few of the reasons behind the high attrition rate of women lawyers with children, according to a new report.

While women and men have been graduating from top law schools at roughly equal rates for the past decade, few women can be seen in senior legal positions: Of the 397 lawyers designated as “senior advocates" in the Supreme Court since 1962, only five are women.

In addition, only 55 of the 241 advocates-on-record are women, according to the report released on Tuesday by Rainmaker, a research organization focused on the legal profession. “The assumption that the workplace is a gender neutral place is flawed. While women pointed family responsibilities as being a barrier in career advancement, the real barrier is the absence of policies at the workplace that address the needs and requirements of working fathers and mothers," said Swagata Raha, who co-authored the report with Sonal Makhija. 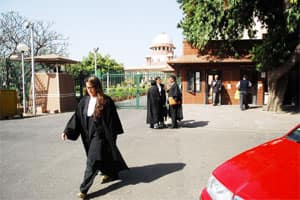 Gender discrimination is perhaps felt most keenly by working mothers.

According to the Rainmaker report, half of the respondents were questioned about their marital status during job interviews, and 62% were questioned about their children. About 85% said that marriage and maternity policies were barriers at work. Of those working in litigation, seven said they were compelled to take a break from work because of the absence of child care facilities or creches.

“It is very difficult for women in litigation because they don’t have the same formal support structure that is extended by employers at a law firm or a company," said Raha. “Nearly all those who remained had either a supportive spouse, or child care at home. Most took a long break and when they did come back, their visibility in the court room was less—so it definitely impacted their earnings."

Other women with children preferred to stay in litigation because of flexible work hours, and the option of working part time while their children were small—a perk absent from jobs in many law firms and companies. “The option to work reduced hours can help women tide over the initial pressures that arise after the expiry of maternity leave," the report observes. “It can also help prevent, to some extent, the exit of women who do not have or cannot afford external child support."

The study advocates that organizations adopt a written policy on parental leave, provide paid maternity leave for six months and paid paternity leave for one month, provide workers with flexible options such as work from home or reduced hours for new parents, and most importantly—creche or child care facilities. “We asked women if motherhood has had an adverse impact on their career, and the majority said yes," said Raha. “But we think it’s unfair to say that motherhood has an adverse affect on their career—it is the work space that is premised on the “ideal male worker"—that is the problem. The ideal worker should be able to work long hours and be available, whenever required. The assumption here is that someone else is taking care of the home and children, and that’s the wife."