Modi's approval rating is 79%, higher than the 74% it was in May, according to a Mint-Instavaani survey

Bengaluru: The monsoon session of Parliament has been a washout, three senior Bharatiya Janata Party leaders are facing allegations of corruption and impropriety, and business executives are becoming volubly impatient with what they perceive to be a slow pace of economic reform—but Narendra Modi remains a popular Prime Minister.

Indeed, his approval rating (or proportion of people who approve of the job he is doing as Prime Minister) is 79%, higher than the 74% it was in May, when his government completed a year in office, but lower than the 82% it was in August last year.

The numbers are based on a survey conducted by Mint in association with instaVaani in the days before Modi delivers his second Independence Day speech on Saturday. 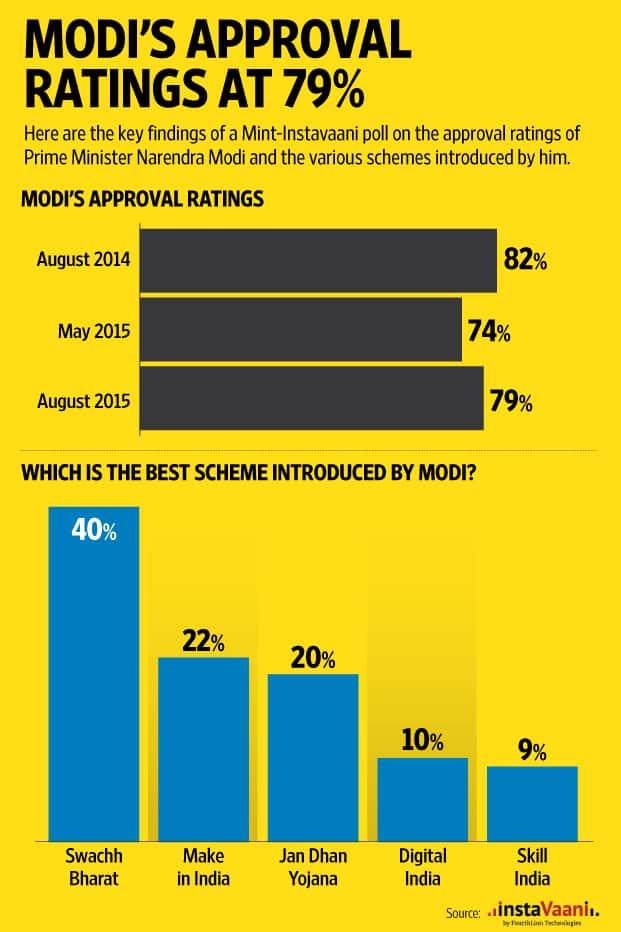 Has Modi’s popularity indeed increased since the last survey was done?

Probably not by much, given sampling biases and selection biases (a number of respondents hung up before the survey could be completed, and a rather large number refused to answer this question).

Of the 8,938 respondents who gave a definitive answer to this question (the rest either ignored the question or gave an invalid answer), an overwhelming 79% (7,040 respondents) indicated their approval of the Prime Minister. The phone survey was conducted over the past three days.

More respondents (11,172) answered the question on the government’s performance, and 76% (8,517) of the responses were positive. The approval rating of the NDA, then, is very similar to Modi’s. This is the first time this question was asked.

Interestingly, only 6,428 respondents gave a definitive answer to both the above questions—this is due to some respondents hanging up after answering the first question (on the PM’s approval) and some others not answering the first question (the survey is done through interactive voice response, or IVR, and people being surveyed have to press a key to register their responses).

We can test for this bias by looking at the answers to the second question by those who did not give a definitive answer to the first.

In this case, however, we find that about 80% of people who did not give a definite answer to the fist question but gave one for the second approved of the government’s performance.

With this, the number not being too far from the 76% overall rating for Modi’s government, we can rule out any biases in their not answering the first question.

A full 50% of naysayers, on the other hand, pick the same scheme as their favourite. In other words, it appears that the best way for the Prime Minister to win bipartisan support is to execute on the Swachh Bharat Abhiyaan, although that is easier said than done!

There is a lot to look forward to in the Prime Minister’s speech on Saturday, which, the survey tells us about 80% of the people plan to listen to.