Narendra Modi checks in with his new-look team

New Delhi: Narendra Modi was sworn in on Monday as India’s 14th Prime Minister, bringing to its logical conclusion a spectacular political campaign that saw him lead the Bharatiya Janata Party (BJP) to a parliamentary majority—the first for any single party other than the Congress—in the April-May general election.

If the composition of the cabinet is any indication, the new regime will run a very powerful Prime Minister’s Office, something that was last witnessed during the tenure of the late Indira Gandhi.

Reflecting the poor bench strength of the BJP, the cabinet blends youth with experience. Most importantly the key economic portfolios of petroleum, power and coal, commerce and finance, all of which need urgent attention to facilitate an economic revival, are being headed by ministers considered close to Modi.

Arun Jaitley has emerged the de facto No.2, with the portfolios of both defence and finance, although there has been some speculation that he could eventually retain only one.

The 45-member council of ministers seems to be a work in progress—it is yet to include representation from states such as Rajasthan, where the BJP swept all 25 seats. There is no word as to when the government will embark on the next cabinet expansion. 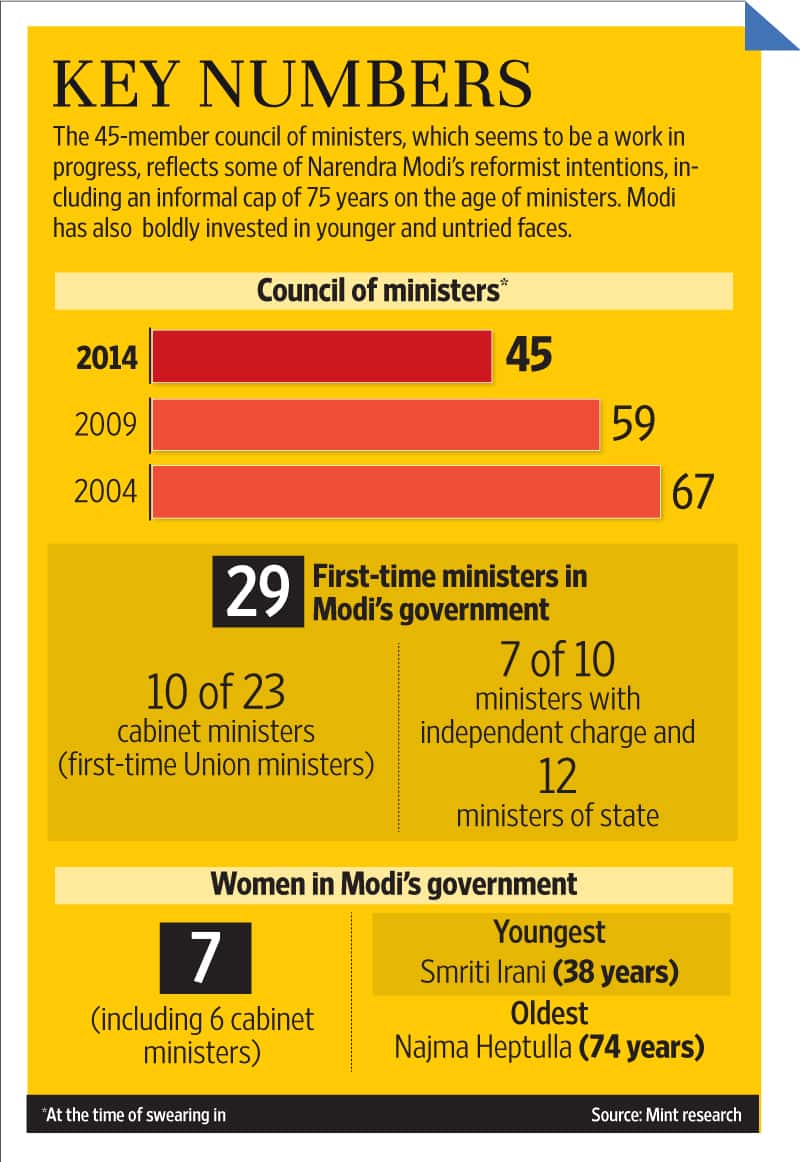 The cabinet wasn’t as revolutionary as promised. Gujarat Bhawan, the interim office of Modi, issued a press release late on Sunday night claiming that the government would be lean and also be restructured into clusters such as energy and transport ministries, reflecting the new realities and challenges of India.

Sure, Piyush Goyal was put in charge of both the coal and power ministries, and Nitin Gadkari, surface transport and shipping, but some of other combinations weren’t as logical, suggesting that there could be some reallocation after the cabinet is expanded.

Interestingly, there was no official word on the portfolios, although Mint was able to independently verify most of them with people in the BJP and corroborate them with media reports.

The size of the council of ministers was not substantially smaller. In the United Progressive Alliance’s (UPA’s) first term in 2004, Manmohan Singh was sworn in along with 67 ministers; in 2009, he did so with 59.

Still, the cabinet reflects some of Modi’s reformist intentions. For one, he has placed an informal cap of 75 years on the age of ministers. He has also boldly invested in younger and untried faces, albeit those who have performed in the party.

Unlike the Congress, which has had six decades in government, the BJP is hard-pressed to raise its bench strength all of a sudden. Given this handicap, Modi seems to have settled for a plan to groom young ministers—once again suggesting that India’s new prime minister is looking at a minimum of two terms in office.

Although the BJP has a simple majority in the Lok Sabha, Modi has given cabinet berths to one leader each from his pre-poll alliance partners. Ram Vilas Paswan (Lok Janshakti Party), Harsimrat Kaur Badal (Shiromani Akali Dal), Anant Geete (Shiv Sena) and Ashok Gajapathi Raju (Telugu Desam Party) were sworn in along with Modi.

Party spokespersons Nirmala Sitharaman and Prakash Javadekar as well as the BJP’s regulars on TV channels, Piyush Goyal and Dharmendra Pradhan, were also inducted as ministers of states with independent charge. A surprising inclusion was Smriti Irani, who took charge of the key portfolio of human resource development as the cabinet minister.

Controversial former army chief V K. Singh, who won from Ghaziabad, and former Congress minister Rao Inderjit Singh, who joined the BJP ahead of April-May elections, have also found a place in the Modi government.

The four-time Gujarat chief minister, the first to lead a non-Congress party to a majority in the Lok Sabha since independence, made history even as he took his oath in a function held on the forecourt of Rashtrapati Bhavan.

The participation of leaders of India’s immediate neighbours in South Asia conveyed Modi’s intention to work towards a stable neighbourhood. Instability in the neighbourhood has raised the risk perception for foreign investments and also prevented the region from realizing its potential. Modi is expected to hold bilateral talks with the visiting heads of state on Tuesday.

Although it doesn’t reflect the “cluster" promise adequately, the cabinet scores well on another parameter—the proportion of women in it.

On Monday, seven women ministers, six of them with cabinet rank, were sworn in— more than in any Indian government.

Uttar Pradesh, where BJP won 71 of 80 seats, sees nine of its representatives in the 45-member council of ministers. Maharashtra, where state elections are due later this year, has six. The BJP and the Shiv Sena won 41 of 48 seats in Maharashtra in the Lok Sabha elections.

Analysts say Modi could give representation to the states in which the BJP is yet to grow as a major party. Although there was talk about technocrats or experts being inducted into the cabinet, the list only features veteran party leaders, high-profile young leaders, and a few first-time MPs chosen to strike a community and regional balance. The only Muslim face in the government is Najma Heptulla, who joined BJP just ahead of the 2004 elections.

“It’s a very well thought-out cabinet based on the individual competence of each leader and in what area they can deliver. He may be using the remaining posts strategically before the state assembly elections," Mrug added.

In what could raise a few eyebrows, Sanjeev Kumar Baliyan, one of the accused in the Muzaffarnagar communal riots, has been included in the government. Baliyan, who won elections in violence-hit Muzaffarnagar, was named in the first information report on the riots.

Meanwhile, the official website of the new prime minister was up and running even as the cabinet was being sworn in. In a message posted on the site, it said, “Together we will script a glorious future for India. Let us together dream of a strong, developed and inclusive India that actively engages with the global community to strengthen the cause of world peace and development".

In an indication that he would be different from his predecessors, most of whom did not communicate with the masses directly very often, Modi, who used social media to his advantage in the run-up to the campaign, promised that he would be in direct communication with citizens.

“I envision this website as a very important medium of direct communication between us. I am a firm believer in the power of technology and social media to communicate with people across the world. I hope this platform creates opportunities to listen, learn and share one’s views."