The euro fell to its lows for the day after the announcement before settling down 0.25% at around $1.2570 and below last week’s peak of about $1.2638, which was its highest level since early July.

The EuroSTOXX 50 index of euro zone blue-chip stocks , which closely tracks swings in sentiment in the 17-nation currency bloc, was up about 2.4 percent at 2,500.15 points, its highest level since early April.

Seeking to back up his July pledge to do whatever it takes to preserve the euro, Draghi said the new plan, aimed at the secondary market, would address bond market distortions and “unfounded" fears of investors about the survival of the euro. 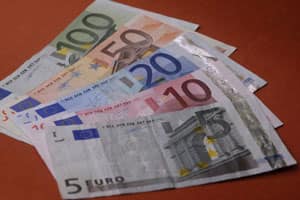 “Under appropriate conditions, we will have a fully effective backstop to prevent potentially destructive scenarios," Draghi told a news conference after the central bank’s monthly meeting.

“No ex-ante quantitative limits are set on the size of outright monetary transactions," he said, using the formal term for ECB bond-buying programmes.

Investors were on tenterhooks, waiting to hear how decisively the ECB would act to help bring down the borrowing costs of Spain and Italy, after disagreements among policymakers on the plan were played out in public last week.

Draghi’s statement at least met expectations, analysts said. With the bond-buying plan the focus of Thursday’s meeting, the ECB kept interest rates on hold, leaving its main rate unchanged at 0.75%.

Pressure on Draghi intensified after an unsubstantiated German newspaper report last week that Bundesbank chief Jens Weidmann had considered resigning over his opposition to bond-buying, although several sources say he has made no such threat and believes in staying at the table to argue his case.

Draghi appeared to have succeeded in securing overwhelming support on the Governing Council for a plan that Weidmann can live with, despite his apparent negative vote.

The Bundesbank chief had expressed concern that intervening in the bond market would break the ECB taboo of financing euro zone member states. Other ECB policymakers see a greater urgency to help Spain and Italy and prevent the euro zone crisis from deepening.

Draghi said the ECB would only help countries that signed up to and implemented strict policy conditions, with the euro zone’s rescue fund also buying their bonds, and preferably with the IMF involved in designing and monitoring the conditions.

Renewed ECB intervention in the euro zone’s bond markets is crucial to buy governments time to come up with a longer-term response to the bloc’s debt crisis when began in early 2010.

Spanish and Italian government bond yields have fallen significantly since Draghi said on 2 August that the ECB would buy bonds issued by Madrid and Rome. They fell further after Draghi fleshed out his plan to intervene on Thursday.

ECB debt purchases -- which would succeed the bank’s Securities Markets Programme that has been dormant since March -- would be suspended if countries did not comply with the terms.

With Germany’s constitutional court not due to rule on the new ESM rescue fund until next week, there was no prospect of the ECB intervening immediately.

“A number of investors expect that the button will be pushed without further ado, but it is a bit more complicated than that," Deutsche Bank economist Gilles Moec said.

In the debt markets, safe-haven US Treasury and German government bond prices, which had dipped before the ECB announcement, edged down further, while peripheral euro zone bond prices moved higher.

As a result 10-year German Bund yields were up 8 basis points at 1.5% on Thursday, with equivalent Spanish and Italian debt yields dropping to 6.1 and 5.32%, respectively.

Draghi also said the ECB was prepared to waive its senior creditor status on bonds it purchased -- meaning it would be treated equally with private creditors in case of default.

The central bank hopes that by removing private investors’ concern about being paid back last in the event of a sovereign default, they will not head for the exits if the ECB intervenes and buys bonds.

The ECB assumed preferred creditor status in Greece’s debt restructuring earlier this year, leaving private investors to suffer a writedown in the value of their Greek sovereign bond holdings while the paper it held was untouched.

“There is a problem if central banks insist on the preferred creditor status, because the more the public sector intervenes in the bond market, the less interest private investors will have," a central bank source told Reuters on Wednesday.

In another potential sop to the Bundesbank, Draghi said all bond purchases would be “sterilised" by taking in an equivalent amount in deposits from banks to avoid any risk of inflation.

The terms of ECB intervention will determine whether Spain seeks help.

Prime Minister Mariano Rajoy said on Sunday that Spain, the euro zone’s fourth largest economy, would consider seeking extra aid on top of an up to 100 billion euro rescue of its banks, but he wanted to see details of the ECB’s programme before deciding.

Asked about ECB bond buying and a conflict of interest between Spain and Germany, Rajoy told Germany’s Frankfurter Allgemeine Zeitung: “It is good to have principles in life. But sometimes it is also good to be flexible."

Draghi said bond buys would be linked to “strict and effective conditionality" and that purchases would be focused on debt maturities up to three years.

“The involvement of the IMF shall be sought also for the design of country-specific conditionality and the monitoring of such programmes," he said, adding that now it was up to the governments of the euro zone to act.