Budget allocation for health less than half of 12th Plan promises

Unless central and state financing is stepped up, the country's development will be affected, warn experts

New Delhi: The budget allocation for health in the five years to 31 March 2017 is less than half the total funds promised in the 12th Plan (2012-17), according to a parliamentary panel report.

The total budget allocation made by the Union government in the five years to 31 March 2017 works out to just 46.5% of the funding originally envisaged for the National Health Mission (NHM) and the department of health and family welfare, according to the report tabled in the Rajya Sabha on Wednesday.

The panel appreciated the high utilization rates of the allocated funds. The overall NHM releases made during 2012-17 were as high as 98%, implying that the allocated amounts are being utilized effectively.

However, the allocation deficit is reflected in the slow progress in infrastructure building. The 12th Plan targeted the construction or strengthening of 300 district public health labs to improve the quality of data and outbreak investigations. However, till February, only 111 labs in 29 states were functional.

Similarly, under the 12th Plan, burns units had to be established at 67 medical colleges and 19 district hospitals. But, so far, only 43 burn units, including 13 in district hospitals, have been approved by the screening committee for trauma and burns.

The department of health research is also facing a fund crunch. Though the 12th Plan outlay was ₹ 10,029 crore, only ₹ 3,066.60 crore had been allocated. 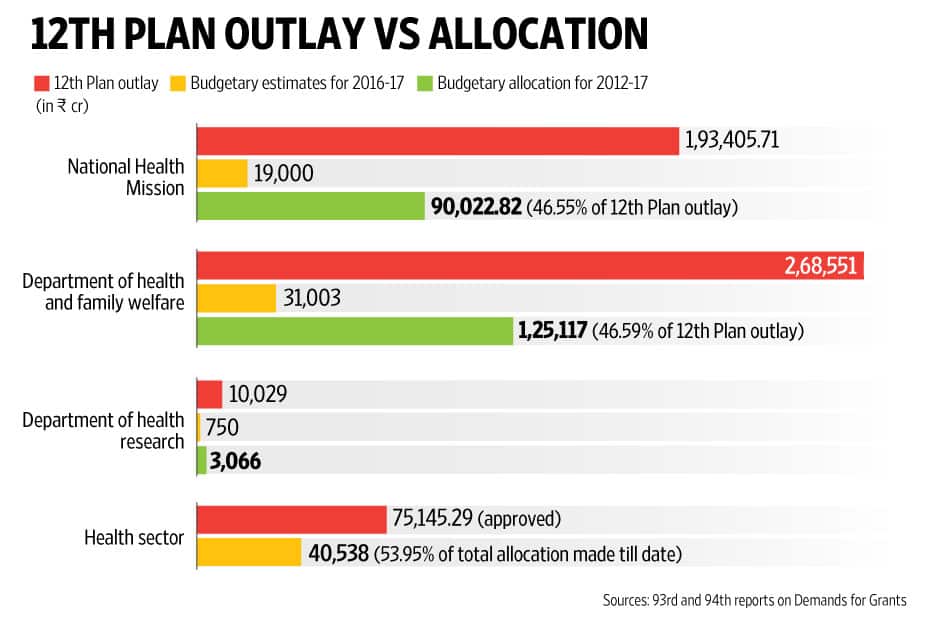 Premier institutes such as Indian Council of Medical Research (ICMR) have had to bear the brunt too. Its 12th Plan outlay was ₹ 4,770 crore, which was also the actual cost of schemes and projects approved by the cabinet. However, the ICMR has been given only ₹ 2,591 crore during 2012-17.

The panel also noted that barring a few states, most have no mechanism in place to ensure that the additional state health financing following the recommendations of the 14th Finance Commission indeed gets allocated and spent. While Madhya Pradesh, Odisha and Tamil Nadu have been able to effectively implement the new mode of transfer of funds from the state treasury to the state health society, others still have to catch up.

The panel observed that 220 utilization certificates (UCs) amounting to ₹ 3,223.72 crore and 307 UCs amounting to ₹ 4,302.61 crore are pending under the Reproductive and Child Health Flexible Pool and Mission Flexible Pool, respectively. Similarly, the amount involved in pending UCs pertaining to the National Urban Health Mission is ₹ 1,606.32 crore. A delay in furnishing UCs delays transfer of central funds which, in turn, affects capital expenditure to be incurred by states. The panel noted that the oldest pending UC is of the year 2005, which suggests that the problem is endemic.

“India has one of the lowest levels of public financing of health in the world. Central budget allocations have been stagnant for many years, sapping the strength of the health system and keeping many of the country’s health indicators at the bottom even in South Asia. Unless central and state financing of health is stepped up to improve health services, especially in primary care, India’s development journey will hit roadblocks," said Srinath Reddy, president, Public Health Foundation of India.