Srinagar: Police shot dead at least 11 people in Kashmir on Tuesday as Muslim protests against what they said was an economic blockade by Hindus over a land row began to morph into independence calls, officials said. 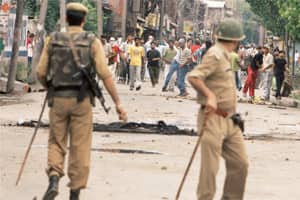 Violence swept up the neighbouring Hindu-dominated Jammu region as well, where one person was killed and several injured when Hindus and Muslims clashed.

At least 100 people were injured and 11 killed in a dozen separate incidents of police firing across the region. This came a day after four people, including a separatist leader, were killed by police trying to stop Muslim protesters from crossing into Pakistan. Muslim protesters shouted slogans against the government as they buried the separatist leader in downtown Srinagar.

“This is not protest against land transfer, in fact this is anger against India," Pakiza Dar, a college teacher, yelled. “Down with security forces, we want freedom," others shouted.

A dispute over the transfer of 99 acres of land to the Amarnath Shrine Board in June has polarized the state, split between the Muslim-majority Kashmir valley and the Hindu-dominated region around Jammu city, severely curbing trade between the two areas. As a result, traders in Kashmir are trying to sell their goods in neighbouring Pakistan. The protests have widened to become pro-independence rallies, some of the biggest since a separatist revolt broke out in the region 20 years ago.

The authorities have denied any economic blockade and said lorries, guarded by policemen and soldiers, were plying the region’s main 300km highway, the only surface link between Kashmir valley and the rest of India. The Union government said it was trying to find a solution through negotiations and help traders sell their goods across the border in Pakistan.

(Nigam Prusty and C.K. Nayak in New Delhi contributed to this story.)