Growth in Bihar driven by govt spending; still a long way to go

Growth in Bihar driven by govt spending; still a long way to go

Patna: In recent months, Bihar—a state that has historically been one of the weakest links in India’s growth story—has won praise for its 11% growth in state domestic product (SDP), or the total value of final goods and services produced within its geographical boundaries, in 2004-09. The figure matches that of industrially progressive Gujarat and surpasses the national average. But there has been scepticism about the accuracy of the data trumpeting the eastern state’s growth. 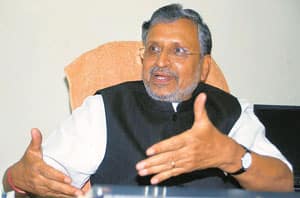 Bihar’s deputy chief minister Sushil Kumar Modi, in an interview in Patna, throws light on the source of the state’s growth and the need for tax incentives to attract investment. The 58-year-old leader of the Bharatiya Janata Party’s Bihar chapter says that even at this rate of growth, it may take the state over a decade to reach Maharashtra’s current SDP. Edited excerpts:

What has been the key reason for Bihar’s high rate of growth in SDP?

One of the key reasons has been the government’s increase in planned expenditure (or the expenses on developmental projects covered under the current five-year Plan). Between 1990 and 2005, the previous government would have spent less than Rs25,000 crore in a state that included Jharkhand (formerly the southern part of Bihar that was declared a separate state in 2000). Our government spent more than Rs51,000 crore on the planned side. This year the planned expenditure is Rs16,000 crore. There has been an increase in construction activity, in trade, in hotels and restaurants, and because of that we could achieve this big jump of 11.03% compounded average growth rate in state domestic product from 2004 to 2009.

What has been the source of this data and has the government learnt to effectively use data to communicate to people?

The methodology to calculate SDP has been prescribed by the Central Statistical Organisation. The state provides the basic data and that data is cross-checked to some extent and after minor modifications they put it on their website. So, those who doubt this data, I am surprised they don’t know the ground realities.

They say, “If there is high growth rate in Bihar, then why is there poverty?" So I can ask, “If there’s growth rate of 9% in India, why are more than 40% of Indians below poverty line?" Growth rate is a different parameter and poverty is different. If Bihar’s economic growth continues to surge at this rate for another 15-20 years, then it will have a great effect on many things, including poverty. We are trying our level best to sustain this growth rate. If Bihar continues with 11% growth rate for the next 15 years, then we will achieve Maharashtra’s current SDP. And by that time, Maharashtra’s SDP will be threefold of what it is today. So, we have a long way to go.

What is your outlook for the kind of investments you are hoping to attract into the state?

We have received investment proposals for more than Rs1,33,000 crore, with nearly Rs90,000 crore worth of proposals in the power sector. And I am talking about proposals that have been approved by the state cabinet. All the big business groups are in that list. It will add about 20,000MW of power in Bihar over seven-eight years if all these projects are implemented. But the biggest problem is that we don’t have coal. After the bifurcation of Bihar, all the coal has gone to Jharkhand. We have applied for coal mines, but we have not been given coal mines or coal linkages. For a backward state like Bihar if we don’t provide even coal linkages, then how are we going to become self-sustaining in power?

And what about other investments?

We have also received proposals of more than Rs20,000 crore for ethanol production. Most of these proposals are related to making ethanol directly from sugar cane juice. But according to the Central government, only sugar mills can prepare ethanol. So, again these proposals are pending with the state government. We are asking the Central government to declare Bihar as a special category state. Only then those who want to invest in industry will get exemption in excise duty and income tax. Bihar doesn’t have mines or ports. So who is going to invest in Bihar?

Still, the numbers show that there has been a jump in economic growth.

Now, there are 25 direct flights from various parts of the world coming to Bihar every week. And yes, we have seen about 27% growth in cement consumption compared with a national growth of just 9%. We also have more than two crore mobile connections. All this indicates the kind of growth that has happened in Bihar.