Home / Politics / Govt to miss divestment target for this fiscal

Govt to miss divestment target for this fiscal

Govt to miss divestment target for this fiscal

Mumbai: The government will miss its divestment target for the current fiscal by at least Rs1,000 crore following its decision to offer a huge discount for the follow-on public offer (FPO) of NMDC Ltd. 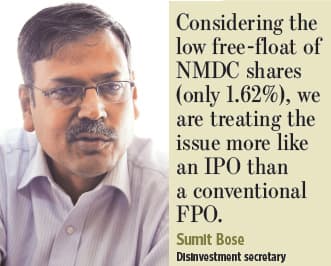 According to investment bankers, India’s biggest iron ore producer will offer shares in the price band of Rs300-350 apiece. Retail investors will get an additional 5% discount. The issue opens on 10 March.

At the upper end of the price band, the issue will raise around Rs11,300 crore, taking the total money raised through divestments to Rs24,931 crore in the year to 31 March. This is Rs1,027 crore less than the target of Rs25,958 crore.

If the price is fixed at the lower end of the band at Rs300, the issue will raise Rs9,711 crore, widening the shortfall to Rs2,689 crore.

The NMDC sale is the last divestment of this fiscal and will be conducted through a book-building process, which is typically used during initial public offerings (IPOs). In this method, a price band is offered by the issuer within which investors are allowed to bid and the final price is determined by the issuer only after bid closure.

According to revised estimates contained in the Union Budget 2010-11 unveiled by finance minister Pranab Mukherjee, the government planned to raise Rs25,958 crore in 2009-10 through divestments in public sector units.

According to Bsepsu.com, a website launched by the Bombay Stock Exchange (BSE), the government has raised Rs13,629 crore in the current fiscal through share sales in Oil India Ltd, NHPC Ltd, NTPC Ltd and Rural Electrification Corp. Ltd.

That means the government had to raise some Rs12,400 crore more to meet the revised divestment target for 2009-10.

Mint had first reported on 1 March that the NMDC issue is likely to be priced at a considerable discount to its market price, which is overvalued.

Analysts considered the market price to be high by valuation parameters such as the price-earnings (P-E) multiple and peer value comparison.

NMDC’s earnings per share is Rs8.62, according to Bloomberg data. At the upper end of the band, its P-E multiple stands at over 43 times, considerably cheaper than the 50 times it was quoting a week ago. From Rs140.30 on 9 March last year, NMDC shares rose to Rs571.80 on 19 January this year.

“Considering the low-free float of NMDC shares, we are treating the issue more like an IPO than a conventional FPO," disinvestment secretary Sumit Bose had told Mint last week.

Life Insurance Corp. of India is the second largest shareholder with a 0.76% stake. Only 0.23%, or 9.1 million shares, are held by firms and individuals.