Chennai: For H.N. Punyavathi, a 30-year-old resident of Bagepalli, a small town around 100km from Bangalore, securing a project associate’s job at a rural business process outsourcing, or BPO, firm around four months back was a turning point in her life. The college dropout had to face tough times recently when her husband lost his job and the couple was expecting a child.

“I am very satisfied and happy now," she says, speaking about her Rs4,000 per month job at RuralShores Business Services Pvt. Ltd, which she joined in March. “People at Bagepalli are very lucky—we have a BPO centre in our town." Her husband, too, is earning again—he has started a coconut wholesale business, and the couple can dare to dream once more. 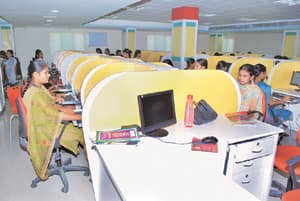 Rooted in reality: Workers at the HDFC Bank’s BPO centre in Tirupati, Andhra Pradesh. Employees are involved in processing non-core activities, such as details of customers who have opened bank accounts.

RuralShores is one company which has set up its first centre in Bagepalli with 45 project associates. The Bangalore-based company, which has HDFC Bank Ltd as a strategic investor, is now in the process of getting two more centres operational in Tamil Nadu and Bihar.

Murali Vullaganti, chief executive officer, RuralShores, says: “(We have started losing) the advantages of the offshore BPO model that were there 15 years ago in terms of cost, quality, scale and speed (and) control to other countries like China. For the industry to find the next edge, the only way to do (it) is (to) take it to the rural areas."

The company plans to set up 100 centres in the next three years in various parts of the country, with the tally going up to 500 in seven years. “There is no point in setting up one centre here and the other centre there, the idea is that there should be a huge impact in the rural areas," says Vullaganti. Each centre will have around 100 seats and can run two shifts; this would increase the employee strength to 200.

For positions such as those of team leaders, the company depends on employees who have studied in the metros but who have rural roots. Since these employees have a rural base, they are agreeable to a rural posting, according to Sreenath N.R., head of human resources at RuralShores.

N. Karthik is one of those who has returned home to take up a job at a rural centre. Karthik was working with an insurance company in Bangalore and found the work pressure there too great.

So when he heard about RuralShores setting up a centre in his hometown, he joined as a project associate. “There were a lot of family problems at home and this job gave me an opportunity to stay back and work," he says.

Raju Bhatnagar, vice-president, BPO and government relations, National Association of Software and Services Companies, or Nasscom, puts the average salary levels at these rural centres at Rs6,500-7,000 a month.

Other companies such as Adventity BPO India Pvt. Ltd, Tata Business Support Services, a wholly-owned subsidiary of Tata Sons Ltd, and HDFC Bank have set up rural BPO centres too and are looking at similar ventures in more locations.

Most of the employees at these rural BPOs have studied till class XII, the minimum educational qualification these centres seek, with a few of them being college dropouts. The rural BPOs train them in English-speaking skills, soft skills and processes for six-eight weeks, following which they are ready to take up assignments.

“More than 50% of the employees at the rural centre are women. Working at the centre helps the employees save money for their marriage, pay off debts, buy sewing machines and cows and buffaloes for their families. We do not spend money on retraining, which is the biggest advantage," says A. Rajan, country head, operations, HDFC Bank. Due to the commitment of employees, Rajan expects the centre to break even in “six months to a year".

HDFC Bank has tied up with the employment generation and marketing mission of the department of rural development in Andhra Pradesh to identify young people who could be trained and employed by the Tirupati centre. The employees there engage in processing the non-core activities of the bank, such as data-capturing details of customers who have opened accounts with the bank.

RuralShores runs its own centre in Bagepalli and plans to do so in Vellore in Tamil Nadu too. However, it plans to tie up with local entrepreneurs for its other centres, so that each centre would be a “separate legal entity". The company is in talks with a “major steel manufacturing plant" to set up BPO centres near all the manufacturing facilities of the company. Vullaganti refused to divulge the identity of the company as talks are in the initial stage.

These rural centres face quite a few challenges. Among the bigger challenges Rajan has faced are “getting (broadband) connectivity in place" and “supply of electricity", besides moving engineers from the city to service the hardware components installed.

Commenting on the business model of a rural BPO centre, Bhatnagar says: “It has to be a hard-core business proposition. The approach and rigour should be no different than for a revenue-generating model."