Bangalore: The human immunodeficiency virus, or HIV, infection is draining the global public health systems, has infected 2.7 million people and caused two million deaths in 2008, but things could get even worse, warn scientists—the emergence of a wave of drug-resistant strains of the virus could hinder efforts to control the pandemic.

Click here to watch a slideshow of graphics from the Science study, depicting how HIV drug resistance could soar.

Using a complex network model that takes into account single-, double-, and triple-resistant strains of the virus, a team of US researchers report in Friday’s Science that there’s a threat to global public health from strains of HIV that are resistant to traditional antiretroviral treatments.

This model, they say, can be used to predict drug resistance in any place where individuals are being treated with antiretrovirals (ARVs) for HIV infection, including India, where even the second line of ARVs are now part of the national AIDS control programme.

This is a very “novel" study that discusses dynamics of transmission of the drug-resistant HIV strains based on the data collected in San Francisco among men having sex with men, says Ramesh Paranjape, director of the National AIDS Research Institute in Pune. 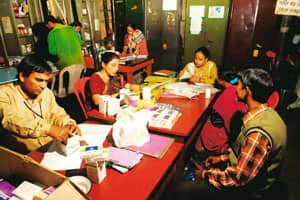 Dangerous cure: Medical officers handing out monthly doses of antiretroviral medicines to two HIV+ patients (back to the camera) at the Calcutta Rescue Clinic, Tala Park, in Kolkata. Indranil Bhoumik/Mint

While using HIV prevalence and resistance data from San Francisco, the model accurately reproduced the documented evolution of transmitted resistance in the city over the past two decades. It showed, surprisingly, that many of the drug-resistant strains which have evolved over the past 10 years in San Francisco are much more transmissible than has been previously thought.

The research also reveals that while effective treatment has kept the transmission of resistant HIV under 15% in San Francisco, a full 60% of the resistant HIV strains in the city are capable of causing self-sustaining epidemics.

Recalibration of the model for a new region would require prevalence and treatment data such as the type and duration of the drugs being used, their effectiveness in suppressing viral load and reducing mortality, rates of drug resistance, and the fraction of people needing the drug who actually take it.

“This isn’t just about San Francisco," stresses senior author Sally Blower, director of the Center for Biomedical Modeling and a member of the University of California Los Angeles AIDS Institute. “San Francisco is like the canary in the mine. In fact, the most significant implications of our work are for countries where treatment is just being rolled out."

Paranjape agrees, although he admits there is a need for generating more systematic data in India. Based on current field data, the ARV resistance level in India is “on a par with Europe, Thailand or Africa", according to an expert at an HIV/AIDS care and research organization in Chennai, who doesn’t want to be named because he is not authorized to speak to the media.

However, it’s the likely scenario in developing countries that worries researchers. Their modelling shows the proposed strategy for HIV elimination by the World Health Organization could “inadvertently make things worse".

The recently proposed “universal test and treat" strategy of WHO includes universal testing every year and is based on first-line regimens.

Blower says this strategy has been decided based on WHO’s modelling study published in the medical journal Lancet and is simplistic, based on the assumption that drug resistant strains would not evolve and be transmitted.

“If the WHO model included (as our model does) that drug resistant strains will evolve and be transmitted they would find (as we have found) that HIV elimination is very unlikely and that their strategy will lead to a great many people becoming infected with drug-resistant strains," says Blower.

“Therefore, I strongly believe that the WHO universal ‘test and treat’ strategy for HIV elimination is very misguided and could lead to very serious public health problems in resource-constrained countries such as India."

Though the Chennai expert says the WHO strategy will be implemented with “appropriate human subjects’ approval and ethical guidance only", the present findings build a strong case for using drug resistance data as a basis for future strategy.

Notwithstanding the fact that the study is done among the homosexuals in San Francisco, which is a fairly well- networked community, Paranjape says the study provides an opportunity to “recalibrate the model and generate very important information that may have impact on treatment policies".