The Employees’ State Insurance Corporation, or ESIC, provides health insurance to at least 10 million workers in the organized sector and has a corpus of Rs17,000 crore. 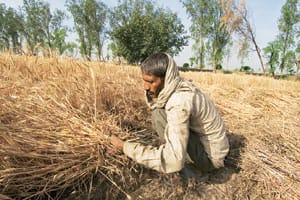 Left out: Currently, 94% of India’s workforce is employed in the unorganized sector with little or no access to social benefits. Ramesh Pathania / Mint

If Parliament approves ESIC’s plan, it will mark a significant shift in the corporation’s primary function, which now involves providing health insurance to workers employed in factories using electricity that hires at least 20 people, and in industrial units that do not use power and employ at least 10 workers.

Currently, 94% of India’s workforce are employed in the unorganized sector and have little or no access to social benefits. ESIC now wants to enter into an agreement with the Union government to roll out RSBY, through which a worker and his family can be insured for up to Rs30,000 a year and get medical treatment and travel allowance for visiting private or public hospitals.

Several public and private insurance companies have tied up to take RSBY to small towns, villages and industrial clusters, funding of which will be contributed by the Union and state governments.

To be sure, some experts say ESIC’s effort will achieve limited success in providing adequate service to workers in the unorganized sector.

“This will not address the segment we have been talking about, which is 91% of the unorganized workforce, who are either agriculture workers, or those who find employment in units that employ less than 10 people," said Ravi S. Srivastava, member of the national commission for enterprises in the unorganized sector.

Each medical college ESIC plans to set up will cost between Rs400 and Rs600 crore. Each of these will include a 300-bed hospital and will have a 25-acre campus, said B.C. Bhardwaj, ESIC’s insurance commissioner.

India has an acute shortage of medical practitioners at only six doctors for 10,000 people, compared with the global average of 15, according to rating agency Crisil Ltd.

ESIC is negotiating for land in some states and in some others, such as Puducherry, West Bengal and Maharashtra, it already owns land for this purpose, Bhardwaj said. The corporation will set up the first medical college this month at Mandi in Himachal Pradesh, he said.

The number of workers insured under ESIC health insurance scheme has risen with the rapid growth of industrial activity. Last year, about two million workers were insured. But accessing quality service has been difficult because many hospitals it runs are in a state of disrepair.

A majority of the hospitals, which have an average of six doctors each, were set up during the textile boom from Mumbai to Kanpur, but they are now plagued by low occupancy and poor amenities due to closure of these mills and shifting of commercial establishments to newer locations.

“Many ESIC hospitals are not well-equipped and patients often have to be shifted to government hospitals where they are not treated on a par and get caught in bureaucracy," said Rajendra Mamgain, managing editor of TheIndian Society of Labour Economics, which brings out a quarterly edition on policies relating to labour economy.

Chaturvedi said ESIC’s biggest advantage in rolling out RSBY is that it has infrastructure to?support?the?programme: 144 hospitals, 23,923 beds, 2,000 clinics, 610 cash-benefit outlets and 50?regional centres.